The Nights Get Creepy On The Farm

I may or may not have had quite a bit to drink last night. There's a picture in a previous post of a bottle of Bulleit bourbon on the road. In that picture is about 2/3rds of a bottle. If I were to take that same picture this morning, there'd be about 1/3rd in the bottle. And that's ok. I had fun.

I decided, after Dad went away and after I had typed the first of what appears to be three blog entries last night, that I should take some pictures. Now...mind you I'm using a point and shoot camera, not my normal Nikon kit (which I have pretty well dialed in for nighttime photography). This point and shoot, to be fair, is a very nice camera that was a gift from a couple of friends of mine, so it's almost to the feature set of an SLR...so I was hopeful.

I did manage to get some shots of stars last night. I'll need to enhance the pix in Lightroom, but I was pretty pleased with the results. 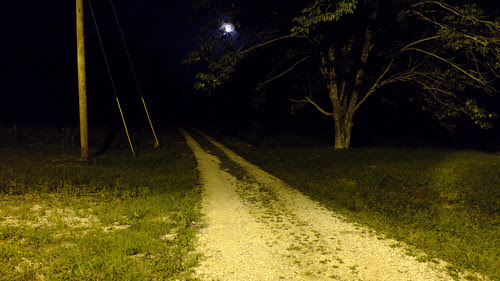 I think the main difference is that I haven't quite figured out 'bulb' mode on this camera yet. But when I do...it'll be a pretty powerful force for taking the longer exposure shots. 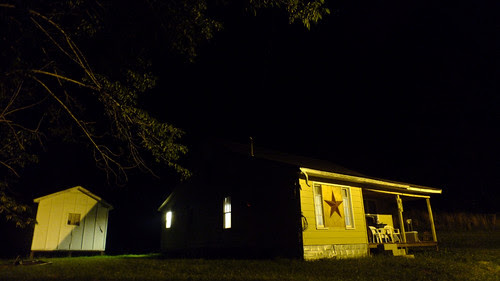 I'm not sure when I went to bed. I think it was in the neighborhood of 2AM. I probably took 40 or 50 shots...maybe 10 of which will actually be good enough to post, but it was all about the process last night.

One thing I noticed...and the drink was draining was the fact that when it got dark, it got hella dark. There is no light pollution, because, well, there's no light.

And I noticed something else. The mind gets pretty funky in the absence of light. It was as though everything became more aware for lack of a better term. Noises and movement in the woods that could easily be explained away in the light of day were that much more ominous on a dark windless night.

I am constantly in awe at how much this place touches me deep in my soul.

This has been a fucking fantastic weekend. And the fact that I got to spend it with my Dad has made it doubly so.

After hitting the sack at about 2...I had a pretty peaceful slumber. Well...there was a weird dream about a Best Buy kiosk, my mom, and a missing suitcase and car that were inexplicably tied together.

But that's a story for another time. For now, it's time to finish up the last of the cold cuts, pour out our water, and pack up for the journey back to 'civilization.' And checking the calendar for when I can get back down here again.

To those that are fathers, enjoy your day.