You Will Meet Yourself On The Road Coming Back

On the way home from the Warrior Dash on Saturday, I had pretty much composed this entire post (note to self, start carrying recorder, it's much too difficult to try to be insightful and clever this long after the original ideas were birthed).

What I love about the interwebs...or technology in general is that, as you're reading this, you have no idea that I started it last night...got too tired to finish it and resumed where I had left off the next day at lunch.

Well,...you had no idea until just now when I spilled the beans.

I am still recovering from Saturday's Warrior Dash. It was physically the most demanding thing I have ever done. Second, perhaps only to the rehab I had to go through after the complications from my open-heart surgery.

It was also, however, one of the most taxing things spiritually I have gone through in a while. Sure...there were other people there. At least 500 in each heat. And over 25 heats throughout the day. But I felt alone. I wasn't there with friends (although later I learned where some friends were hanging out and could have met up with them)....I didn't have anyone there that was rooting for me.

I didn't realize until later, much later that I needed to be alone. If I were caught up in the emotions of having people there, I would not have learned the lessons I needed to learn.

It was truly a race...a challenge against myself.

And it kicked my ass.

Many of my friends and family have said 'well...you finished it...that means you won.'
I posit that no, it does not mean I won. It means I finished. I was not competing against anyone but myself. Todd vs. Todd. In that scenario there cannot be a winner or loser. Either Todd finishes or Todd does not finish.

I finished. But the course won. Did it beat me? Not necessarily, but it beat the hell out of me. The course definitely had the advantage for the entire race, except perhaps before I started and didn't know what it was capable of. At that point, I thought I still had a chance of pwning the course.

Foolish mortal was I.

After hurting my foot on the first (or was it the 3rd) obstacle, I quickly realized that I would be walking the remainder of the course. I was disheartened by this at first. I soon came to recognize it as a blessing.

It's funny how many things I learned about myself. I learned that until about halfway through the race, I still cared what people might be thinking of me. This fat guy who was walking a race he had no business being in in the first place (I wasn't in a happy place for a portion of the race and slipped back in to FatTodd thinking....something about thinking I was going to die after climbing the 4 steep hill which serves as a ski slop in the winter months).

And then I as I was passed by a pack of svelte (gazelles?) runners, I noticed a butterfly pacing me in my walk. And then I looked around at the woods I was walking through. Sure, the path was muddy as hell, but the trees and nature all around were beautiful. I realized that I was seeing...really seeing something that many people in the race just passed by.

The walking prevented me from getting too winded. I wasn't ready or skilled enough of a runner to actually set a pace I could maintain. The forced walk helped with that.

So how the fuck could they judge me? And more importantly, why on earth was I so concerned that they would be? FatTodd died again at that realization. I hope I won't be seeing him any time soon.

I finished the race. I walked a 5K obstacle course (or as I like to call it, Hell) in 95 minutes. I participated in and overcame every obstacle in my patch, including jumping through fire to get to the finish line.

If there's a more perfect metaphor for my life right now, I'll be damned if I can see it.

I'm a warrior.
And now for some random pix. I didn't have a camera that I felt comfortable taking on the course with me, so the shots are pretty much before and after I ran...er walked it.

This was pulling in at 12 to park. 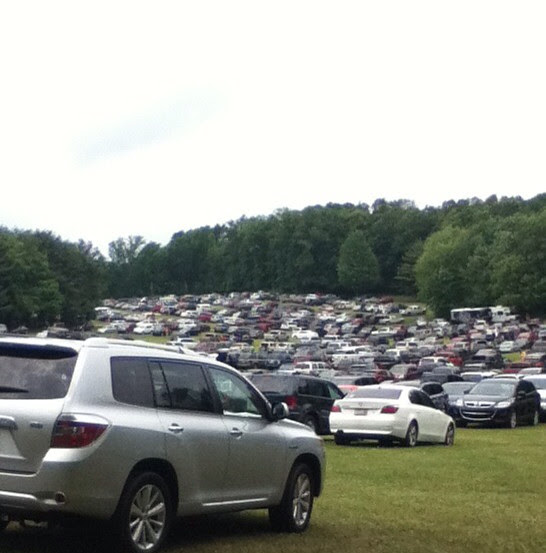 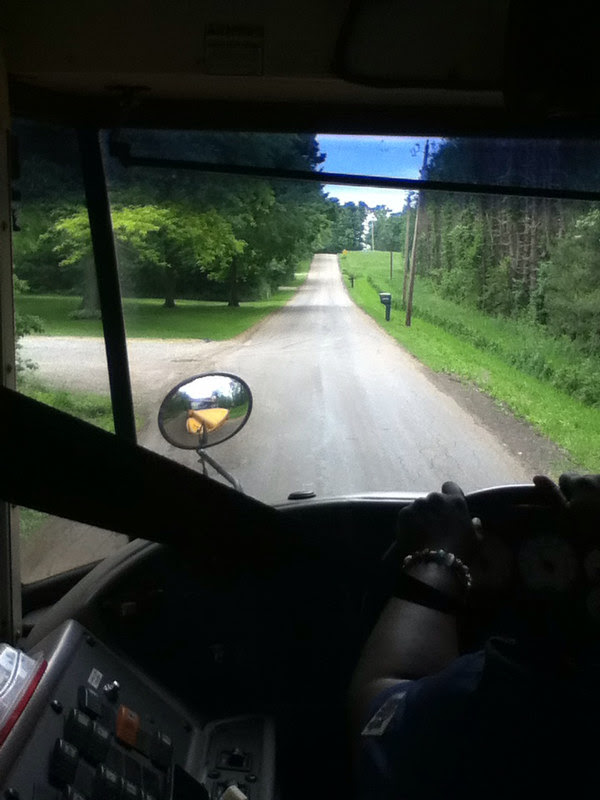 On a very special episode of Life Goes On... 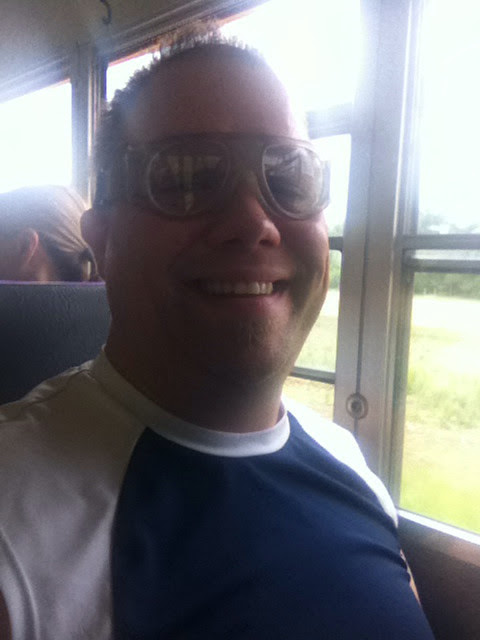 Walking up to the main gate for the event. 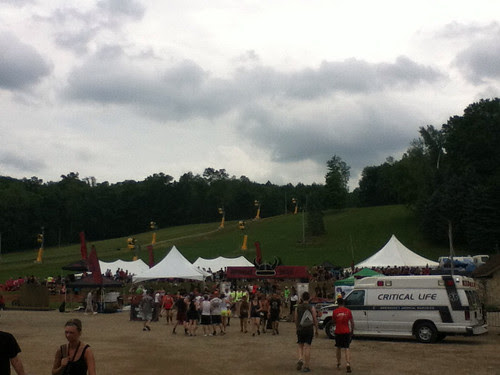 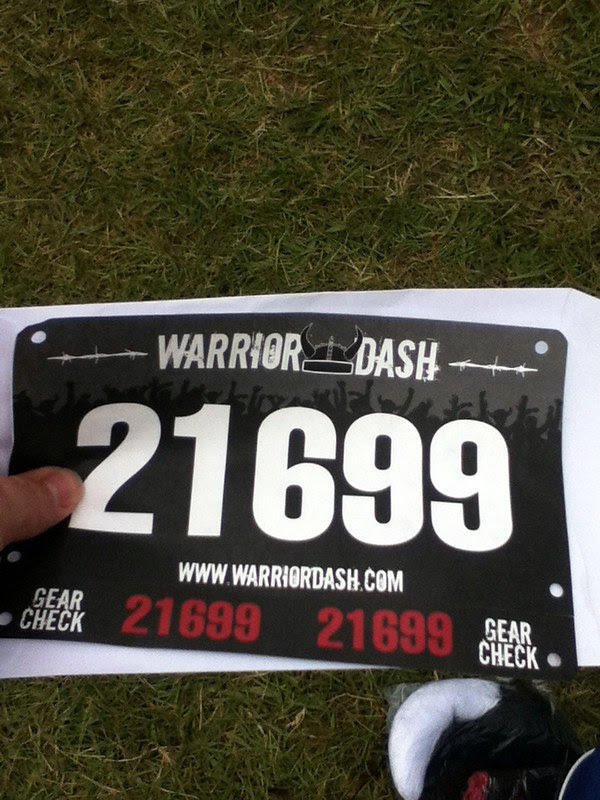 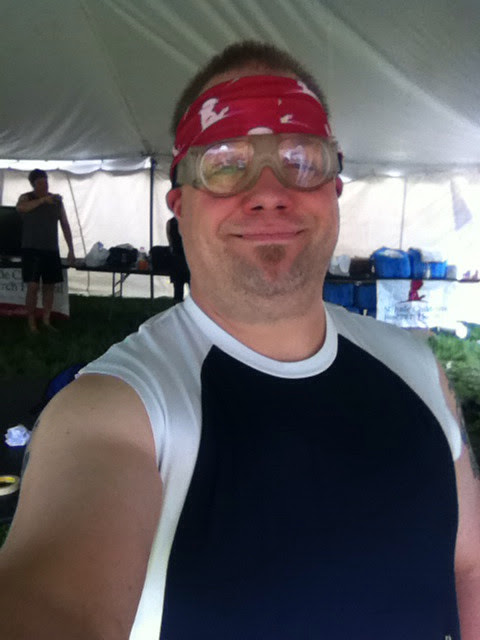 This wasn't my heat, but this is the walk up to the starting gate. 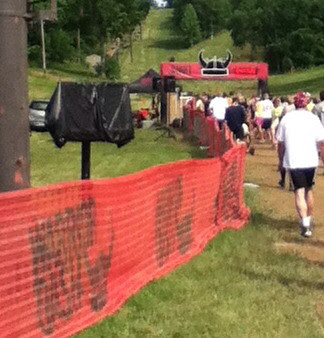 And this is the finish. Which I saw about 95 minutes after I started. They are on the top 10 list of longest minutes of my life. 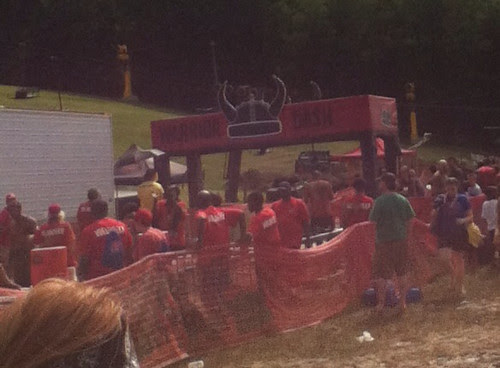 The flag at the finish. 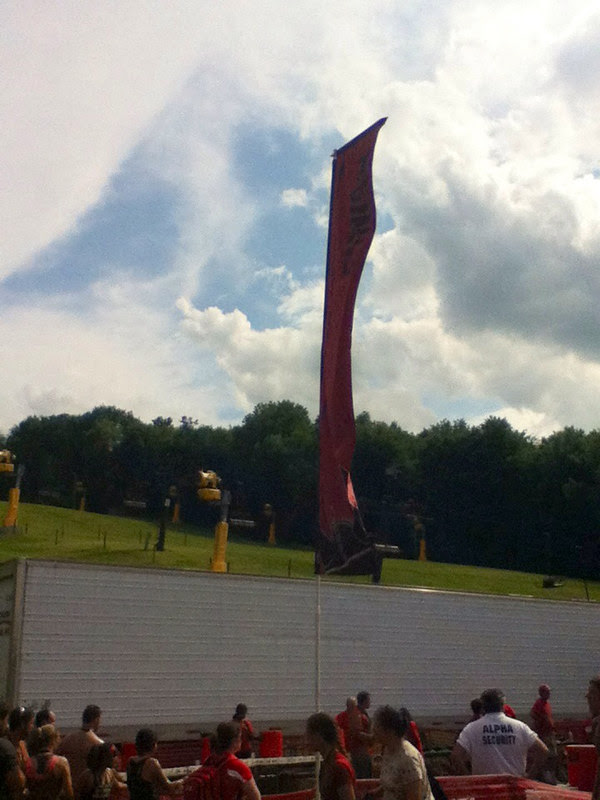 This is me AFTER I washed off. Still muddy. 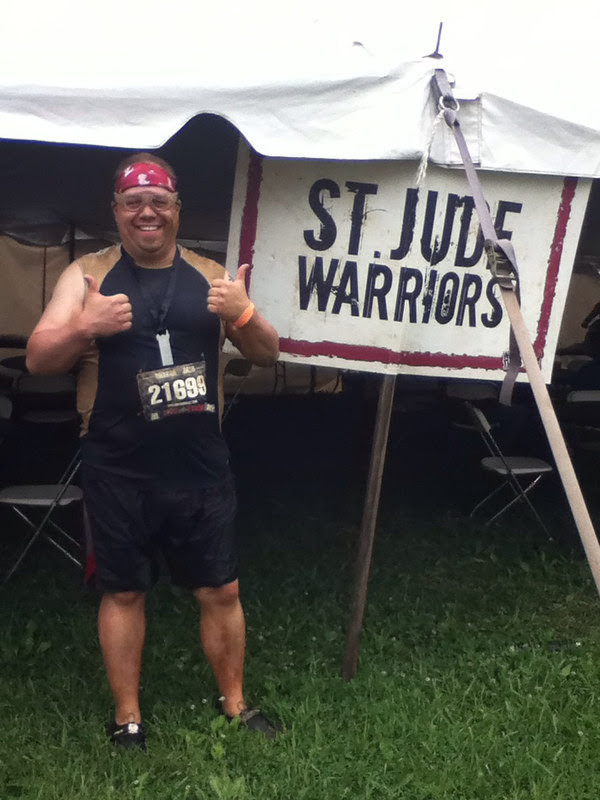 I am a survivor. And a warrior. Fuck yeah. 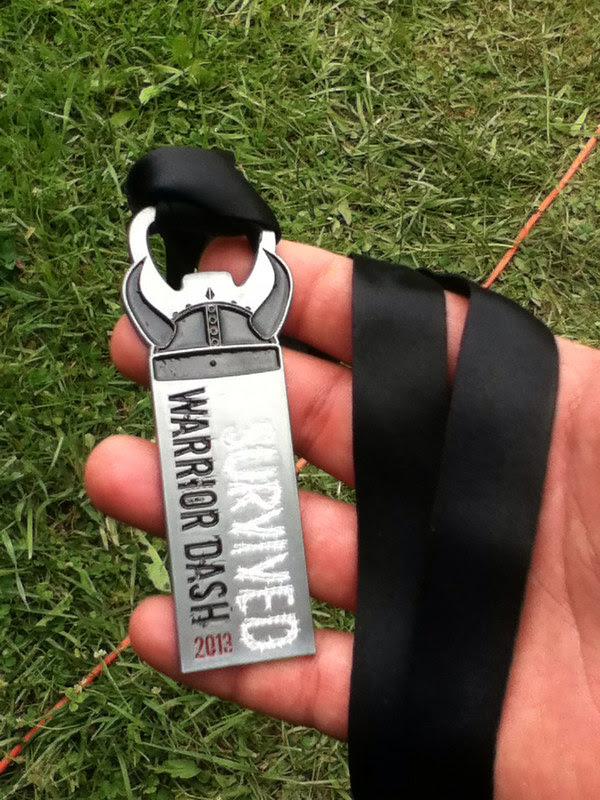 The bib and medal. 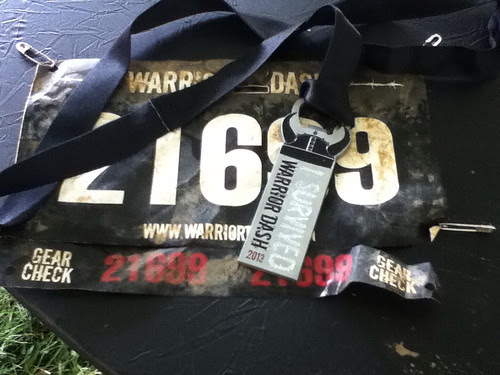 Free food in the St. Jude's tent. Yes, that's BBQ beef on my hot dog. Don't judge me. I just noticed the water was 'nirvana'...very fitting. 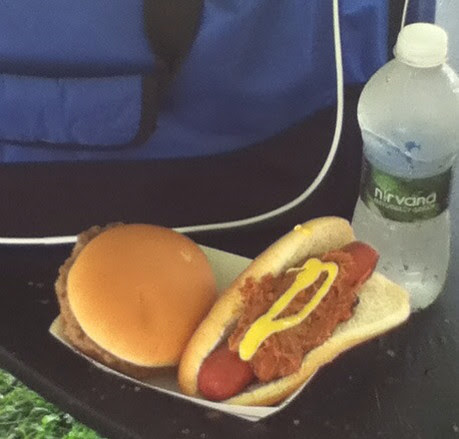 The free beer token/timing chip. I needed neither that day. I wasn't there to best a time and I gave the free beer away (something about dehydration and exhaustion). 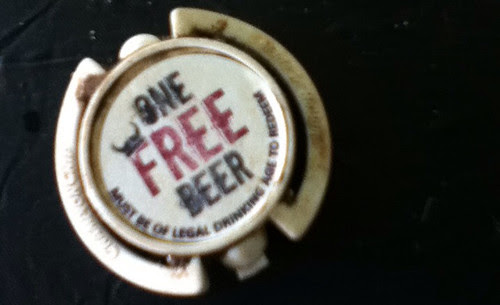 The remaining shots are people I don't know and fairly random. Enjoy. 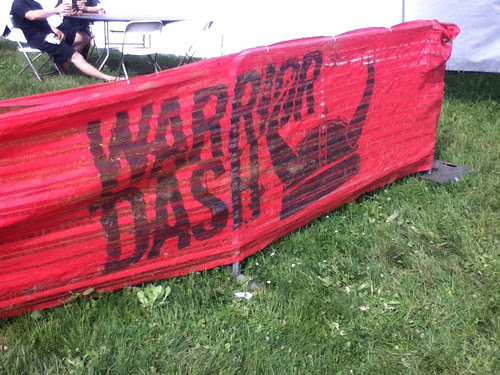 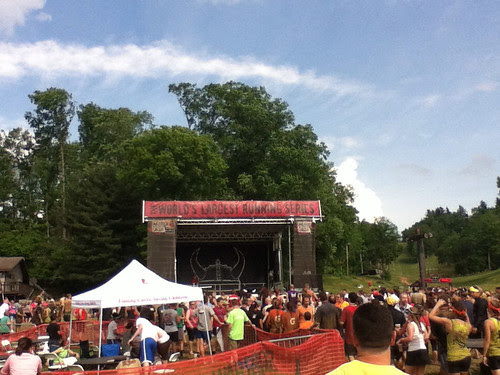 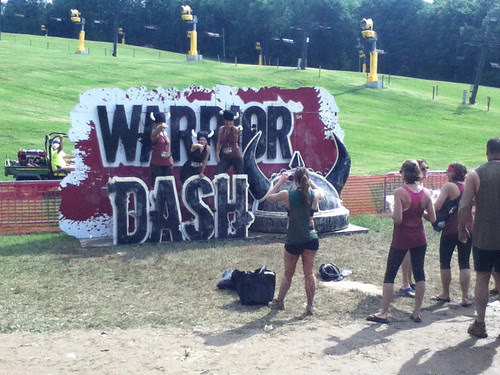 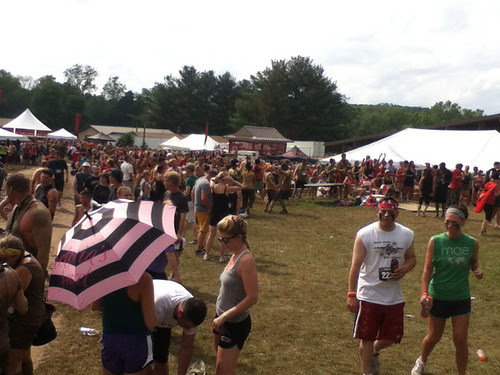 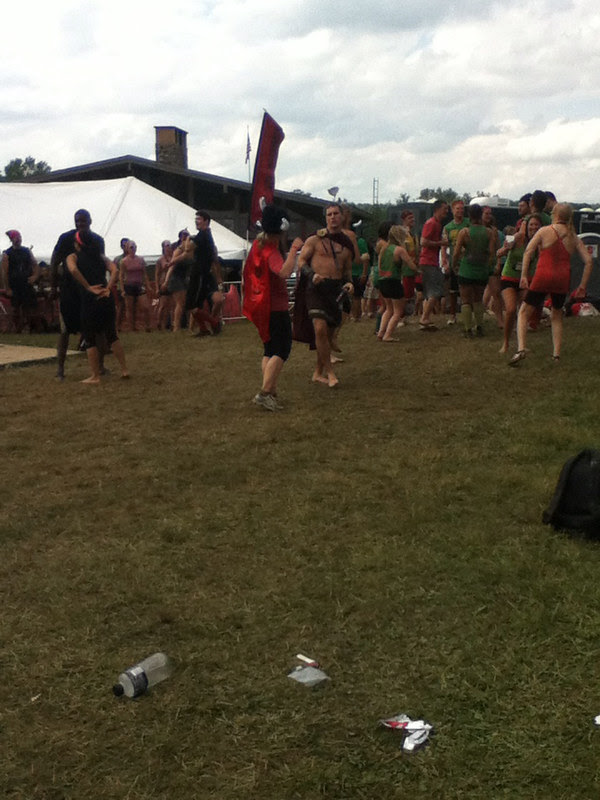 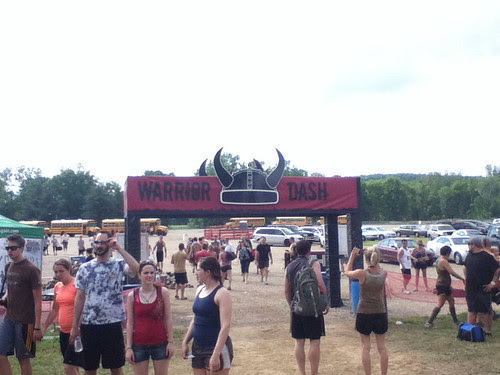 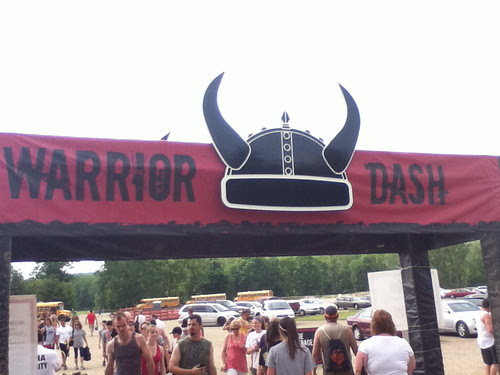 My last look before heading home.
I beat you, bitch.