So...long time readers and lurkers who have gone back and read through past posts will know that I used to frequent Brew-Stirs on Sunbury Road. It was a Friday/Saturday night tradition. And by tradition I mean it was something I did to be able to function in my situation for the rest of the week. Sure...I knew the marriage was far from ideal, but by hanging out with my 'friends' I could at least pretend like there was a bright spot. And the astute observer (pun intended) will note that the bright spot should have been my home life, it wasn't.

So now, because of what that place represented to me (an escape, if you will), when I go there...it brings back those feelings. It's a little too close to what used to be my house (stumbling distance, actually). And because if that, I think that whenever I go, I'm reminded of that former life.

And I don't like those feelings. Ironically, those feelings are used to be what I went to Brew-Stirs to get away from. Now, going there dredges up those feelings. It's a weird catch-22. I used to enjoy going there. Now it's just weird. And last night, when one of the bartenders..someone who was more than an acquaintance (but not quite someone I'd call a friend)...basically gave me shit for 'getting fat again and letting myself go,' I knew that it was probably time that I faced the facts. I have, it seems, outgrown Brew-Stirs. It's time for me to put that one up on a shelf as a time and place that got me through a lot of tough times and enjoy the memories I made there. But it's also time to move on with my new life. Whatever that actually entails.

In that same vein, I went to a party for a friend today. A friend and former neighbor from that old life. His house is right next door to the old house. I was assured upon arrival that the ex wouldn't be there until much later as she had rehearsal (natch). And that was fine. I was actually planning the whole way over what polite chit chat I could have with her and mentally running over the blue prints of their place in my mind so as to have the plan of maximum avoidance down pat. Thing is...I'm not afraid to see her or interact. I just don't want to.

All of this comes on tope of having a holiday...the first holiday as a single man. Normally we'd go as a cul-de-sac and hang out and watch the fireworks. Because I assumed that the same would hold true this year, I avoided that scene. And it was kind of a bummer. I do like seeing fireworks. I just have to scope out a new place to watch them from now. As it so happens, the ex did not join the neighbors...and I wound up jamming over at a friend's house for the evening. So...it all worked out. Except I didn't get to see fireworks. Oh well, there is always next year.

And the year after that.

As time passes, I know that this will all get...not necessarily easier. But it will become my new normal. And I'm ok with that. Speaking of the new normal, I'm chilling at the community picnic table (trying out the dryer sheet mosquito repellent) as I type this. A nice cool summer breeze is blowing and it's just a very chill environment. I have some extra beers in the coolers for any inquisitive neighbors. Life is good. 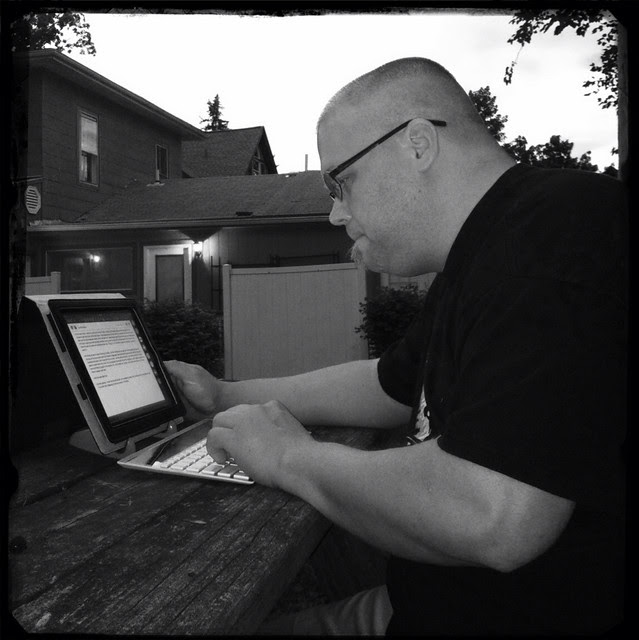 OK. I went for a good twenty minutes before getting bitten three times. The dryer sheet mosquito repellent thing is bull shit. Of course it probably has to be a very certain kind...Bounce with DDT or some shit like that. Either way...I'm inside. I'll get some citronella candles or some danged bug spray for tomorrow. Because I can see sitting at that picnic table and writing as being very therapeutic.

Alright. I had some ideas for the next book that's bubbling up inside me (no...not that one...this is one of those 'autobiography up to now' kind of books. Or...as I like to call it, cathartic discharge).

With that, I take my leave. Gonna finish this beer...peruse FaceTimeSuck Book for a bit, then maybe get a few pages out on that other book. And probably a few more beers in there before calling it a night.

Peace Out my friends. Have a good evening (or...whatever part of the day it might be as you read this).