Going For A Quick Jog

Today was kind of a crazy day.

I write that opening sentence sitting in my living room. In the dark. Lights out save for the fluorescent over the sink in the kitchen, the glow of the iPad on my lap board and the lightning that is peppering the sky outside (of course I left the curtains open for that, duh).

This morning didn't start out too crazy. I cleaned up a bit. I did dishes. I got my laundry ready to do. I got the canvas laptop bag out of the himalayan storage area it was hiding in (recycling my bags keeps me from getting new ones and forces me to work on appreciating shit I already own. It's pretty much the only way I justify shopping-therapy).

The thunder storm sounds like it might actually kick back up a notch and that's cool. I love thunderstorms. I would be writing this on my wraparound porch right now, watching the thunderstorm from a front row seat. If I had one.

As YYZ is kicking in, there's a knock on my door. Surprisingly, the knock is the rhythm of YYZ. Darrin, my best mate from my college days (and after) comes strolling in. The surprise registers on his face too as he realizes YYZ is on.

The last time he was here was a week or so after I had moved in. There were boxes everywhere and I don't think there was really too many places to sit. Now the place is mine. It's home. It's my home. And it's a good feeling. We discussed the ups and downs of the first holiday of being single in quite some time (nearly11 years). And how it really kind of just sucked balls. I'm hoping it didn't suck for her. I'm guessing she's probably embraced her new life more quickly than I. But...enough of that.

We decided to head over to MicroCenter for the 3rd time in as many days to take advantage of the Friends and Family discounts. As we were leaving the neighborhood, I almost ran in to a jogger. It was an honest mistake. I didn't look left right then left again. And as he passed "Look both ways, asshole" was the angry retort I got. "I'm sorry" was my reply. "Fucking Cocksucker" was the follow up. To which I just said "Nice attitude jack ass. I already apologized, fucking let it go." He said something about being a dick and kept running. Which...meh. That was fine. We headed over to MicroCenter.

The lesson, boys and girls...always look both ways before running over joggers.

The jogger helped me solidify a theory that I had started to formulate when I got the 'fat' comments from the bartender-dude on Friday. And that's this....the quicker someone escalates their reaction, the more likely it is that they are actually projecting some of their own baggage on to you and it's not actually anything you did (or at least nothing you did to the degree that merits the intensity of their reactions). I also realized that I really do hate jogging.

MicroCenter was mostly uneventful. We headed back to my place, dropped off the loot and headed Uptown. Wings and Graeter's were the order of the afternoon. Tried some Hot Teriyaki and Darrin had the hot jalepeno.

As we were walking back, we stopped in Cinda Lou's. I had never been. I figured it to just be a vintage store (which was cool in its own right). I was going to pick up one of the 'Rockin' the Ville' t-shirts (which I will do Friday). And then I saw the back of the store. The back room of the store was still the back room like it used to be when it was Sour Records. And my heart did a little happy dance. Seriously. A happy dance. I knew now that I had a least a Saturday afternoon or two of exploration in there. So...yay!

We came back and diddlefarted around with some different streaming videos and then commenced with dinner.

I'm not really who started the conversation on Katy Perry. But before I knew it. We were watching the Katy Perry movie "A Part of Me."

I'm not going to lie. I liked it. And I'm also not going to lie. I like her music. I'm really thinking she's on my list of concerts I have to see. I think I missed her on her last stop through here, but if she hits CBus again...I'm gonna be there because the show just looks fun. The best part though was looking over and Darrin knows all the words. Not just to the radio friendly cuts that are in the movie. No..motherfucker knows the obscure shit. Haha. Darrin kicks ass. Seriously. You don't even know.

There was a scene in the movie where Russel B ended the marriage (via text of all things). And later someone in the crew was like 'you still miss him?' and she cries. Because she does.

And I get that.

I mean. I know that it's over. I know that we won't reconcile. And at this point, I don't even know her anymore. But I miss her. I don't miss the her that she was when we split up. I miss the her that she was 11 years ago. And that's not fair. Really. Because who the fuck is the same person they were 11 years ago. Are you? No. I'm sure as shit not. I'm not even the same person I was last year. But that doesn't change the fact that sometimes I still think of those times. I mean, shit, I've only been out of the house for just over 3 months. It's still relatively fresh yet.

Time doesn't heal the wounds. Life heals the wounds. Time puts the salve on your mind and soothes the memory of how you got the wounds in the first place.

My mom posted this to my wall today. And it's cool for a lot of reasons...not the least of which is that my mom never swears. So...I leave you with this...because my mom fucking rules. 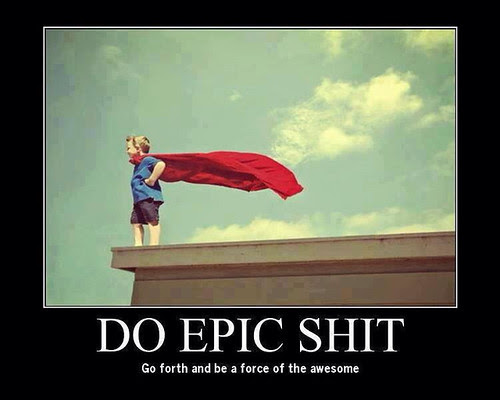 I'm gonna go work on some more of the biography as this thunderstorm works itself up to a respectable din. Have a kick ass evening (and an even better tomorrow) my friends!