Today was a big day. A big day that started yesterday evening about 5 O'Clock. I was test driving a new massage therapist (LMT) to see if they might be able to alleviate some of the (fuckinggodawful) pain I've been dealing with in my neck/shoulder/back/arm.

Turns out he hit all the areas that were giving me problems. I left there already noticing a difference. I went to bed hopeful that I would actually sleep through the night. Went to bed about 10:30 pumped for a full night's sleep.

Then...like clockwork, I'm up. 1:30AM. But not from pain. From the office calling me with an system down issue. Fuuuuuuuuudge. I guess I'll be testing the full night sleep theory tonight.

Had my visit with the neurologist at OrthoNeuro today. That went...uneventfully. I took my X-rays. 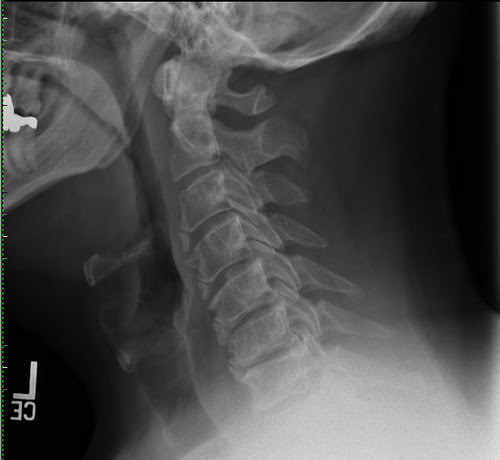 Apparently what the radiologist diagnosed (or rather read) as a narrowing of the vertebrae causing a pinched nerve is NOT what's going on. Nope. It's good old fashioned-fuck-youre-getting-old Arthritis.

Smell the sarcasm? Yes, I'm thankful that it's not a pinched nerve. But the diagnosis of arthritis pretty much means its something I have to just deal with and treat the symptoms. And the symptoms suck.

It means though that what's going on in my shoulders and arm isn't an issue caused by a pinched nerve (at least not by this doc's logic and expertise). Which again, is all kinds of good news. Except I still get to deal with the pain.

At least, though, He feels that through a round or two of Physical Therapy could alleviate the issue.

I'm all for that.

Oh...and apparently 'muscle relaxers' don't really relax your muscles. Nope. They're a sedative. Which explains quite a lot actually,

Alright.I need to get off here and back to work. My lunch hour is over and I feel the sedati-er, muscle relaxers starting to work.

(Better here than floating around my head...Thanks Blogsy)
at August 22, 2013