I'm not going to lie to you. I'm ridiculously bummed. More than I probably should be. It's like I lost...well...a friend. I know it sounds goofy, but it's true.

Let me back up though.

Something you may or may not know about me...I love to embrace technology. If there is a tool I can embrace and use, I will...to the hiit.

I write...a lot. I know, big shock, right? But I have journals all over the house...always have...in every house. Notebooks everywhere.

A few years back my wife at the time got me a Kindle Fire. I was in heaven. I used it for everything...taking notes, calendar, email, porn..er...internet browsing. You name it I used it. It was a great size (typical 7" tablet). Before that was a jailbroken Pandora Note (also a great little tablet for the dough).

One thing I thought I would really get in to using the tablet(s) for was notetaking and journaling. And I did. A lot.

Then I got a new job and wound up getting an iPad2. The game changed at that point. In addition to everything else I was using the tablet for, I got in to creating music with it. And the iPad supported bluetooth, so I could get a keyboard and really use the device as a total creative tool.

Fast forward a year..to three days ago. Friday night. Flying in from DC...I wound up leaving my iPad2 in the seat pocket in front of me.

Yes, I know it was a bonehead move. To be fair, my brain was pretty fried from a week of pulling cable at our new location in Queens, NY. Ever the obedient traveler, I stowed my electronic device for landing. What they should ALWAYS announce (in my humble opinion) after you land is something along the lines of the following, "And please remember, ladies and gentlemen, if you have anything that you stowed for landing, now would be a great time to grab it so you don't accidentally leave it on the plane."

Because that's exactly what happened. I'm home an hour after we land and go to pull my iPad out of the bag and it's not there. It's not anywhere in my house. I pull up the cloud. And it's at CMH. What followed in the next 24 hours included several calls to the airlines, a 2 hour trip back to the airport, filing a police report, and finally the realization that my iPad2 in the spiffy black Otterbox case with the UDC sticker was gone.

The last known location was somewhere on the way to the hangar. The plane has since been swept many times and hit at least 10 different destinations since my ass was uncomfortably parked in seat 5F. I have set it to erase all data as soon as it connects to the internet. And I've come to grips with the fact that it's gone for good. I picked up an iPad Mini Saturday evening. Because, well, I need one. I used the hell out of that iPad...for work...for creating...for play...for life. I went with the mini because for $40 more than the cost of replacing the iPad 2, I double the onboard storage to 32GB. Plus, I was already used to this form factor for 2 years before getting my iPad. It's a comfortable size for me. Not quite as unweildy as the 10" tablets.

It still feels like I got hit in the gut. I guess what I'm sad about the most is that someone didn't turn it in. Don't get me wrong, I'm not surprised, just disappointed. I know what kind of a tool that was in my life...if I found someone else's, I'd turn it in with no hesitation. To not do so, in my mind equates to theft. It's just not a cool situation. So...yeah....bummed about that. I like the mini so far. I've only really had it a day. It's going to probably take a bit of adjustment in respect to the handwriting and music apps, but otherwise, I think I'll be ok with it.

Sidebar...this plane is fucking tiny. The stewardess...er...flight attendant's honkey tonk badonkadonk has rubbed against my elbow like 5 times now. Any more and I think I'm going to have to buy her dinner.

Yeah. On a Sunday evening flight back to NY for another week of cable pulling. We got 35% done last week with only really 2 full days of pulling, so I feel good about our chances this week. We'll see though. Enough talk about the work week, it will be here soon enough.

So...something has hit me in the last several times I've flown. And it's the the spiel that EVERY single airling gives (I'm pretty sure the patter was pre-ordained by the FAA, because it's the same on every flight). But the safety lessons regarding oxygen really kind of apply to life.

In the event of a sudden loss of cabin pressure an oxygen mask will drop from an overhead compartment. Place the mask over your head...pull the strings on either side to ensure a secure fit.

Ok...pretty standard stuff so far. But here's the interesting bits...

If you are travelling with a small child or someone needing assistance with their mask, make sure you secure your mask first before helping them with theirs.

In otherwords, make sure you have your own shit together before attempting to help someone get their shit together.

And then...once the bag is secure, breathe normally. Even though the bag may not fully inflate, oxygen is still flowing.

So...basically...even though things may not look the way you expect them, it's still working the way its supposed to be working. Life is oxygen bag...it's still happening even though the bag isn't fully inflating. I don't know. I guess it made more sense in my head at the time...but shit happens. We all have those points in our lives when the bottom drops out. The cabin suddenly depressurizes. And if you look closely enough, there's a lifeline somewhere. The universe doesn't let us just dangle. There's always an oxygen mask. But you have to put it on yourself. If you are expecting someone to help you put on your mask, remember, they are going to have to put their own mask on first. Don't expect someone to help you if they don't have their own shit together. It's not fair to them...or you.

And when you have that mask on...just breathe. It may not seem possible. The natural reaction is to panic and take quick shallow breaths, but that only causes you to hyperventiliate. That's when life gets really gonzo.

I have to remind myself of that more often these days it seems. Life is actually good. Despite going through the divorce, it's still a good thing. I don't know how the ex feels, but I feel a sense of relief of not having to be or try to be someone that I can't be. I'm not going to turn this post in to some exposition about marriage...that's a post for another time.

Now I've got to get my shit ready for the landing.

Oh and the plan is on final descent, too. 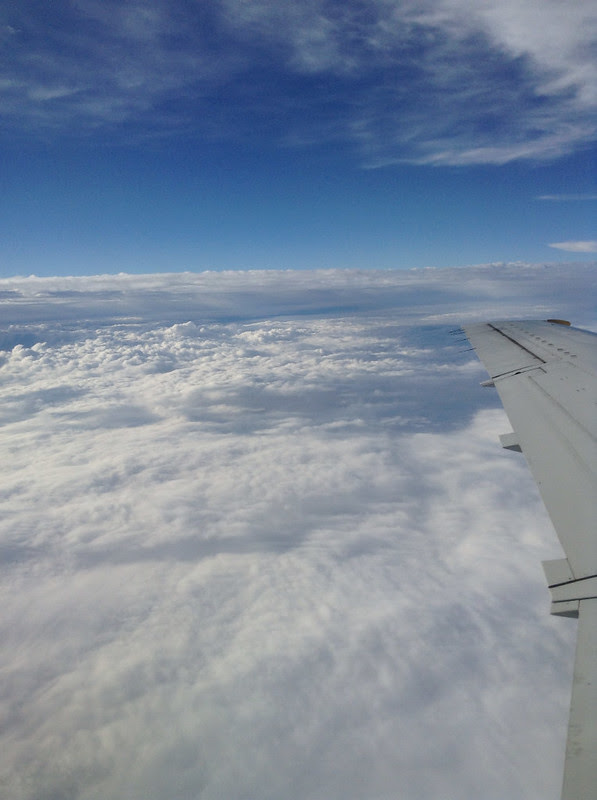 (Better here than floating around my head...Thanks Blogsy)