I'm in the middle of a post about how the 'we love each other/never forget' posts on the anniversary of certain major historical events always make me cringe just a little bit, but something else has caught my attention. 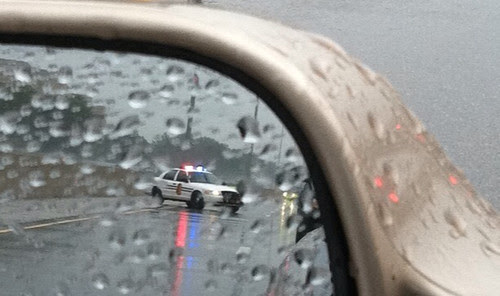 Driving in to work today. It's raining. Forget the fact that I sprint to my non-garaged car only to realize that a)there is no effective way to both get in the car AND get the soaking wet umbrella in the car without getting some of that rain on me and b)I've forgotten the lunch that I had so meticulously packed meaning that c)I had to go back in and repeat a). That's how the commute started.

The above pic shows what happened when I got to Sawmill. Sawmill Road is closer to my destination than my home. Once I hit Sawmill, it's usually 10-15 minutes to my work if traffic cooperates.

Traffic had no intention of cooperating. I got to the Sawmill road exit (just past the point where I could have actually exited had I heard an accurate traffic report in time. But that's the nature of an accident. And this one was a doozy. Apparently about 1/2 mile past the exit (in the direction I was going), there was a meeting of a dump truck and another vehicle. The news reported that it was a car.

I sat at my location, just past the Sawmill Road exit. For an hour. 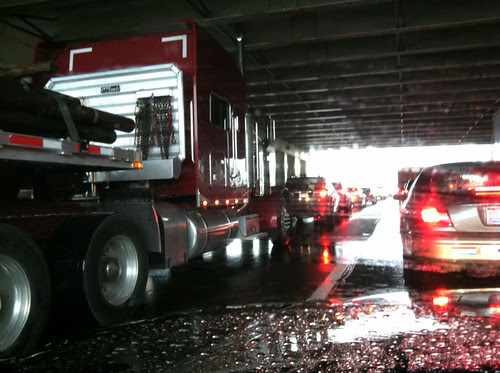 And another 10 minutes after that we slowly moved past the scene of the accident. I knew it would be bad because the news reports said that the highway was closed. That typically only happens when there is a need to LifeFlight someone or there is a fatality. I was hoping it would be cleared by the time we passed.

And the squads were cleared. There were bodies. But I saw the car...or whatever it was. I couldn't really tell you if it was a car or not. Because when I drive by, it was a jumbled mass of metal. I was stunned. It looked to me like a Hollywood effect where the super villain tosses the car around like it was tin foil and it winds up a crumpled mass of unrecognizable metal. And that's what this was. Only there was not a director yelling "Cut!" And this was not a movie.

This shit was real. And it got me thinking about how, yeah, my 90minute commute sucked. But somewhere was a family that would give anything for one more commute. It just hit me pretty hard, I guess.

Life is too fucking short. Seriously. And in an instant on a rain-soaked highway your life can change.

And I'm still processing it, I think. But for now I had to just get that out of my head.

(Better here than floating around my head...Thanks Blogsy)
at September 12, 2013