And A Big Ole WTF To You, Too, Tuesday

I woke up thinking today was gonna be a pretty kick ass day. I had a dream that I actually remembered. I attribute that to the fact that for the first time in months, I went to bed without any medicinal aids of any kind and decided to just sleep.

It was a rather vivid dream involving the photographer who shoots the Humans of New York Blog and 2 of his friends. I have, of course, never met him or his friends and I have no idea if my visual represensation of the three of them bears any similarity to persons living or non-, but it was a pretty cool dream nonetheless. I think I might have even been getting hit on by some of his female aquaintences, but I don't know if that's one of those details your brain fills in after you wake up or not.

Regardless...I was pretty happy. The drive to work was what it always is. Which is to say, not bad, but still a commute (which I someday hope to eliminate either by becoming independently wealthy or convincing my employer to relocate within walking distance to my house.Not sure of the likelihood or timeline of either of those, actually, but hey, a fella can dream, right?).

I did get to wear my Jayne hat today, though, so yay.

Work is cool. No complaints there. I've been working on my Queens expense reports most of the morning so...that's a tad bit mind numbing, but nothing major. As you may have guessed, it's lunch time for me. And that's where it just took a turn.

I chipped a tooth on my salad (this is is as of now unconfirmed. It's either a nasty piece of gristle, a fossilized cabbage stalk...or a piece of a tooth...not sure yet).

I go to open my cantaloupe, and slice my thumb on the plastic tub it's in. WAY worse than a paper cut.

Add to that texts back and forth regarding the dissolution and it makes for a not fun morning. Not that the texts were nasty or mean or even emotionally disturbing. It's actually all been surprisingly amicable. The irony being that there was a time when we worked together and did what we each needed to do to build our future together. Now we're working together so that we can live our future lives separately.

I can't really pinpoint a time when I knew it was over. OK, that's a lie...I think I can, but that's not really anybody's business but mine at this point. But I can say that I knew there were issues when I sensed that each of us stopped caring about making things better. When we became content to just deal with shit because it is what it is. At that point, when it no longer became something worth fighting for, it was over.

And that's pretty much why I try to limit communication as much as possible. When I talk to her...I think about shit too much. I tend to shoulder quite a bit of the blame for the decline and inevitable failure of the marriage...maybe more than my share. I guess (and here's a moment of 'the real Todd)...I guess I've done that my whole life. I always figured that on some level if something I was involved in failed that it was something I did (or didn't do) that caused it. I'm still working on letting go of that. I'm still working on realizing that the fabric of my life's patchwork quilt was chosen long before I stepped in to this body and that each of the different stiches are meant to teach and instruct me (and others) along this life's path.

I am more than the outcome of events.

Sometimes it's just hard for me to accept that shit just happens.

I'm working on it, though. At this point, it's still a work in progress. 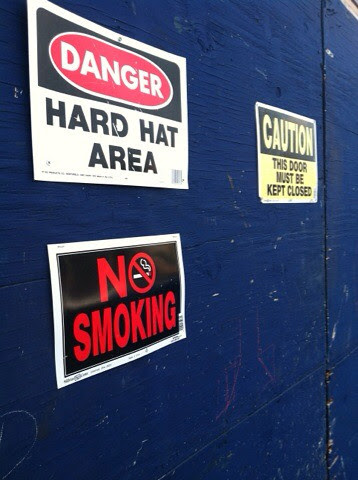 Peace to you and yours...I'm off to check on this tooth.

(Better here than floating around my head...Thanks Blogsy)
at October 08, 2013