I Should Be Sleeping

Sleeping. Or something.
I rolled back in to town last night. 10PM is about when I got in my door. Or somewhere thereabouts. And I was tired. Still am tired. Napped off and on all day. It happens after these out of town work things...my body says 'ok...you can stop pushing us to the limits now' and just kind of crashes. For some silly reason I thought I could avoid it this time. Not so lucky.

It's not a huge deal. Just makes the weekend seem busier. And the rush to get  back in the office on Monday a bit hastier. But I'll survive.

Still adapting to this whole cooking for one thing. Most recently in the area of Concerts.

Movies are fine. For some reason, I don't mind going to movies alone. Never have. I think it's because when the lights go out, no one knows who you came with or not. And there's not the kind of shared experience of say...a concert.  I'm not quite up to going to concerts alone yet. And it's too bad..I've missed a few good ones. Blue Man Group....Pretty Lights...Justin Timberlake.  Thing is...I have been to a concert or two by myself. Most notably Foo Fighters last year. I went. And it was no big deal.  The wife stayed home. It was fine.

I don't know why it's different now. Other than the whole shared experience thing. When I came home from Foo Fighters last year, I could gush at how awesome it was and she could (I thought) be happy I had fun and share in my joy. But there's no one right now at home to do that with. And then there's the whole pre-concert ritual. The excitement that builds. The drive to the venue...do you play their new album or not? It's all part of the shared experience.

And I don't know that I want to do that by myself just yet.

There are still aspects of this life change that I struggle with.  Sure...the last few years were just the barest shell, but there were good times. Times when we did go to concerts together. The rush of the performance. It was good.  And it's not that I expect that again. It's just that I'm...meh. I don't know. I guess I'm just not ready for solo concerts yet.

In 8 days I will be legally single again. A two time divorcee. I'm not sure that there will be a third marriage or not. I don't want to be Ross. I always pictured myself more of a mix of Chandler (with a little Phoebe thrown in).

I guess if there's someone that I'm really dying to see (like if Foo Fighters come back this way), I'll get tix and go. Not sure if I'd get two and try to find someone to pick up the other ticket or if I'd go solo. I guess that would depend on the act/venue blah blah blah.

Some aspects of this process flat out suck. But that's part of it, I suppose. Adapt to survive. 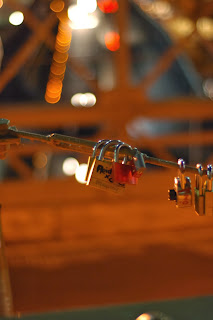 Have a good Sunday. I'm off to edit a few photos, run some errands to my favorite computer store, and possibly do some laundry.

Peace out my friends,