I'm Not A Policeman

OK...so I posted over on Facebook land this clip:

And I said in my status message that I had no idea why I posted it.

I know exactly why I  posted it. It's the look on the kid's face.There's all this chaos going on around her...and she stands her ground once. And almost stands it a second time until she succumbs to the norm and follows the pack.  But even then, there's this kind of quiet resignation about the way she says 'Alright...'

And I guess that's how I feel.

It makes sense that my friends and family tell me that I'm better off on the path that I'm traveling. I get that. I really do. I mean, I understand why you all say it.

But it doesn't fucking help. I know you think it does, but think it through for a second.

I had a person in my life that was my best friend...that I was planning on spending the rest of my life with. And then...that person slipped away (I'm sure I slipped away from her, too, if I was ever that person to her).  And I didn't or couldn't stop it by the time I figured out what was happening.

It's still a grieving process, my friends. There was this person in my life. And now they're not there.

And there is a very distinct void.

And I'm trying to trudge on. I know it's for the best, ok? But fuckitall...I'm not a policeman. I'm a princess.

You know how  quite a few of you knew shit was going south? Maybe even before I did. And you didn't say anything. You were there supporting me. You realized that I had to come to that conclusion on my own or it wouldn't work.

This is the same thing.

You have to let me come to the carpet with my toy in my own time.

I just have some shit to wade through first.

It's all good though. I know the direction I need to go. And I will  get there.

I am a bundle of raw, exposed emotions right now. And there are mornings....and evenings...and hours in between where it's taking every fucking ounce of energy I have to keep it the fuck together.

Angry? Fuck yeah. Sad? Damn straight. Deliriously giddy? Almost shamefully so. Denial? Yeah, it's there, too. Depressed? Probably--if you want get technical about it.   It's all part of the process.

And that's what it is, at this point. a process. I have to go through this to come out the other side. There's a better Todd on the other side. But you can't really just skip ahead.

Did you ever read one of those Choose Your Own Advenure books? You get to the end of a chapter...and you have a choice...and that takes you somewhere else. I will let you in on a couple of secrets in those books.


I'm living one of those books. Hell, we all are.

The question is which page do we turn to next? 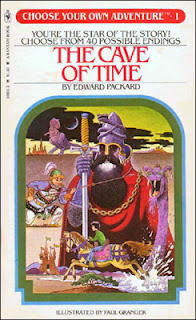