"...was some fucking pretzel nibs."

Now before I get too deep in to this, I should mention something. There is an unwritten rule in the land of Cooking For One. And that is this. The closer to the beginning of the post I drop the first f-bomb, the more fire-up/incredulous/exited/generally emotional about something I am.

Or rather, until that last paragraph there was an unwritten rule.

Fuck. There goes that one.

I want to start by mentioning that as soon as I knew I was going to be staying at a Best Western, I signed up for rewards points. So...I'm some kind of blip on their screen that says they have to try to remember my name and give me free bottles of water or something.  Remember that, we'll circle back around to that shortly.

I'm here in Brooklyn with 2 of my co-workers.

The trip was rather uneventful as far as my New York trips have gone. We got here on time. And our luggage got here the same time we did. And I have to be honest--I'm a little cheesed off by that. But Todd, how can you be pissed that your luggage  wasn't  lost?!?

Good question. I'll tell you why. Because I was prepared this time. I actually packed a separate carry on with a change of clothes, toiletries, my CPAP machine (which I did NOT expect to have to dig back out for TSA, dudes, really?!?)--in other words, I was prepared  for there to be some fustercluck with the luggage.

We took a brief detour to the Queens store. It was very close to the air port, we needed some tools, the new guy hadn't seen it yet, and it saved me a 3 hour round trip tomorrow. I didn't expect to go back, but eh...whatareyagonnado?

After 2 hours there, we headed up the BQE to the hotel.  I may or may not have mentioned something about this trip being uneventful and woe is me whatthefuck am I going to blog about.

So, we park and go inside to check in. The other guys check in first. We're all on the second floor. Groovy.

I mentioned that I was a Best Western rewards member. Suddenly he has to give me different room keys....and he gives me a bottle of water (But hands the other 2 guys a bottle, too. I think he just felt bad).

And I had something to blog about.

I would have been fine ending the post here. But it gets better.

By this time, it's nearly eleven PM and we're all knackered. The thought of waiting for food to be delivered is not sitting well.  That's ok though, because in this very fancy Hotel, there are

I stopped to get ice first. The ice bucket was a standard size ice bucket. The bag for the ice is the size of a young child's swim cap. OK...so...not much ice, check.

I head up to 4 for some snacks and was greeted with this. 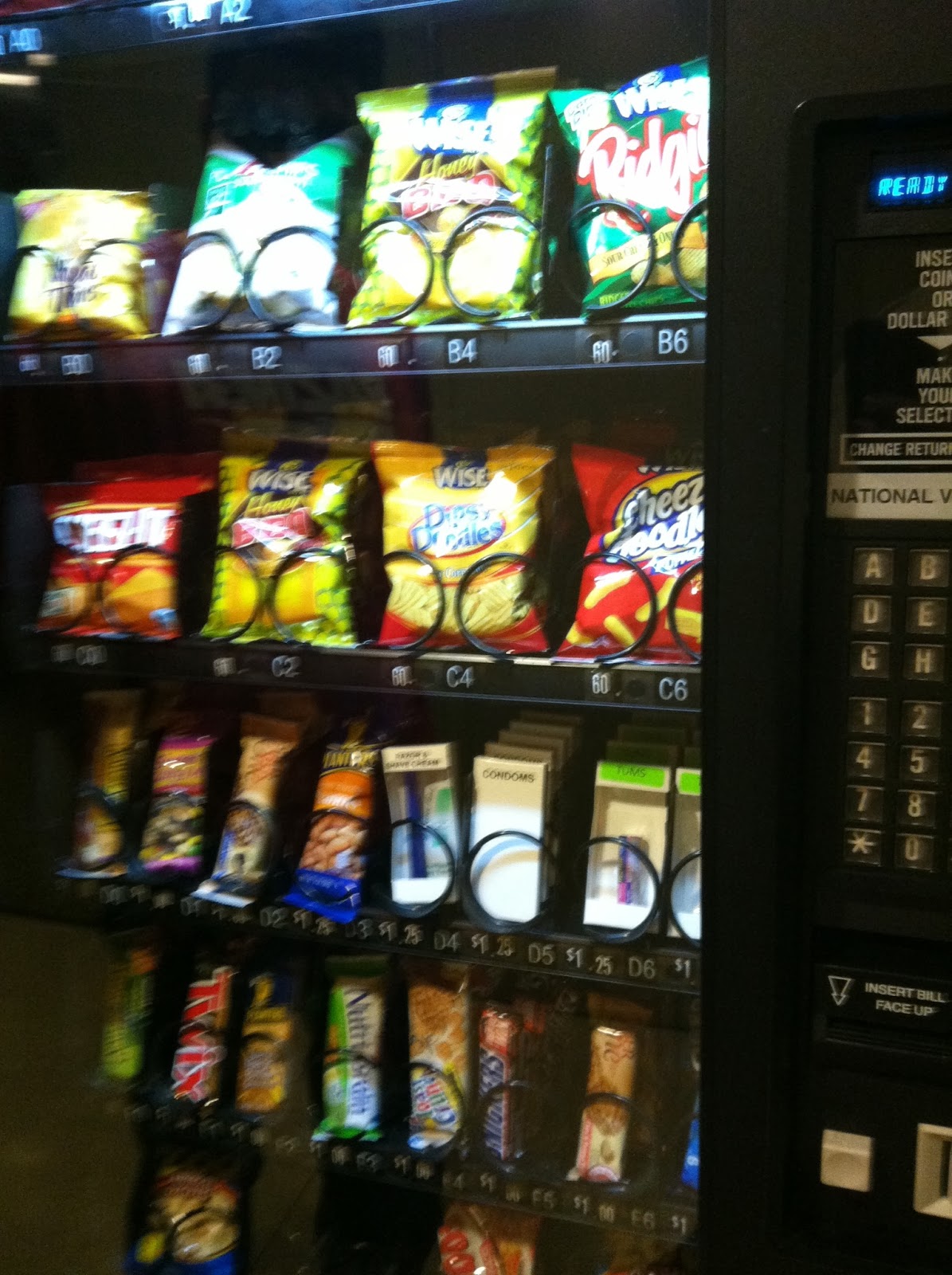 So I climb in the elevator and head to the lobby to get some ones. This time, I decide to check out the vending machine on 8. I figure it might have some cooler snacks.

Put my one in. Nothing. Wouldn't even pull the $1 in.  WTF?  Alright. No biggie. There's a soda machine on the 7th floor (that's a Pop Machine for some of you).  I thought that I could put a single in and hit the coin return to get quarters.

And it wouldn't give me my dollar back either.

So, a ginger-ale later (the bottled water was sold out), I'm heading down to the front desk to get quarters.

I let them in on the twilight zone bullshit that's been going on. They seemed unamused. I hope they don't get billed for that elevator by the number of stops it makes.

Anyway, back up to 8. Got the good stuff.  And finally made it back in to my room.

(and if you think the story ends there...noooooope).

I set the stuff on the desk, and kick off my shoes. I pull out the desk chair and go to sit down, and fall about  6 inches further than I expect to.

I try to raise the chair. And it's broken.  Stuck on the lowest setting.

Speaking of psycho vending machines. Not sure if you caught this or not... 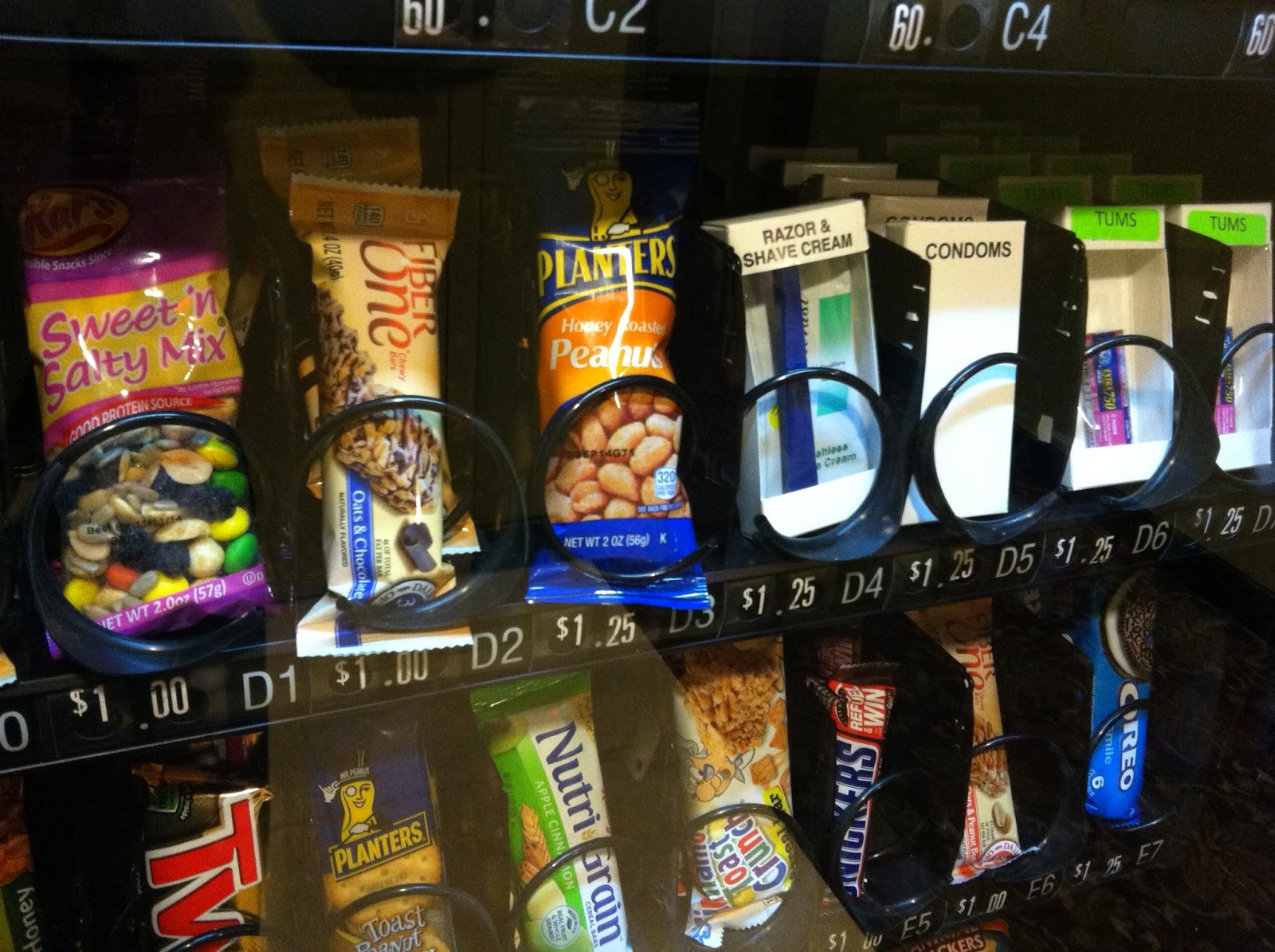 Condoms. In the vending machine. Seriously? I told a friend about this, to which they said "THAT'S Safe--how many times have you gotten expired snacks from the vending machine?!"  Good point. It does, however, reinforce my suspicion that it was a Russian hooker in the elevator.


That will teach me to bitch about not having things to blog about. And now I need to hook up my CPAP and get some sleep. I predict a busy day tomorrow.