February 25, 2014
This thought hit me as I got out of the shower this morning and I just had to write it down: 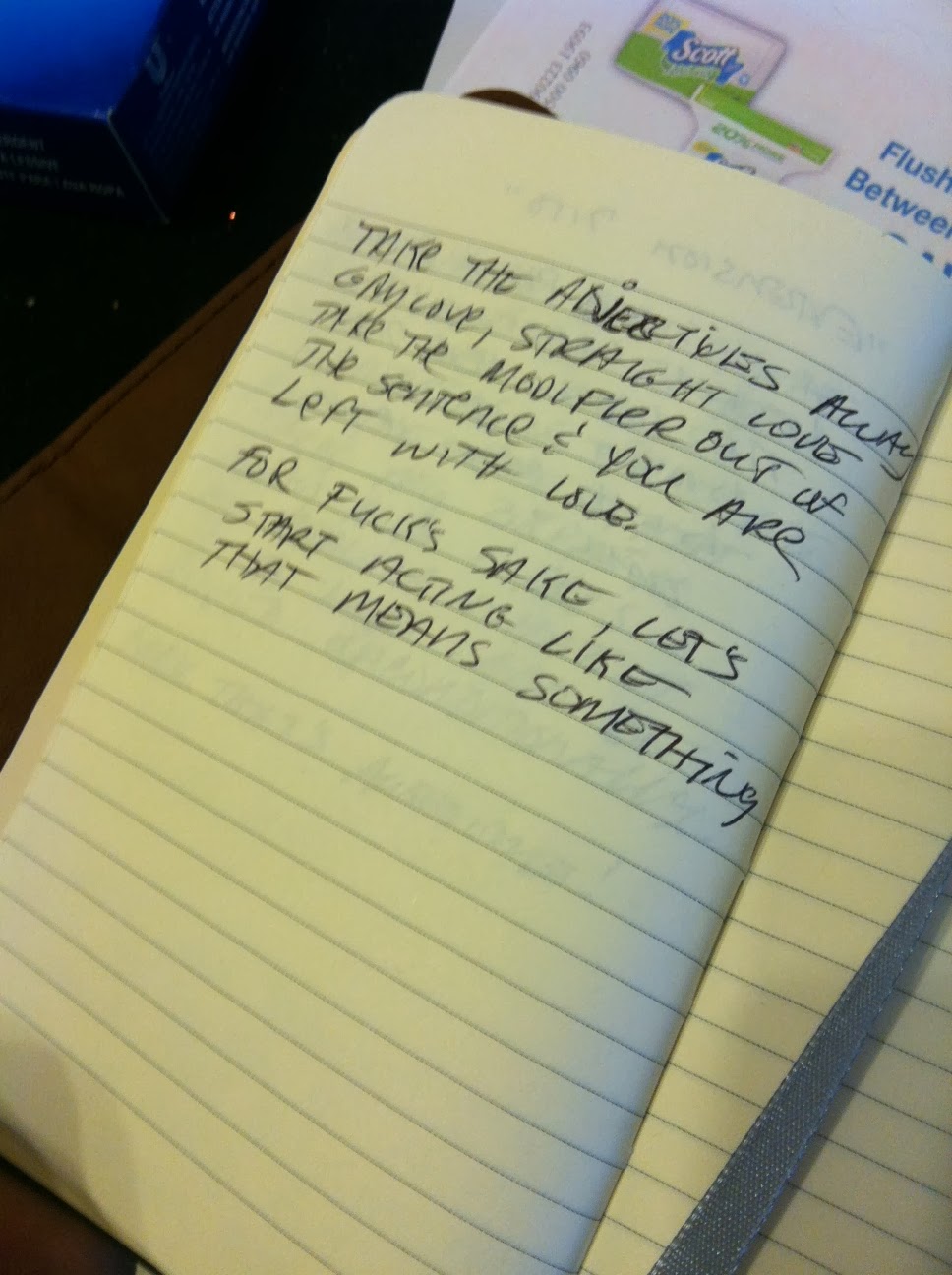 If you can't read it, it says:

"Take the adjectives away. Gay love. Straight love. Take the modifier out of the sentence and you are left with love.

For fuck's sake let's start acting like that means something."

That whole thing came to me when I learned of Arizona state legislature introducing the ability for anyone to refuse to serve or conduct business with someone that was gay because it went against their strong religious beliefs.

So...in other words, we have not only struck down the wall between separation of church and state but we have in some way legislated a perceived morality.

Let me see if I understand this...You can't call someone a 'faggot' on the street but you can refuse to do business with them. In other words, hate crimes are illegal, but segregation is OK. Because that's really what we're dealing with here, isn't it?  Is it any different than saying 'I won't serve you because you're black. Or Hispanic?' No. I'm sure some religion doctrine somewhere can be pulled up to support this.

And how far does this go? A bank itself may be ok with taking a homosexual's money, but if it's strongly against a particular bank teller's religious belief, who wins? Does she ask the gay man to go to the next line?  Can she be reprimanded for not doing her job?

This is not just a slippery slope. It's a motherfucking avalanche of legislated hate and discrimination. I think the governor of Arizona needs to veto this bill in a heartbeat.

I can't wrap my head around this hatred of the LGBT community. Is it because you can't look at someone and instantly tell they're gay? Racism and bigotry were so much simpler when we could just base it on the color of someone's skin and shape of their eyes. Jeesh...you mean I have to get to know someone first, have them open up and share something that they've been shamed for their whole life and trust me with that secret before I arbitrarily hate and condone them for being different?? Jeesh. That's a fuck ton of work, man!!

Using the modifiers is so unnecessary, too. I mean I could  say that I have gay friends and gay relatives. But what does that possibly add to the story? Nothing. It in no way gives you any insight in to how amazing those people are and how blessed I am to have them in my life. Nothing about calling them gay gives you any indication as to how much my friends and family mean to me.

Because, to me it doesn't fucking matter. It's not what I love about them. Don't get me wrong, I love their heart and courage and willingness to fight for rights in a society that should accept them because of who they are, not what their relational-orientation is. And it saddens me that there's even a 'fight' about this at all.

I can't wrap my head around a society that can turn on someone in the drop of a hat...forget years of friendship...over two words. I mean, for crapssakes. I feel sad for our race...the humans...when someone has to declare their orientation and in doing so brace themselves for the shit storm that will follow.  If I were gay, there is a strong chance I would never say anything. Why? Because 1) It's none of your business....2) It doesn't change who I am....and 3) It's none of your fucking business.

Do I have to defend my sexual orientation now? No. Does anyone? No. Why? Because there is nothing wrong with it.  Any doctrine that in anyway seeks to exclude a person or group of persons for simply being different from the authors can in no way be divinely inspired, in my humble opinion.

It goes back to love.

Think about that. Just for a second. Love.