I'm coming to the conclusion that I'm a relatively simple person. It doesn't take much to make me happy. Honestly. I don't need a house full of tech (although I enjoy it, I certainly don't need it).

And things that take me back to my childhood are, as of late, tugging at me. A month or so ago I picked up a Nintendo 2DS little handheld game. Not because I want to spend hours in front of the TV, but because I may want to pick it up and play a little Super Mario (which I'm finding I still suck at) or Tetris for a 20 minutes.

Next weekend I'm going up to Put In Bay with friends. I've never been. I hear it's a blast. I hear their stories from years past and the fun they've had. And I'm ready to step out of my comfort zone and have that kind of fun.

To that end, I decided that I didn't want to look at the whole trip through the view finder. I decided to pick up an instant camera.

You heard me. An Instant Camera.

Believe it or not, Polaroid still makes an instant camera. I looked at it and decided it was shit. I didn't like the looks of it. I didn't like the fact that it looked like a toy.  It would have been perfect, though. I'm sure I still have my Polaroid Sun camera over at my parents house somewhere. Talk about a trip back in time. I think I first got that back in 7th or 8th grade. And it was a big deal because you didn't always have film. And you had to save the 10 shots that were in the cartridge for the really important things.

It it was great because you didn't have to send the film in to get developed. This was long before the days of Cord Camera's 55min Developing and of course digital cameras. Cell Phones were a few years away and they were wired to the car or in big carry-on size bags.

So...I did some more digging and found that Fuji had exactly what I wanted. I had been looking at their X10 as a point and shoot to end all point and shoots for me. I'm honestly considering paring my photog gear way back and just shooting things for me. But that's a post for another time.

Erm..yeah. Back to to the Fuji. I did some more digging and found what I was looking for both aesthetically and functionally. The camera had that retro vibe that I'd been wanting. And it did some really cool shit for an instant camera (timer, double exposure, macro mode, kid/action mode, Bulb mode (for up to 10 seconds))....in short, it was perfect.

I got on to Amazon and ordered it (MicroCenter didn't carry this model) and got the Fujifilm Instax Mini 90 Neo Classic. Yeah, it's a mouthful to say, but it's oh-so-choice! 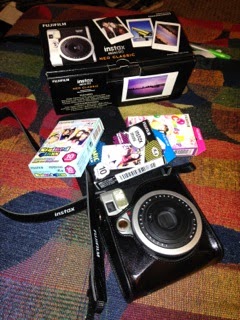 I'll dive in to more of a 'this is what I love don't love about the camera' kind of post later. For now I want to shift back to that whole Instant Camera kind of thing.

And that got me thinking. It's not the camera that's instant. It's the print. It's an Instant Camera because it develops the photograph right after you shoot it. Which is funny, actually. Because even that itself is not 'instant.' You still have to wait for the chemicals to do their little dance on the photo paper.

I found myself giddy with anticipation at the first shot. In an instant (pun completely intended), it all came back to me. The loading of the film cartridge. The moment when the camera ejects the blank cartridge cover letting you know 2 things: The camera is ready to go..and DON'T open the back of the camera up until you go through all 10 shots in the cartridge.

You know what was even cooler as I went around with this yesterday (both at work and at play Uptown last night)? Every single person who saw a picture taken had that same awesome smile when the picture came out of the camera. Crowding around as the print developed. Invariably someone would pick it up and start shaking it like we all did. It was great!! I could tell that it not only took me back, but everyone who was exposed to it (again pun intended) had that same look of joy.  And THAT made it worth it to me. Even more than I already thought it was.

Here's the shot of the first shot: 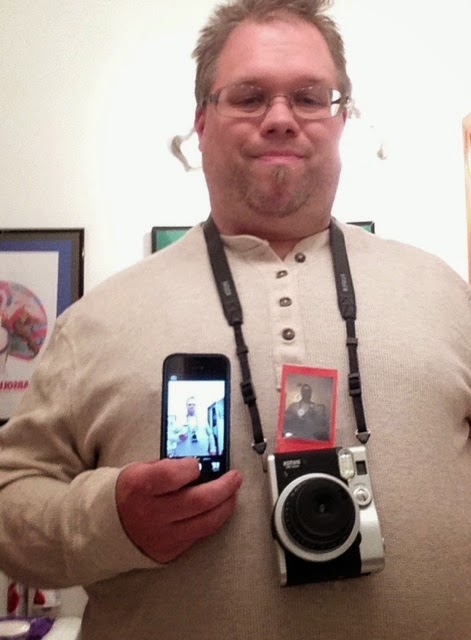 If you look, on the camera is a print. Yes....this is the first (and likely ONLY selfie) that I will take with this camera. I like the anachronistic undertones of this shot. I call it 'Digital Irony.' At least I do now. I just made that shit up.

Here's what I don't plan on doing.  I don't plan on taking a digital shot of every instant photo I shoot. That's just too much work and SO not the point. I have taken some pix of the shots I took yesterday, but more for my review of the camera and to show my peeps on Facebook how fun this thing is. The point is to not take pix of pix. The point is to live in the moment...take the shot....see what develops and move on.

And really--isn't that like life? Live in the moment...take the shot...see what develops....and move on until the next time you feel like taking the shot.