If you're tired of me gushing about the joys of my instant camera, you might want to skip ahead. I'm not sure where this post is going (to be fair, I never know where they're going).

It's funny...I mean being happy is funny. Seriously. It's like being in this head space where I'm smiling for no reason--I mean no discernible reason. I know why I'm smiling, but people around me might not now. And shit is bothering me a lot less.

The camera. I'm loving the camera. I have a crap ton of film for it and expect that I'll shoot quite a bit of it this weekend at Put-In-Bay. And I have 7 (6?) photo albums that each hold 80 pictures. It's going to take years to fill that. I say that for one reason and one reason only. I've got one almost half full now, but I have given away probably as many pix as I've snapped. THAT'S the part that makes me giddy. Taking the pic and giving it to someone. It's like 'here-you take this little card of joy and go smile for a while.'  And what I'm finding (not true--I've always known) is that when you give someone else a reason to smile (especially when they aren't expecting it)--it instantly increases your (my) personal joy and happiness levels. That's happening.

I want to do an SNL-esque sketch. It centers around traffic (so it will be hard to shoot on my own--not impossible, but tough). It centers around four cars pulling up to a light. And they're all listening to the same song...but none of them know it. And they all start playing their respective air jam instruments. And maybe you don't hear the song until the very end..or only hear snippets of it.

Or maybe it could be an iPod commercial. Come up with some app called GroupJam or some shit like that....where you could have 4 or 5 people getting ready to cross the street and the same song comes on all of their iPods and bam, the air band frivolity commences.  Not sure how feasible that is. And I'm not sure how they'd pull that off in a commercial (if they haven't already) without it seeming like some kind of weird Apple mind control thing.

Yeah. This is the kind of stuff that floats around in my brain. Welcome to it, my friends. If you don't know by now (or based on the url of this blog), it used to be call Random Meanderings (which pretty much describes my brain nearly every waking moment). It was later called High Plains Thrifter (I would go to thrift stores and take pix of things that amused me. Management got pissy--I stopped, but if you go back far enough the posts are still here).

Read an interview with Stephen King last night before I went to bed. That probably accounts for the dream conversation I had with him about writing. I don't remember the specifics, but the gist was, "Dude--get off your ass and get to writing." And then we both laughed, because have you ever tried to write for any length of time standing up? It's not as much fun as you think. So, when people tell me to get off my ass and start working on my dreams I remind them that to do so, I actually have to be on my ass. It makes me giggle.

Giggle. Such a funny word. Hard to misuse that word. But I've been doing a lot of it lately.

I posted something to Facebook today (yeah, I know...still doing that...apparently I'm weaning myself off slowly)...but I said "Best-selling author, Todd Skaggs"  And it made me smile. In reality it will be "Best Selling Author, A.T. Skaggs" but not many people (like maybe 5) in Facebookistan actually know me as A.T.  But that will be the name I publish under. You've been warned.

I was over in the old neighborhood last night helping former neighbors with their computer. And I have to say that after a year, I fully feel like a stranger in that area. I don't really have any feel for the area anymore. I mean I still enjoy hanging with the friends who still live over there, but I don't like going in that neighborhood anymore. It's not who I am anymore. It would be like me driving around the apartment that the first wife and I lived in--there's just nothing there. I guess the good thing is, that there's no impending sense of dread that I'll run in to the ex-wife anymore. I just don't care either way at this point. My last tie to her was actually paid off this week and now we are just two separate people living our separate lives. Moving on feels f**king fantastic, if I'm being honest.

I'm sitting here at lunch and I apparently was snapped by a co-working. A budding shutterbug with a good eye. The pic just made me smile.

I like smiling. I swear happiness, true happiness is the drug. And people who don't have it look for anything to be able to replace that feeling. 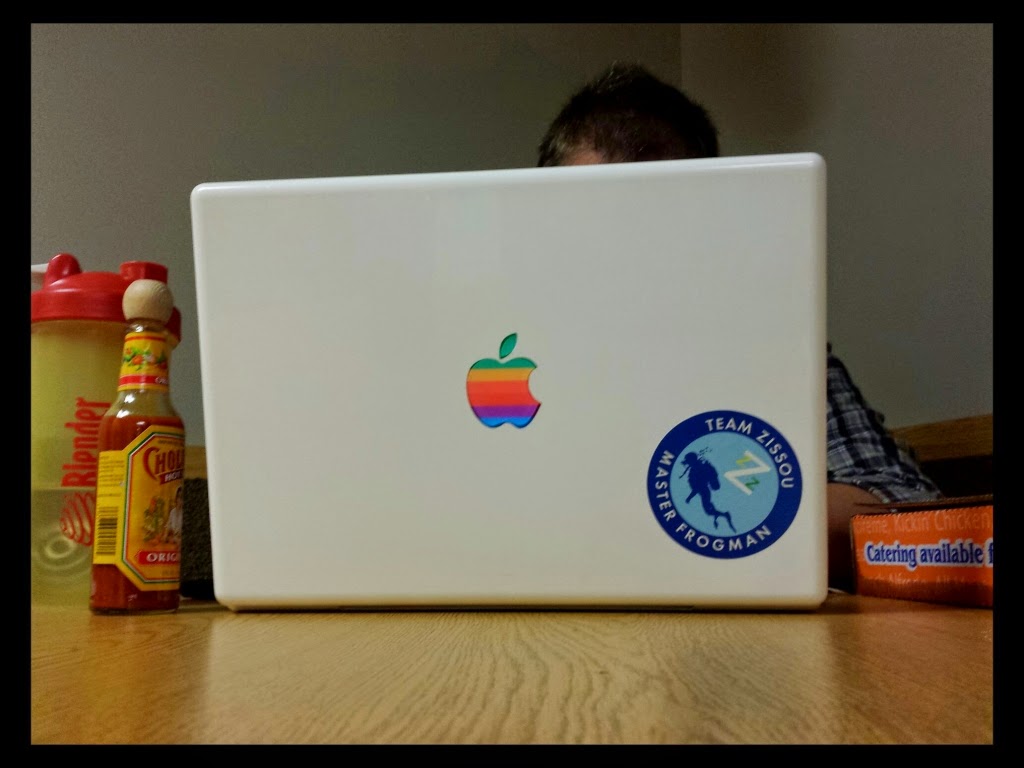 And the Team Zissou makes me even more smiley.

Life is good my friends. More specifically, I'm good with my life.

And that's certainly a reason to skip. You know you can't skip angry. Try it. Try to be pissed off or angry and then skip. There is something about skipping that makes the endorphins contort your face in to a weird smile. Sometimes it's good to skip ahead :-)