Change In The Weather

According to my phone, it's going to start raining in about 30 minutes. Or there's at least a 70% chance that it will. Which...these days pretty much means it will.

I don't quite smell the rain in the air, but the wind is shifting. My guess is that it will be closer to 11:30 or midnight. And that's fine by me. I'm sitting in my big boy chair on what passes for my patio. It's not really covered. But I'm outside. In the air. And that feeling....that wonderful feeling of openness is really what it's all about to me. It reminds me of being on the front porch down at the farm and just letting my mind go where it wanted to while my fingers kept up.

All I have to say is...thank goodness for typing class in High School. Since I was about 18, I've been able to touch type. And I haven't looked back. And I have to say that's one thing I'm thankful for. My fingers can, for the most part, keep up with the thoughts that I want to put down.

My sleep was interrupted last night. 2nd night in a row. It was about 3:30 both times. There is some history to that time. The Russians call it the hour of the wolf. And, if I'm not mistake, it's also considered the witching hour-that hour when the film between our world and the universe at large is at it thinnest.

I talk about going to my Dreamland workshop often. Or at least I used to on Facebook. Sometimes, I wonder what it is I bring back. This morning, all day, I couldn't shake the thought that somewhere, the stories I write--the ones I can see the most clearly in my mind as I'm watching a movie, are actually coming to pass somewhere in the universe. Or one of the universes, anyway.

I think part of it is coming from watching Alphas. I'd consider it a B or C level series from SyFy. Pretty good, basically as friend called it 'X-Men Lite.' But it focuses on people who have evolved past what is considered 'normal' for humans.

Normal. That thought always cracked me up.

I've never been normal. At least not in my mind. There has always been an aspect of me that has always caused people to wonder about me...if even for just a little bit. And that's OK. Truly it is.

I don't know how to describe it. But it feels like...I don't know...like I'm just kind of on loan here--if that makes any sense (I'm not sure it makes any sense to me). What I mean is...that even though I'm here...playing by the 'rules' of this world, I'm not really here.

It's not that I think I'm better than other people. In fact...I think it's quite the opposite. I think that everyone is better than they actually realize. That they are so much more than they can even see.

There are times when I am overwhelmed by the sheer beauty of people.

And then there's the morning commute.

And that's how I know I haven't transcended yet. Sometimes I can live in the now. Not for very long. But for pockets of time...short pockets of time, I can be so flooded by every sense--all of them experiencing the moment right now that time stops.

Only it doesn't stop. It just stops looking like time. It's like if you roll up a piece of paper and draw a straight line around the roll...and that's your life. Like the ring of a tree. And you make a ring for each person in your life. Right next to yours.  And then you open up that paper and lay it flat. Which mark is yours? Which mark is someone else's? And what happened to the straight lines?  In my mind, that's what time is actually like.

Even that is a simplistic version of it. For some reason, my thoughts of it aren't matching up with the words just yet. Maybe it's not time yet.

When it is, I know the words will be there.

It's funny how things bloom when and where you least expect them. 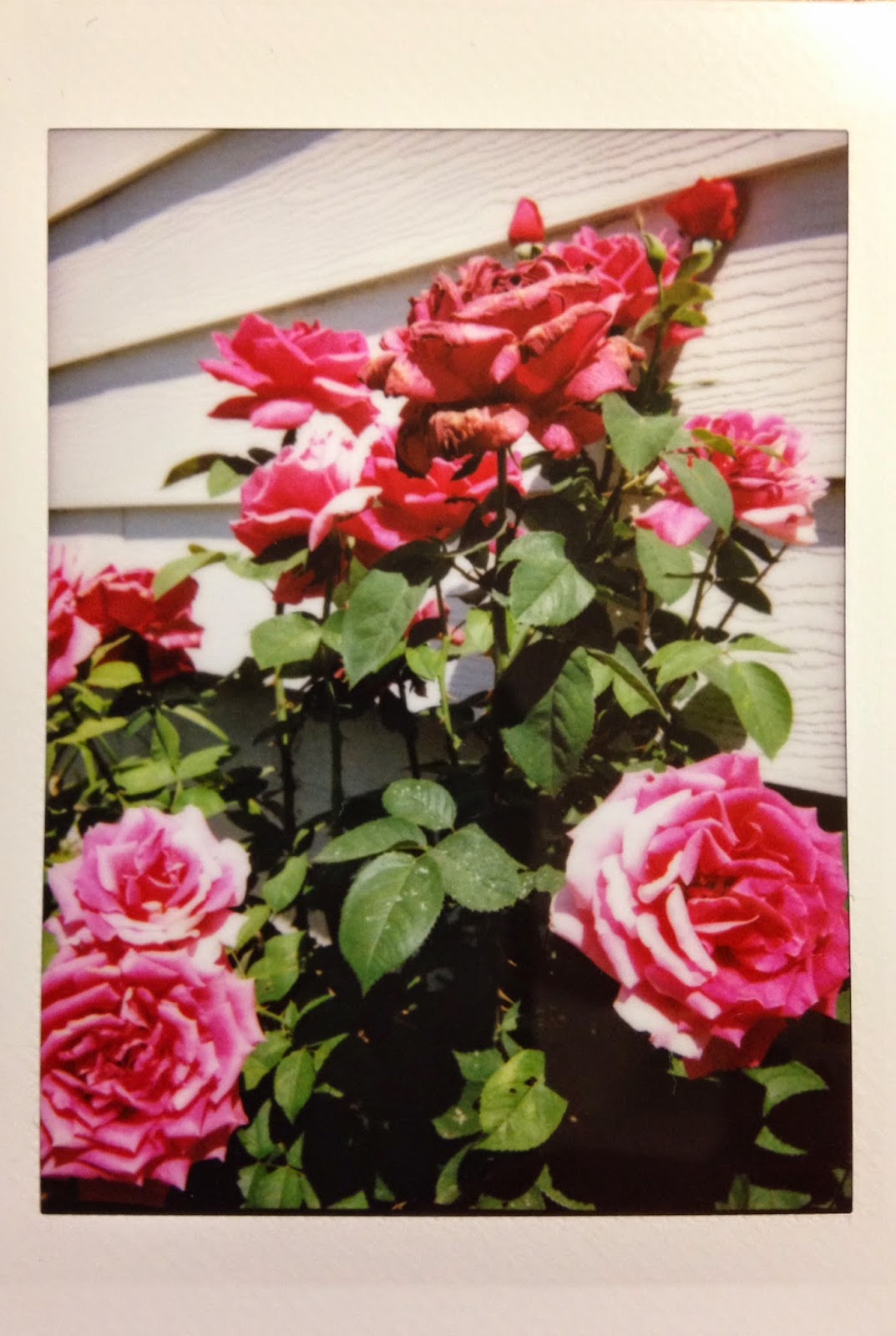 I mean...one day you could be taking out the trash and boom...there's a rose bush.

The rain is early.

I felt a drop.

Time to go in. It's unfortunate. Writing outside felt freer. More of a conduit with the elements, I suppose. I don't know that I want to take my laptop everywhere, but I can definitely see taking the iPad with keyboard. It's not that I'm tied to tech. I just type faster than I write with pen and paper. But trust me...there are times I still do so, if only to slow down a bit.

You know..that whole living in the moment thing.

I 'm feeling particularly rambly tonight. I'm not sure what it is, other than the sense of urgency is gnawing at me a bit. Not quite on the surface, but just below. It's that feeling that too many people are living lives they were never meant to live, and you have to be an example to them that it's not too late to follow your dream.

At least that's what it would be, if there were actually words to quantify the feeling.

Perhaps, too, I'm still buzzed from the PVC cement that maintenance used earlier to fix the plumbing from the washers downstairs.

No, that's not a question. Who does know. The question is who is who?

And with that, I draw this to a close. I feel that continue in the current vein will give the admissions council all the cause they need to put me in the rubber room with crayons and nothing sharp.

What? Like I'm the only one who has ever wondered if I'm crazy.

You ever look around your life and think that maybe something horrible happened and you've been living in a coma? Like your whole life is a construct created by your brain to keep you alive?

I know that it's been done in a movie. Or at least I feel that it has. Or if it hasn't, it should be.

Which begs the question...do people come up with those plots because they are a reflection of what's really happening or because somewhere down the road, we are being primed for that inevitable future.

And if anyone's keeping track..I prefer the old-school Crayola's. With Perriwinkle and Burnt Sienna, thank you very much.

See you in Dreamland. I'll be the one with the kick ass coloring books!