I have to be honest...I'm hard pressed to tell you what day it is right now. I just woke up.

I've been working nights this week. And the way nights work at our company is that you come in at about 8 in the evening and you're there until 830 the following morning. The Night Operator is responsible for doing all of the nightly processing that crunches the numbers for the day's sales and gets all of the reporting generated for the company. So, even though you've crossed midnight and you're technically in to the next day, you are still of that mindset that it's the same day that you came in.

You come in on Sunday at 830 PM....and when you leave to go home Monday morning, your Sunday just ended.

It's nothing revolutionary. It's how most nightly processing at most 24/7 shops goes.

I've been doing it this week since Sunday night and I've got 3 more nights to go.

Here's the funny thing. I can tell that by the end of this 6 day stint, my body will be adjusted to it. And that's messing with my head at the moment.

I have to stop now and think which day it is. It's nutty.   Tonight I don't go in until later. It's actually a split night shift. The details of why we're doing it that way would bore you and quite frankly don't make for a very good story.

Point is...in my head it's like 'going in to work at noon.'  That's the weird thing. It's like my entire world just shifted by 12 hours. The numbers on the clock of when I go to sleep, when I wake up, when I got to work...eat breakfast, lunch, and dinner are the same. The only thing that has shifted is the AM vs. PM.

I have a quarter quilt that someone in my family made (likely meant to be the runner at the foot of the bed) that fits over my bedroom window quite nicely and turns day in to night. So that's pretty cool.

I dunno. It's weird.

Could I do it forever? No. I don't have the temperament to do the position full time.  I feel way too fucking disconnected with the rest of the world. My friends and family still text. Only now I see those messages when I wake up in the 'morning' (their evening). So I have less conversations with people than I used to.

I mean, I say that I couldn't do it. But I suppose if I had to, I could. It's funny what we adapt to.

Speaking of adapt. I got a text from my daughter today. Apparently she ran in to my ex when she was out and about with her cousin. And coincidentally I saw some update on LinkedIn from the ex.

Both of which made me chuckle in the 'I really don't give two shits' kind of way. I then removed the ex from LinkedIn. I can't really see any point in my future where either of us is going to be asking the other for a professional reference. "Why yes, he is a whiz at Customer Support, but is an asshat when it comes to rinsing his dishes off and putting them in the dishwasher. And don't even get me started about the yard work..."  Yeah. Not gonna happen.

Linked in is trying so hard to be Facebook, it's ridiculous. I'm waiting for Facebook to buy them out and rebrand it to Facebook Business Edition.  Wait for it. It will happen.

I'm rambling because, well, it's the first time in the last week or so that I've felt somewhat motivated enough to dust off the cerebral cobwebs. I apologize to the 4 of you that normally read this for not being here. But as I think you've gathered, my life's been on its ear for the last week or so.

The book is kind of on hold right now too. I expect to pick it back up this weekend when I'm on a somewhat normal schedule again. Don't worry--it's not going to go away. I've already seen many unwritten chapters of it play out in the movie in my mind. And it's kept my interest. Which is a good thing. If it doesn't keep my interest as I'm watching it play out, there's no reason to write it. After all, why would I write a book I didn't even want to read?

OK. I know I have more to say, but I need to take a break and eat some breakfast and listen to the thunderstorm.  When I get a wrap around porch, this will be the kind of weather that I sit on the porch in and strum my guitar as the storm rages on.

Speaking of guitars, I finally stepped in to my dream.

Back when I was a freshman in college, I used to go to the little music store in Greencastle, Indiana. I don't remember its name or even if it is still there. But they had a guitar I would play every time. It was an Alvarez Yairi. And it was beautiful. The tone was amazing. To me, the Alvarez guitars always just had that pure warm tone that a well-crafted acoustic is supposed to have. It just sounds right...you know what I mean? I vowed, 25 years ago, that I would one day own my very own Alvarez Yairi. It became my dream acoustic (still is).

Things fell in to place recently and I was in the position to get a new acoustic. The Ibanez Acoustic/Electric I had just wasn't cutting it (sounded way too tinny).

I was about to get a Fender from my local music shop and on a whim headed over to Guitar Center. They also had the Fender for about 30% less. And they took my Ibanez in for trade.  As I was about to pull the trigger, I looked up. And saw it.

An Alvarez.  It was $50 more than the Fender, but with my trade in, that wasn't an issue. And it was acoustic-electric.  I asked the sales dude to get it down for me so I could play it. I looked around the room and it was the only Alvarez they had.

From the first strum, I was hooked. The pickups were secondary to me...if it sounded like shit plugged in, I didn't care (I could mic it if nothing else). But when I plugged it in, it was just that next level of awesomeness. 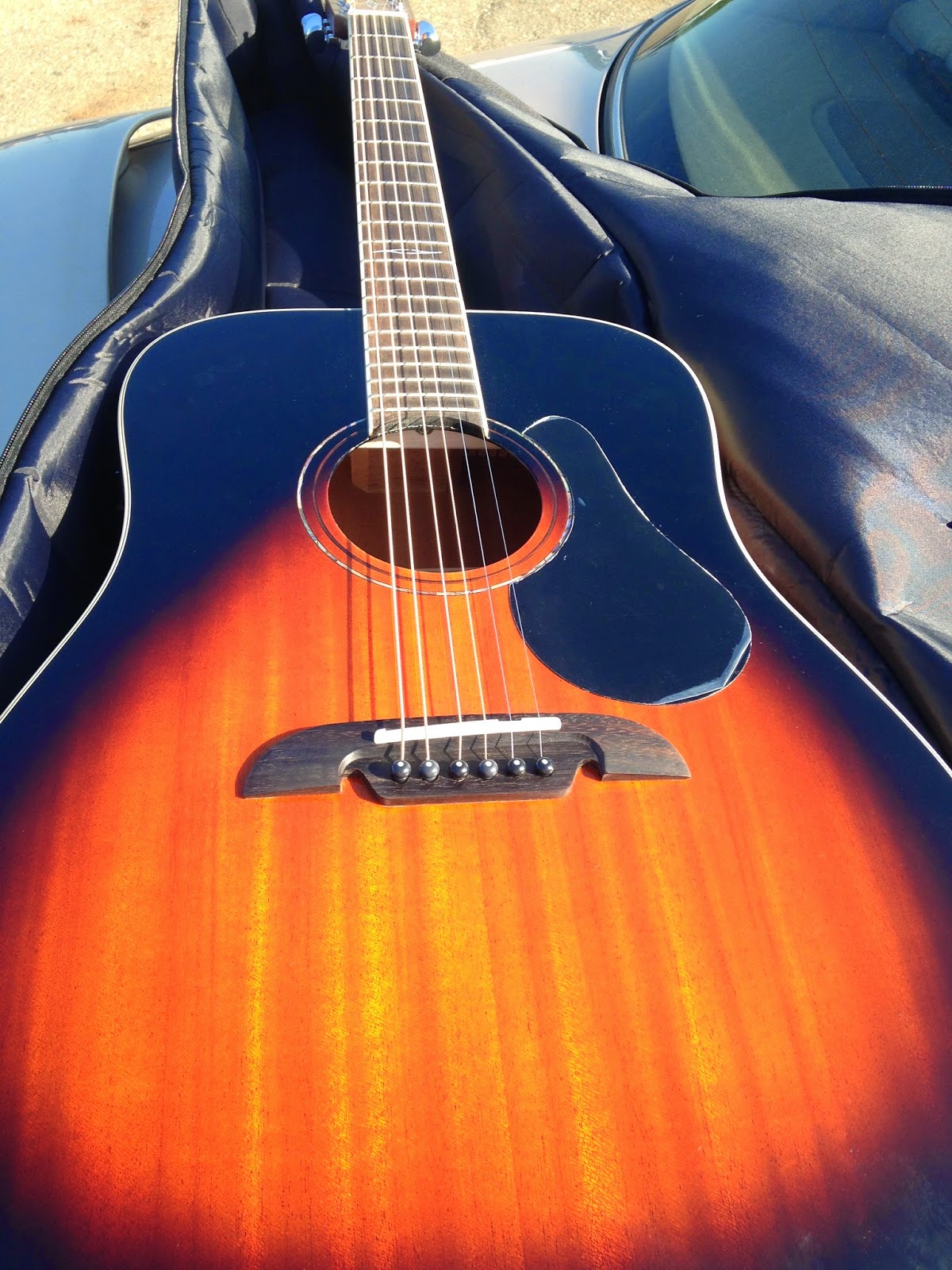 Forty-five minutes later, I was the proud owner of a new Alvarez Artist Series Dreadnought.  To be fair, it's not my Yairi (which I will still one day own), but it's beautiful and has an incredible sound. It's just a joy to play. I know that sounds weird, but it really is a dream to play. 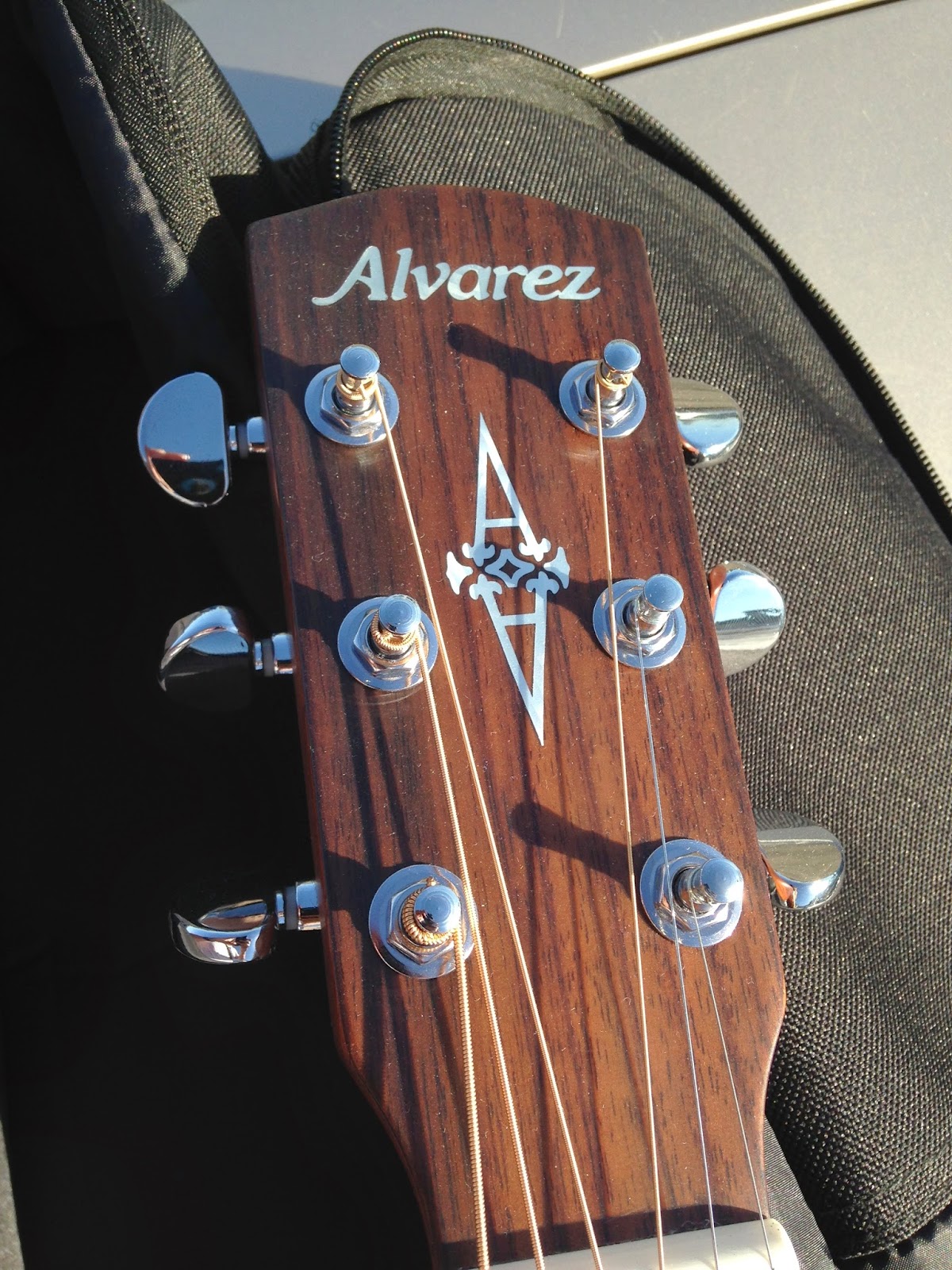 And it's right at home with the other guitars (I mean, you want them to fit in when you bring them home, right?). 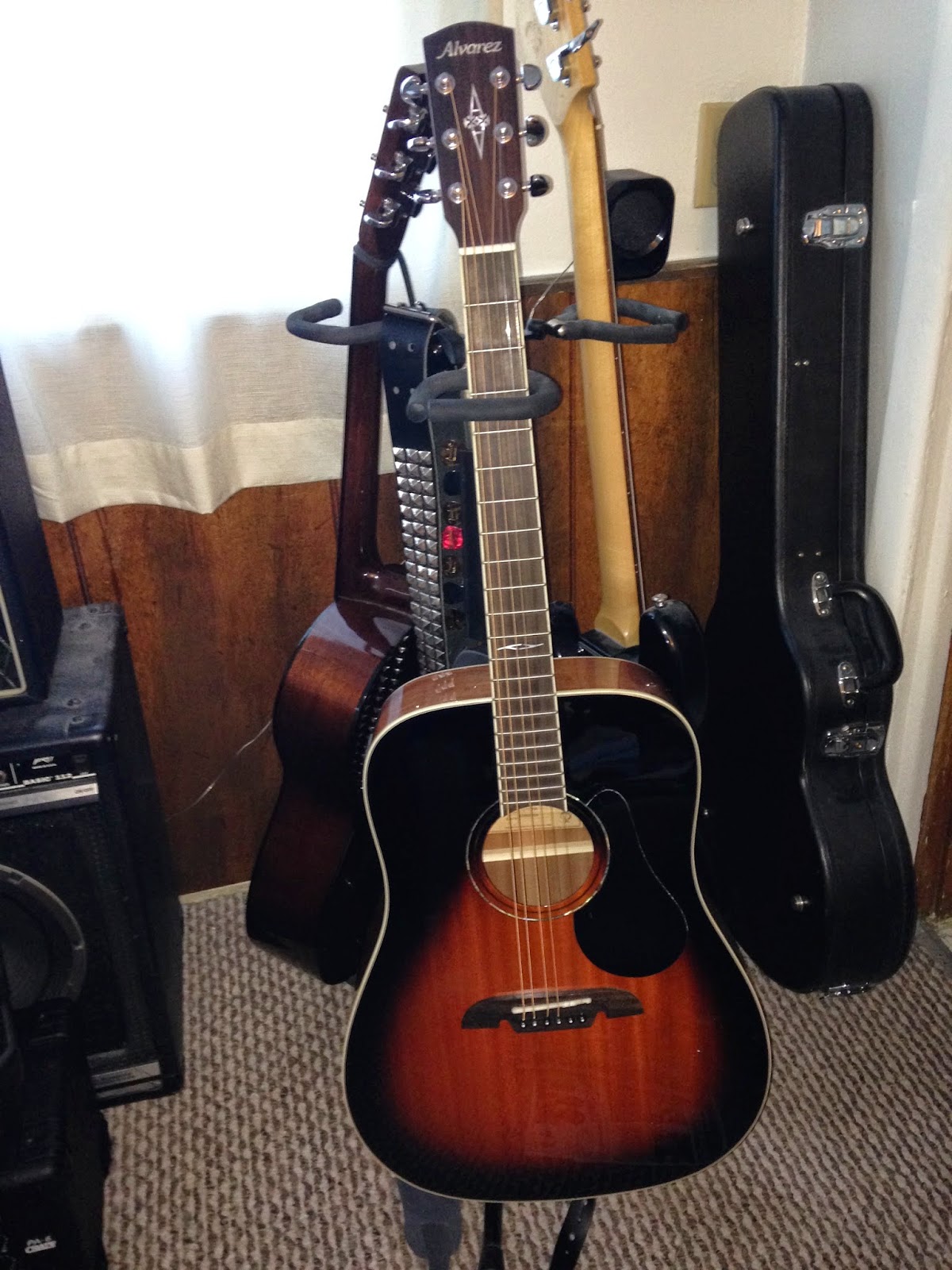 Yeah...I'm a sucker for the tobacco sunburst finish--it's my favorite finish on a guitar. All of my guitars (with the exception of the bass) have that finish.

Anyway, off to breakfast.

Have an awesomesauce day...er..night...er..whatever my friends!!!

Sorry that work had you on nights. I'm sure that did start geting a little surreal or dream-like or something.

And a big AWESOME!!!! on the acoustic guitar. Dreadnoughts are awesome, as is the sunburst finish! Good score Todd!!!

Hey...whats the big deal dropping off the face of the earth without warning me?? Last I checked we are friends...email me so I can give u my new # to text. Miss u. Char
gracethatflows@yahoo.com