Holy Sh*t That Was Amazing

I'm pretty sure my recap of the Katy Perry concert won't be the only one with that sentiment.

It might, however, be the only one to recount the tale of a 42 year-old man crying at a pop concert.

But before I get in to that, I just want to pause and take a drink of this chocolate milk, eat a glazed doughnut and marvel at the genius of a local doughnut shop that opens its doors at 130AM. Brilliant. 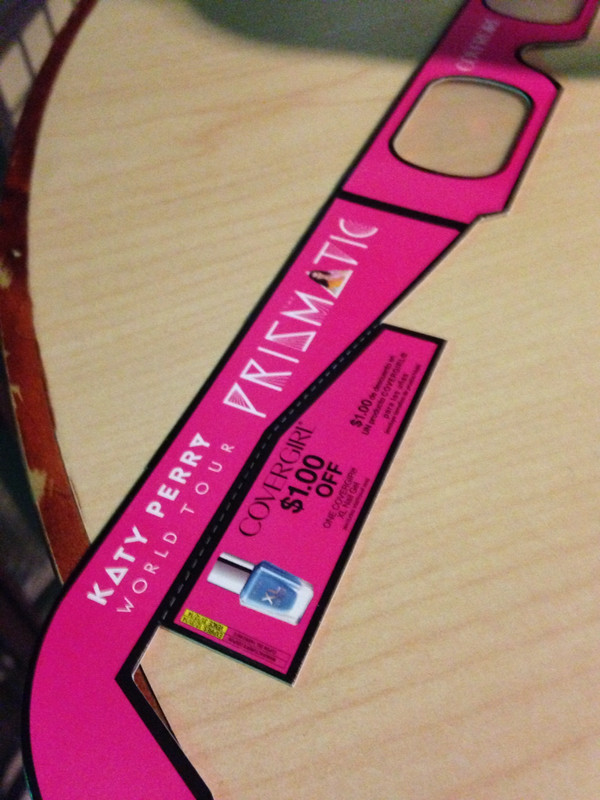 My seats were in the Prismatic Reflection Section. A.K.A General Admission. A.K.A. Close Enough To See What Miss Perry Has Airbrushed Out On Photo Shoots. And I don't mean that in a bad way. I simply mean, there were many times during the show I could have reached out and touched her. Had I done that, though, I would have missed the awesomeness that has placed this show in my top 10 concerts of all time, maybe even top 5. In short, it was f**king Amazing. And, unlike the mouthy dad next to me, I wasn't about to do anything that would have got me kicked out.

The opening opening (normally what I call the throwaway) was some dude called Ferras. I'd never heard of him. And, judging by the fact that his promo CD was part of the merch bag, neither has anyone else. I chose that tme to chow down on some overpriced eats and to get my souvenir t-shirt and concert pins. I then went down to my area. 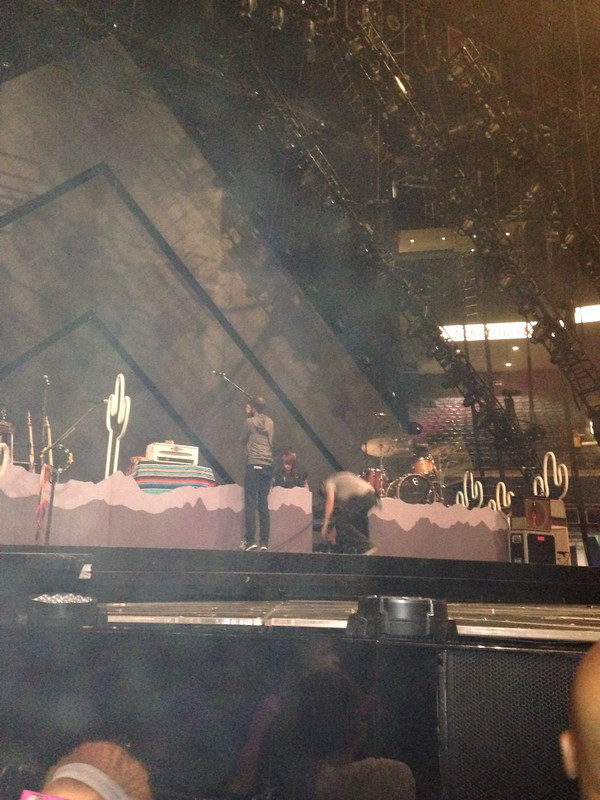 See that black Devo-looking-hat-thing? That's the edge of the stage. Yeah. I told you I was close!

The opening act was Kacey Musgraves. She's a country singer...and I was more than a little surprised to realize that I knew some of her songs. It was actualy quite a bit more enoyable than I could have imagined. 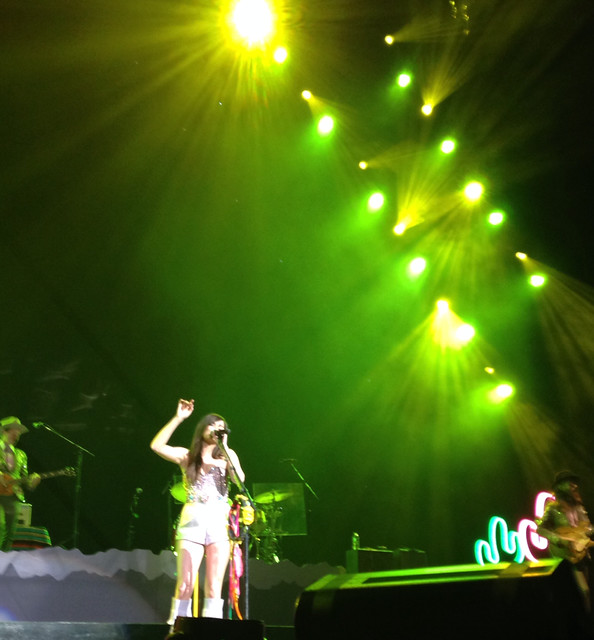 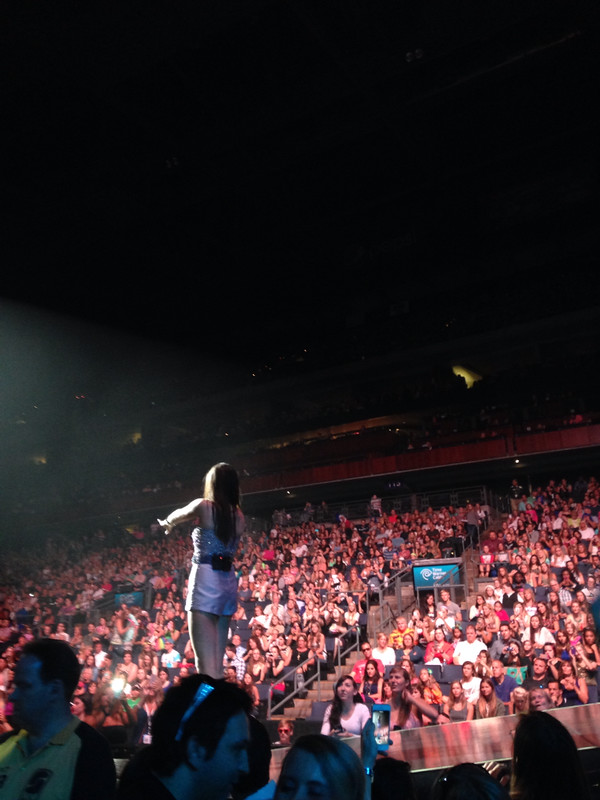 There was quite a good turn out even for the opener. 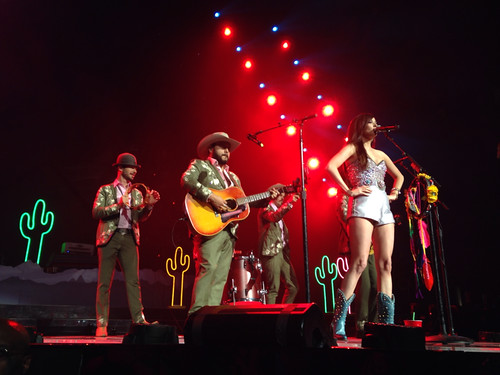 OK. In the interest of full disclosure, the line above was me falling asleep in my chair.

I don't have a clue at this point where I was going with this...I know that at the time I started writing it I was high from the concert and I'm sure quite buzzed from the glaze on the donuts.

My bladder behaved, so I didn't have to give up my choice seats between sets. I was still checking lighting on the instant pics and hoping like hell I would actually get some good shots. Spoiler alert--I did.

I knew this would be a rare event for me, so I also planned on getting some shots with my cell phone. All in all I would have to say that I managed to capture the moment in both digital and print in a way that I would remember it from years to come. Here's a few shots (I took about 40 each of instant and digital, but I'm not going to put all of them here). 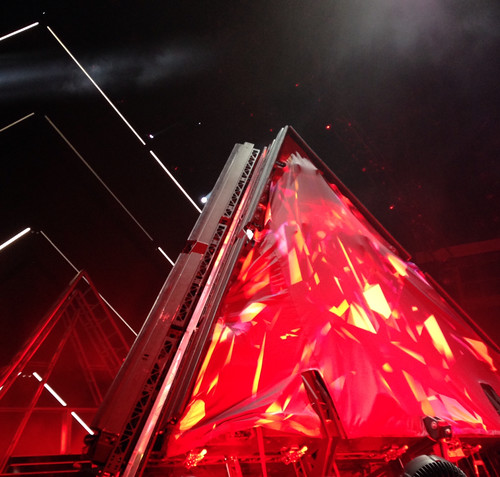 The stage rose to form the pyramid above. 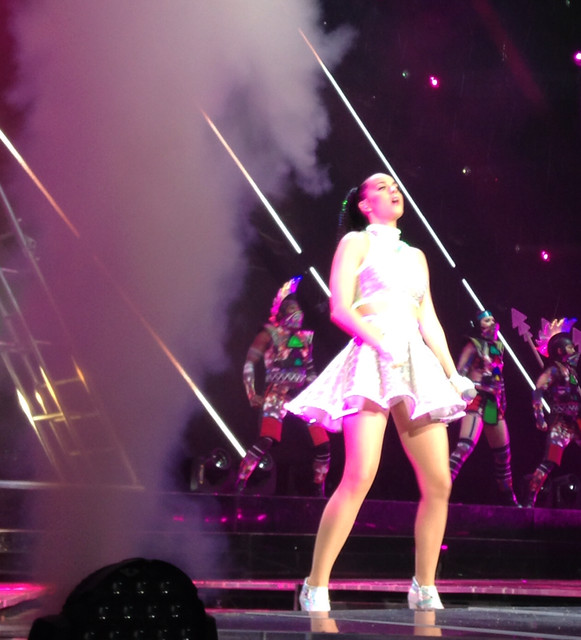 Out of which popped Miss Perry, 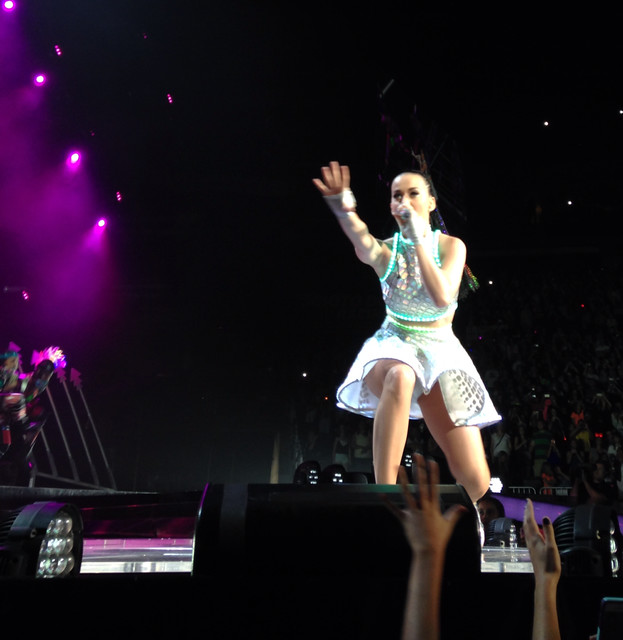 I was really close to the stage the hands you see in the lower portion of the above pic were right in front of me. 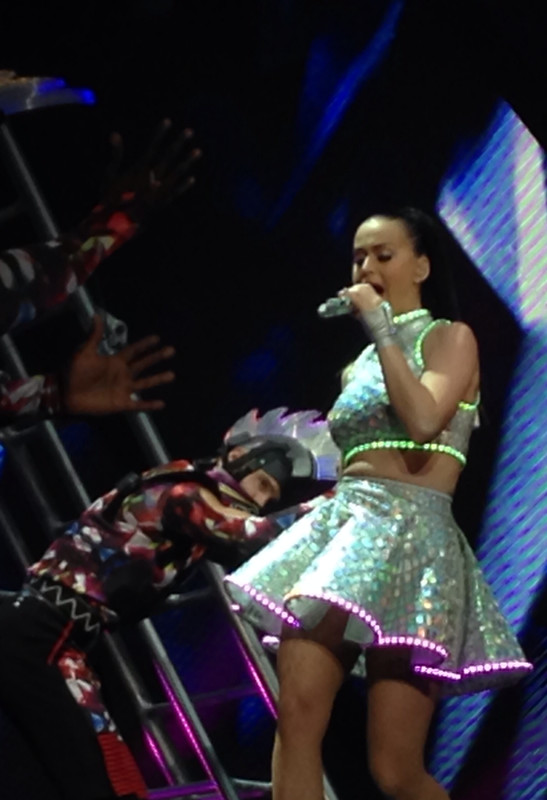 This was zoomed a little from my phone, but not much. 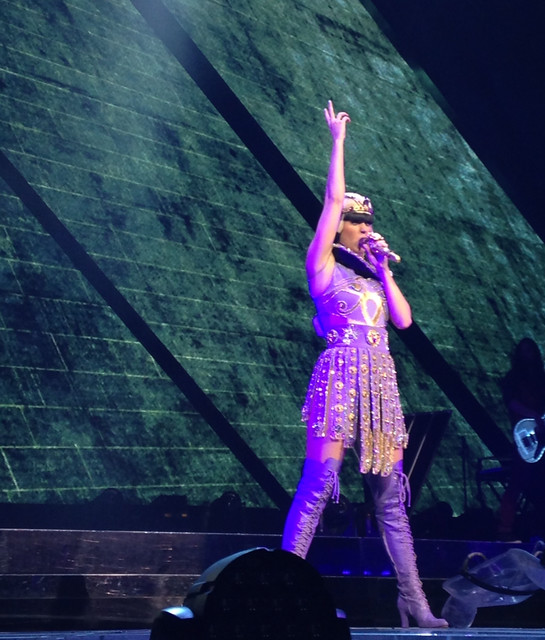 I lost count of how many costume changes there where and how many of the costumes had a similar base that was only slightly altered to look like a whole new costume. It was almost of a Weird Al magnitude of changes and looks throughout a 2 hour show. 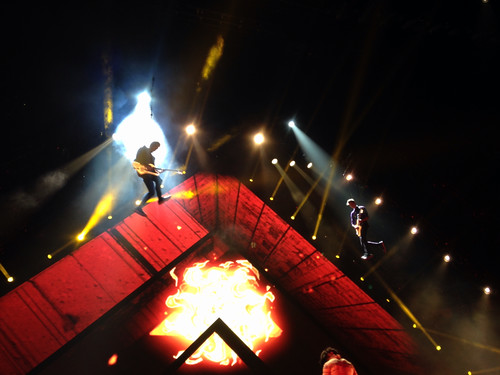 The guitar players flew through the air. Over Fire. And shot sparks out of their guitars. Me? I have problems just getting a Barre A chord, let alone flying pyrotechnics. 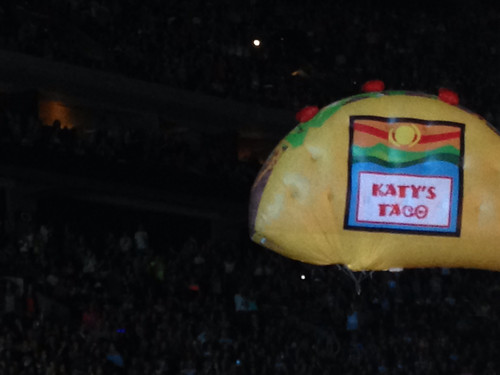 Yes. My inner 12 yr old boy was there...but c'mon...how many times in my life will I be able to say I snapped a pic of Katy Perry's taco? Right? 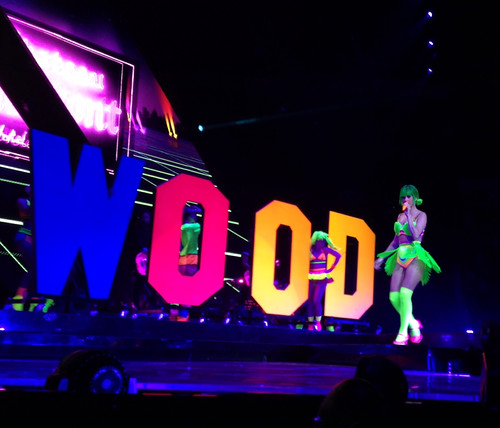 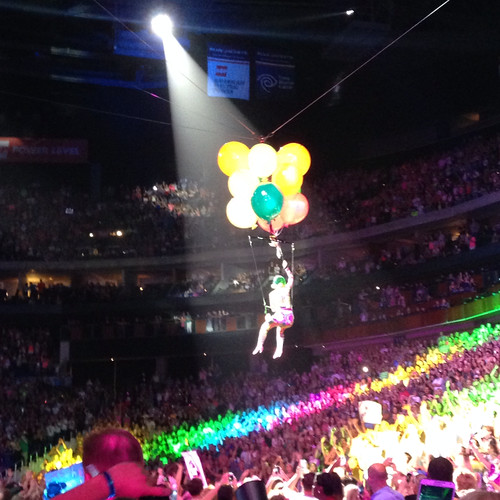 So many elements about this show blew my mind. This was more than just performing music...this was delivering a show. Big damn difference. 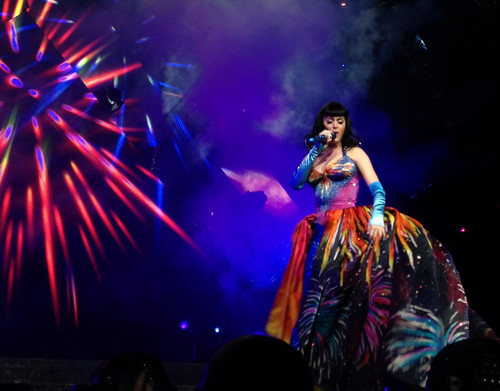 This was one of the encores, "Fireworks" (naturally). The other was "Happy Birthday." Both were amazing. 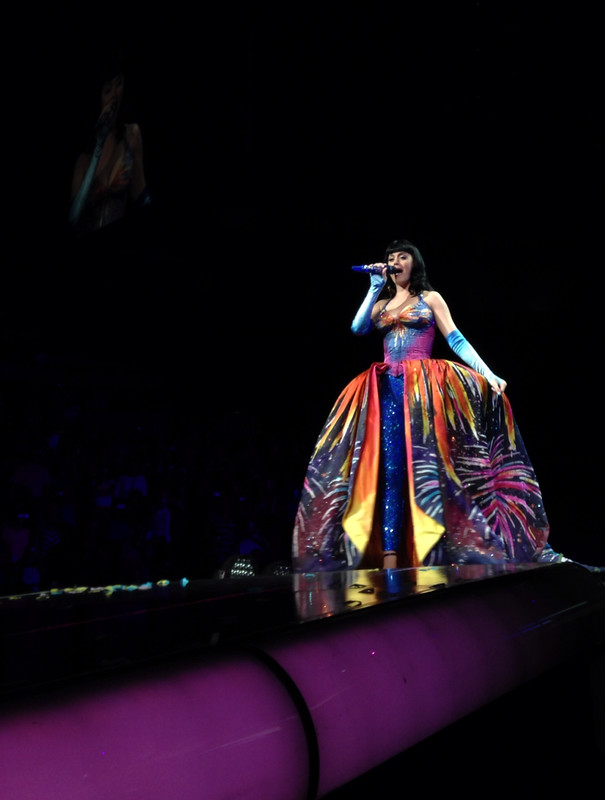 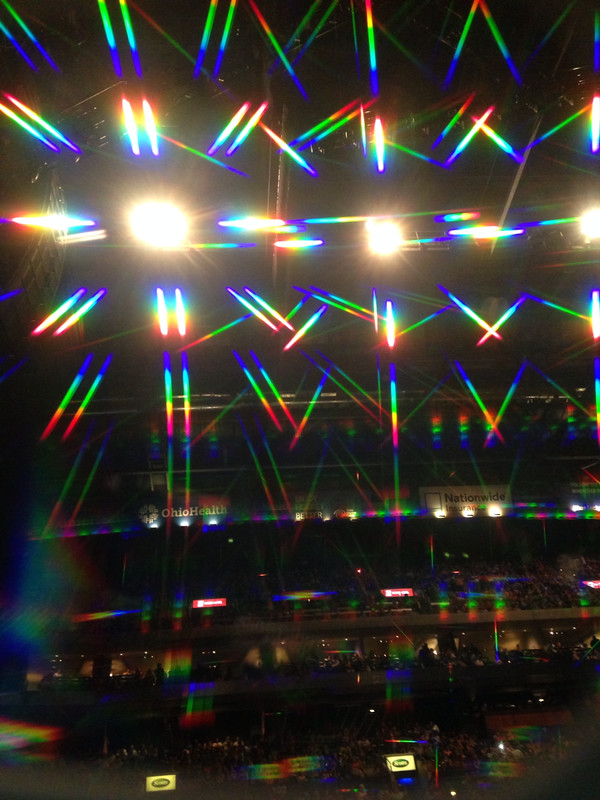 This was what it looked like when you put on the Prismatic glasses. Very cool effect. I got an extra pair to keep with my camera so I can do shit like this elsewhere.

So, Todd...what's this about a 42yr old man crying at a pop concert?

Ah. So glad you remembered. Here's the thing. I found Prism at a time in my life where I was going through some shit. Coincendentally the same kind of shit Katy Perry was going through. Some of the songs when I heard them hit me WAY harder than a pop song should. So...yeah...some songs like "By The Grace Of God" really hit me (So I looked in the mirror and decided to stay. Wasn't going to let love take me out that way), Yeah. Boom. Right between the eyes. If she had performed 'Ghost' I would have been a blubbering mess.

Music is important to me, it gets in my head. It gets in my heart. Her music moved me. Still does. So..to be that close to her last night was amazing. It was powerful to think that in the dark corner of her room somewhere sometime, she went through the same shit we've all gone through....but she put her pain out there. And last night, I just felt that amazing awesome wave of....meh...I don't even know the word.

But it was fucking awesome.

And the other thing I know...that as long as I'm physically and finacially able when I see a concert, it's going to be as close to the stage as possible even if its in the standing/GA section, because holy shit was that awesome.

I had all kinds of deep things rattling in my head last night when I sat down to pen this post, but I think it's best summed up by saying, it was truly a magical night. 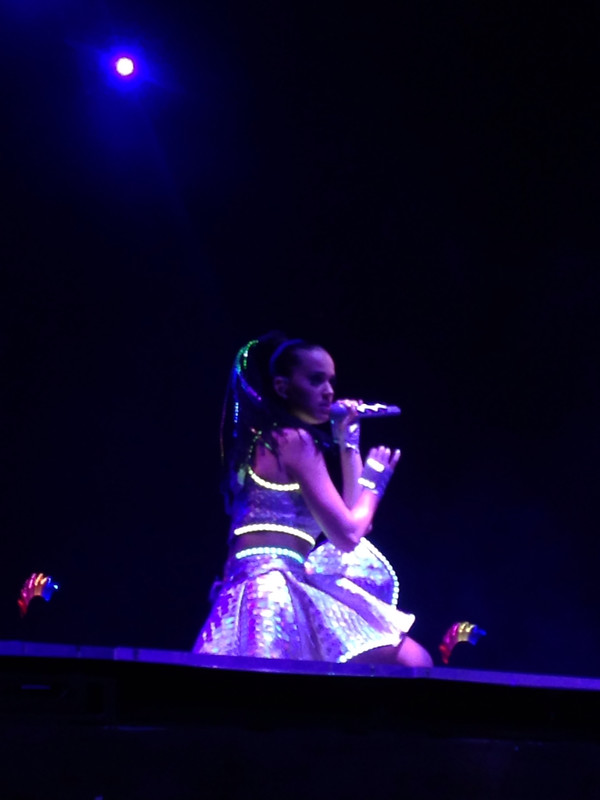 (Better here than floating around my head...Thanks Blogsy)
at August 14, 2014