Today was the Annual Cleveland National Air Show. And out of the last 5 or 6 years, I've only missed one. My friend always gets a box every year (10 seats...show center--basically the first row you can sit in) and he, his parents and us go and have a blast.

Last year there were no military demonstration flight teams, so I didn't go. This year, though, THESE guys: 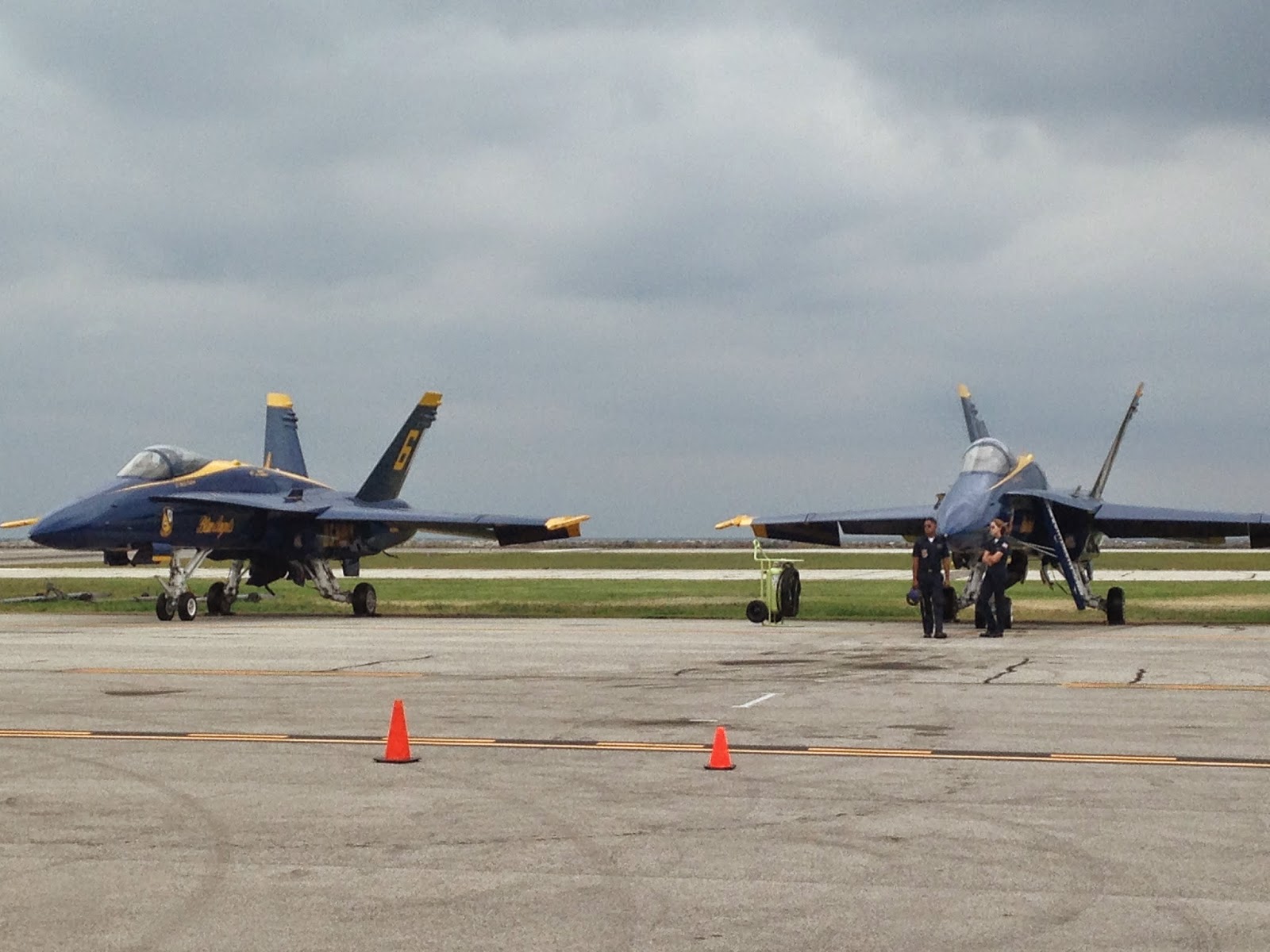 The Blue Angels. Yeah. In past years, I have taken my big camera kit and taken some really kick ass shots (if I say so myself). But I realized something (and it's something that I figured out after getting the Instax)--I got the great shot, but I missed the great day. The laughter...the jokes... the friendship building. Missed all of that in past years because I was always angling and aping for the 'perfect shot.'

This year, I only have 6 or 7 digital shots....with my phone. And over 80 instant photos. They're already in the photo album (you're welcome to come over and check them out sometime).  No...they're not award winning...or breath taking...but I have no doubt they will trigger memories of an amazing day.

An amazing day that started with a minor heart attack (no not really) after I got parked. I looked at the paper that the parking attendant handed back to me and found that he had kept the full ticket (not just the stub they keep when you pay for parking. The place I paid and the place my car wound up were roughly 200 yards apart. So...instead of driving back (it was a pretty good parking spot)...I walked.

I explained to the peeps in charge what had happened. And they couldn't find my ticket. Which meant...I was going to have a hard time getting in to the sponsor box area.  They found the stub from my ticket though, and said that would be good enough. OK. Groovy.

I started walking back and they wound up giving me a ride on the golf cart...which was even groovier.  I got back to my car grabbed my backpack with 23 spare film cartridges. And the duffel bag (not cooler) full of a case of water (which weighed probably...well...30lbs or so) and started huffing it to the gate.  Yes. You read that right. 23 spare cartridges of film. 230 shots..+the 10 that were already in the camera.

It seems like a lot (because it is), but to be fair...when I had my digital camera with me in years gone by, I would shoot 800+ (half of those during the Blue Angels or Thunderbirds). So, at the time it didn't seem like much of a stretch. I only used about a third of that, but I'm skipping ahead.

We all met up. There was much rejoicing (yay). I was happy to set that friggin' bag of water down. CJ's parents are awesome. They always make kick ass sandwiches. I basically know that I don't need to spend money on food. And I made sure no one had to spend money on water this year.  It's win-win.

Most of those speak for themselves. But I'll get to the explosions in a minute...but first....Canada. There's a (now) running joke about how close Canada is to the air port. Last time we were there, the F-18 fighter pilot that came in flew in from Canada...did his routine and flew back. It was nuts. So...we talked a lot about how you could see Canada...and how they could just pop over here. Which leads us to this. The * from above.

Dynamite explosions. First off...you have to wonder about Air Show personnel who let in an act with someone called "The Mad Bomber."  Seriously? Can you see where this might go awry?

Anyway, during one of the air demos, they simulated a bombing run. And the announcer mentioned that The Mad Bomber would be using 10 sticks of dynamite.

And shit went boom.   I didn't get a pic of it. But...afterwards....a not so small fire broke out in the brush. 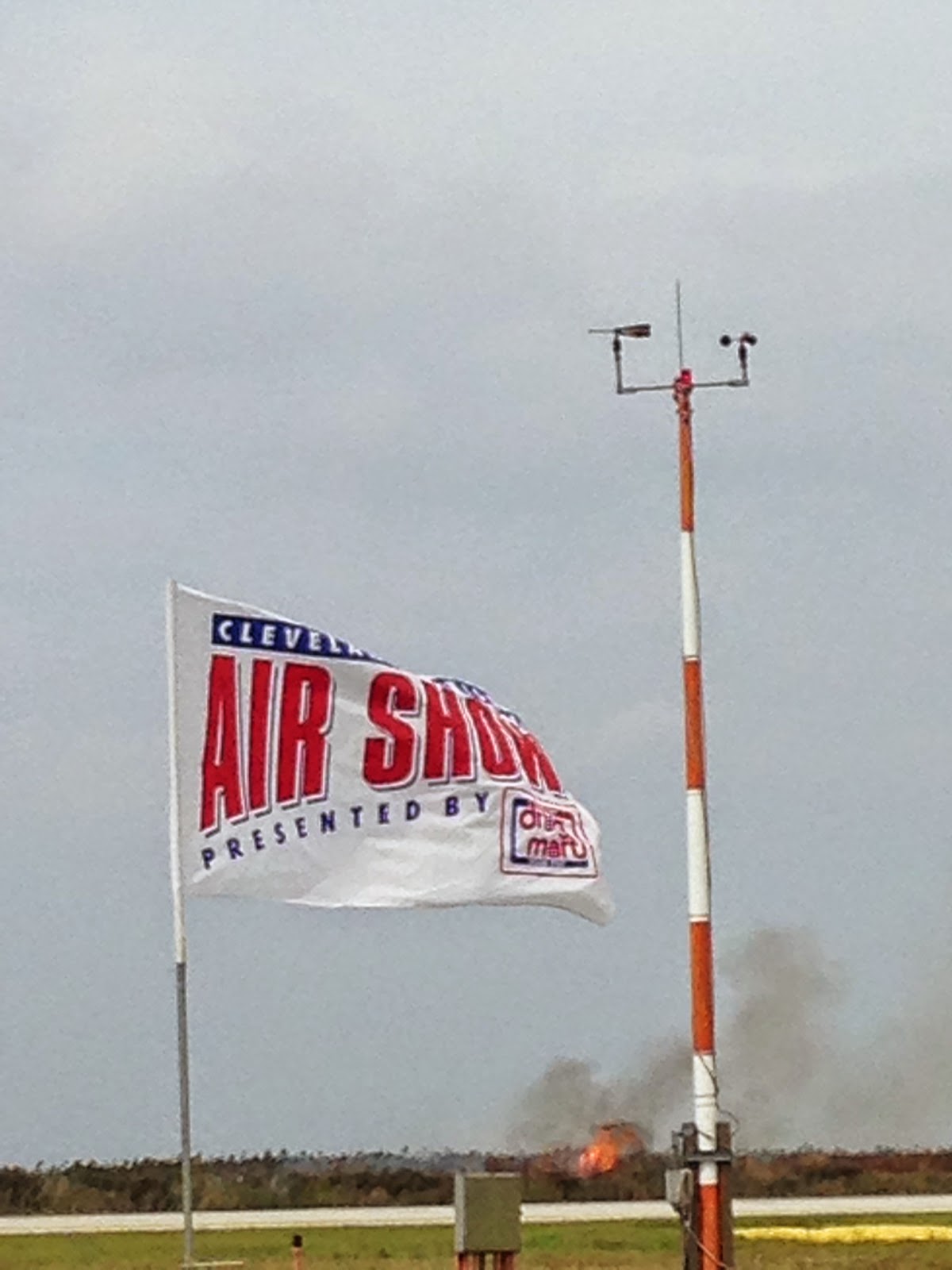 It was kind of crazy...but luckily they had a fire truck on the shore and he headed to put out the blaze.  Which was fine....until he got stuck. 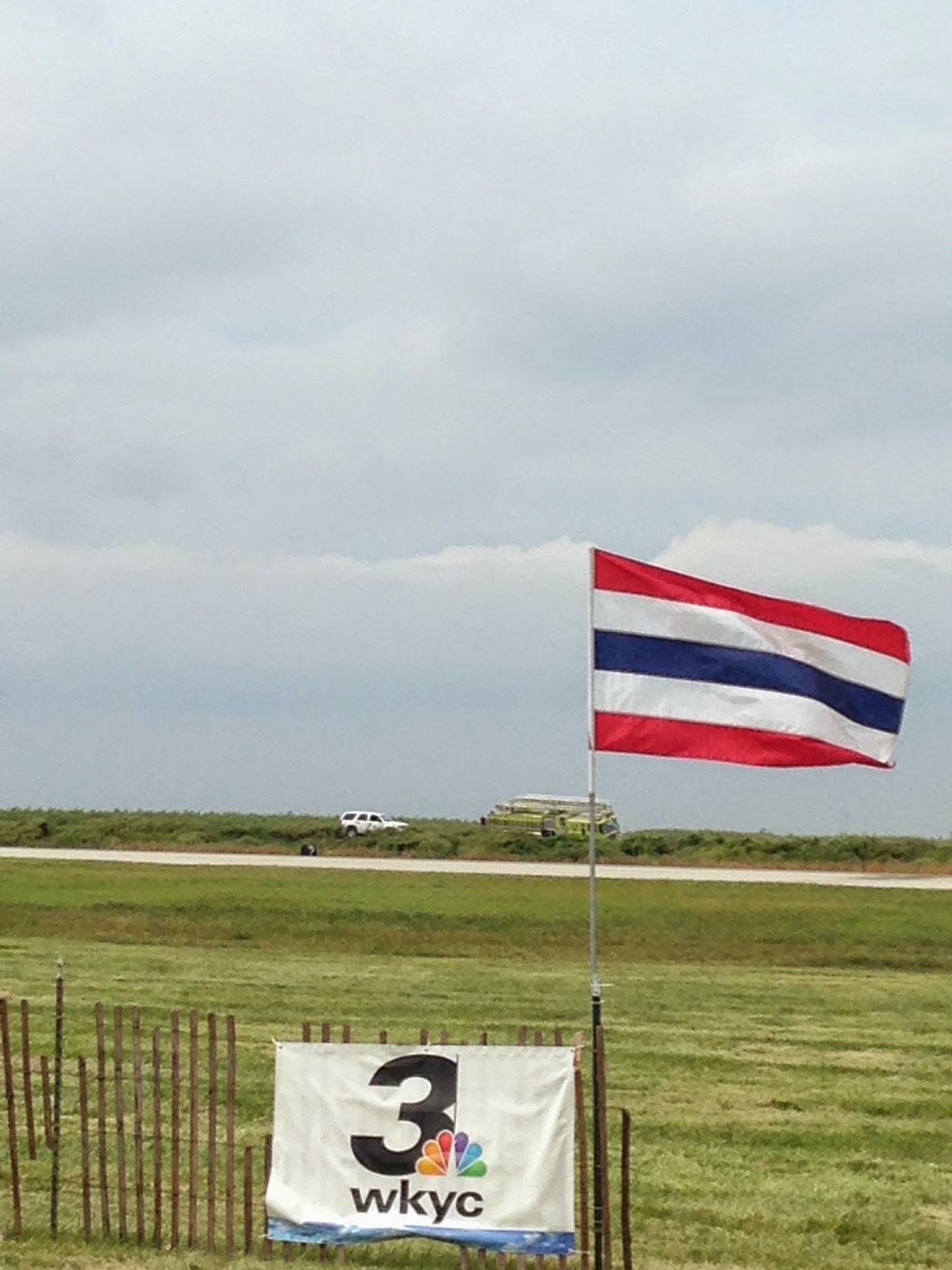 Yeah. That happened about 2 something. I left at 6. He was still stuck when I left. It was crazy. But no worries...another fire truck came from the other side (we naturally assumed he was from Canada) to save the day.

Did I mention there was a Harrier Jump Jet? And did I mention how incredibly loud those things are??

This is when it was hovering up and down as though on a string. It was nuts.

And amazing (it made me feel like a kid again, more on that later).

But it was really fucking loud. 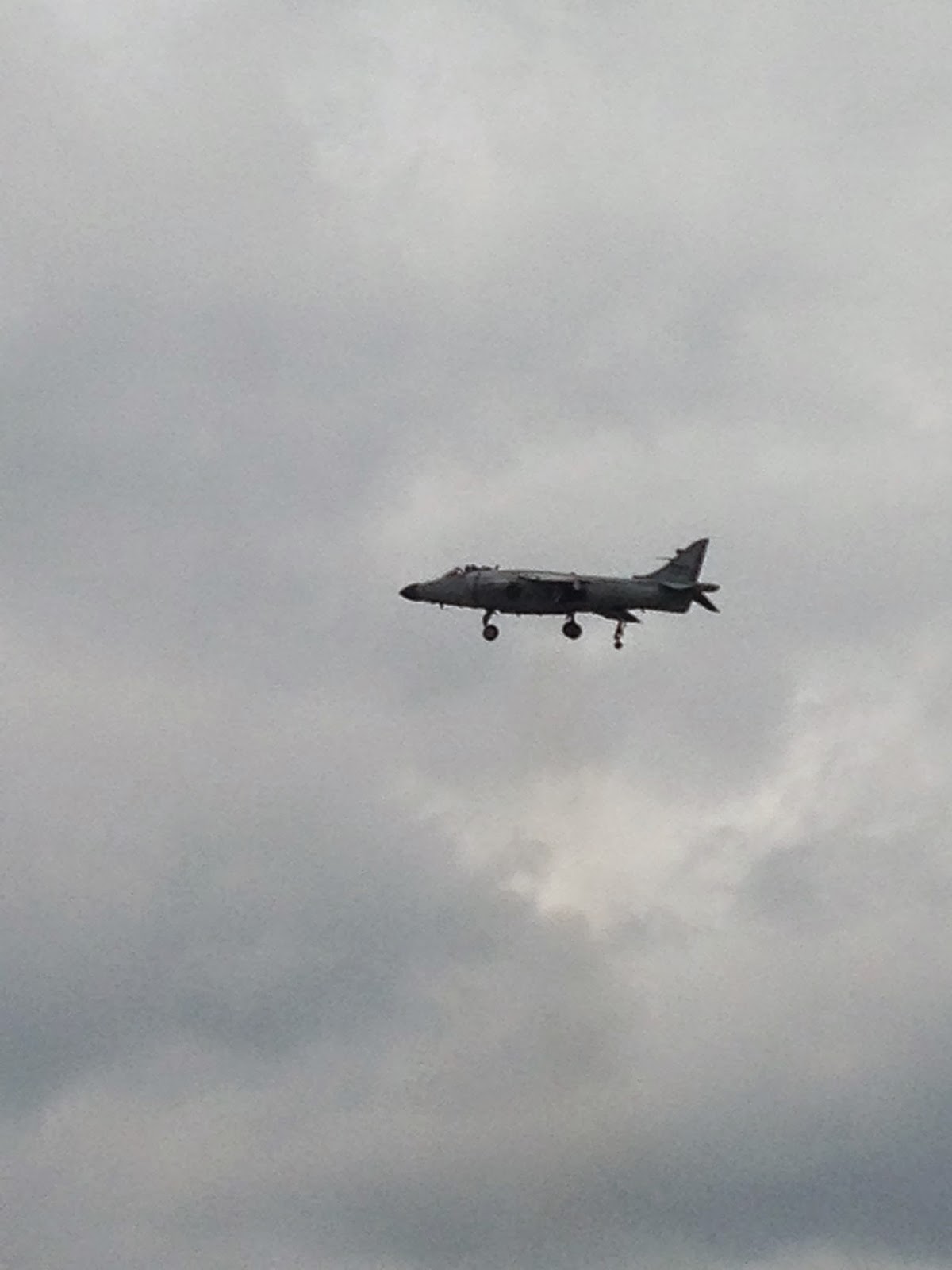 This is the shot when it was coming in for landing. 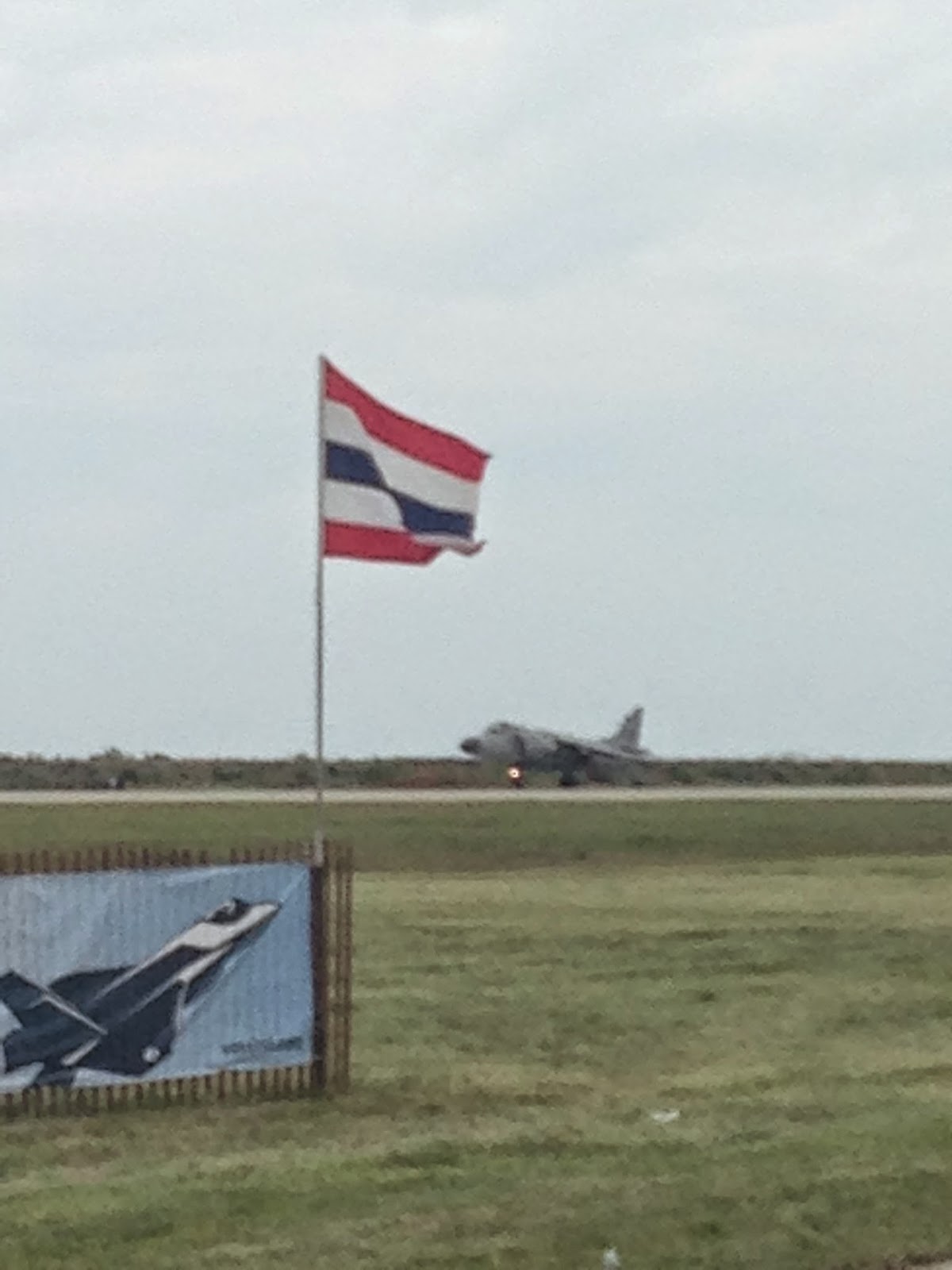 That plane is one bad mamma jamma.

Somewhere along the day we discovered that Noelle had picked up a guard cricket. It watched her bag the whole day and actually went home with her. Despite Brian's best efforts to pretend to eat it. 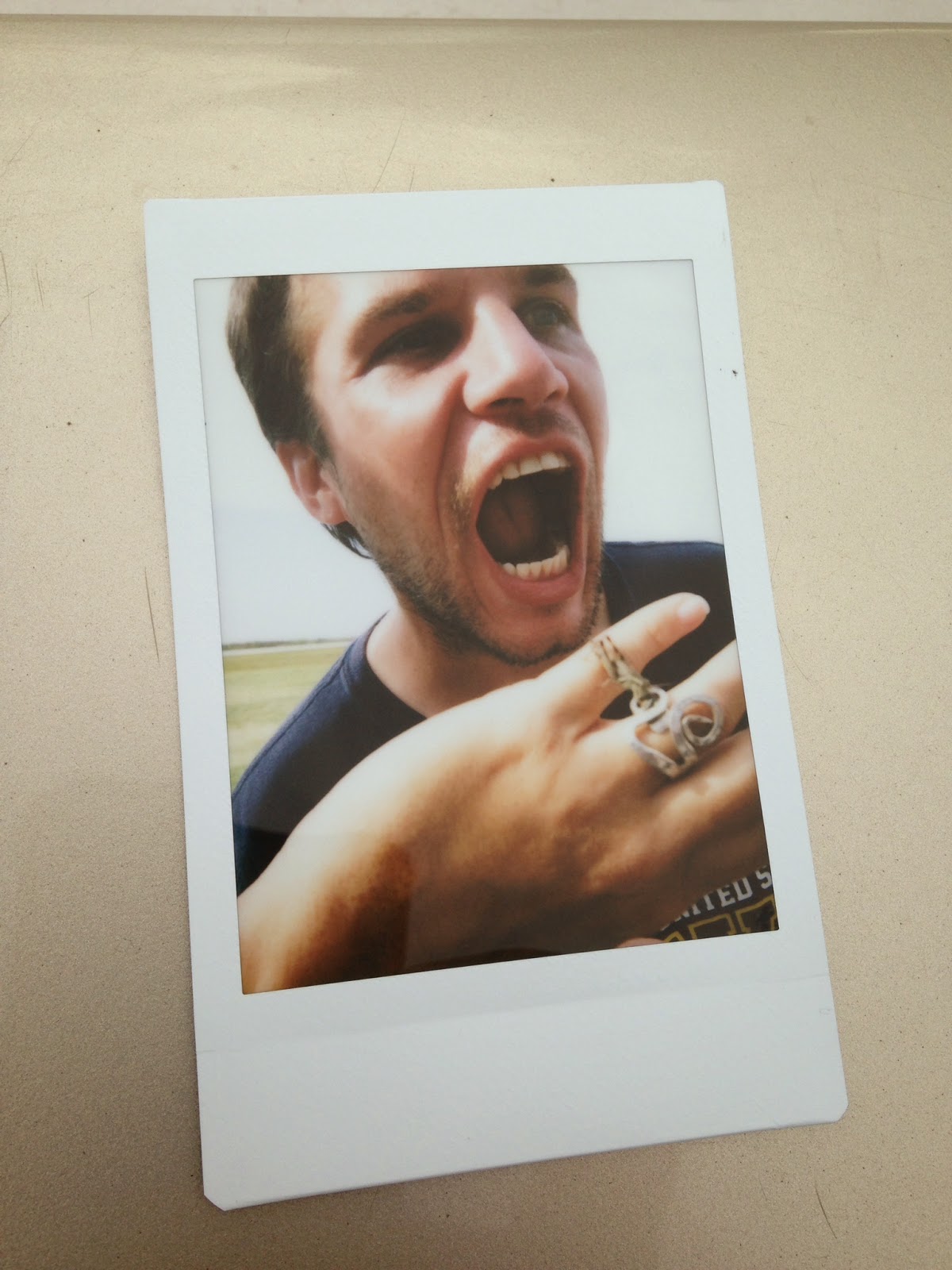 I have one digital shot of the Blue Angels routine, too. 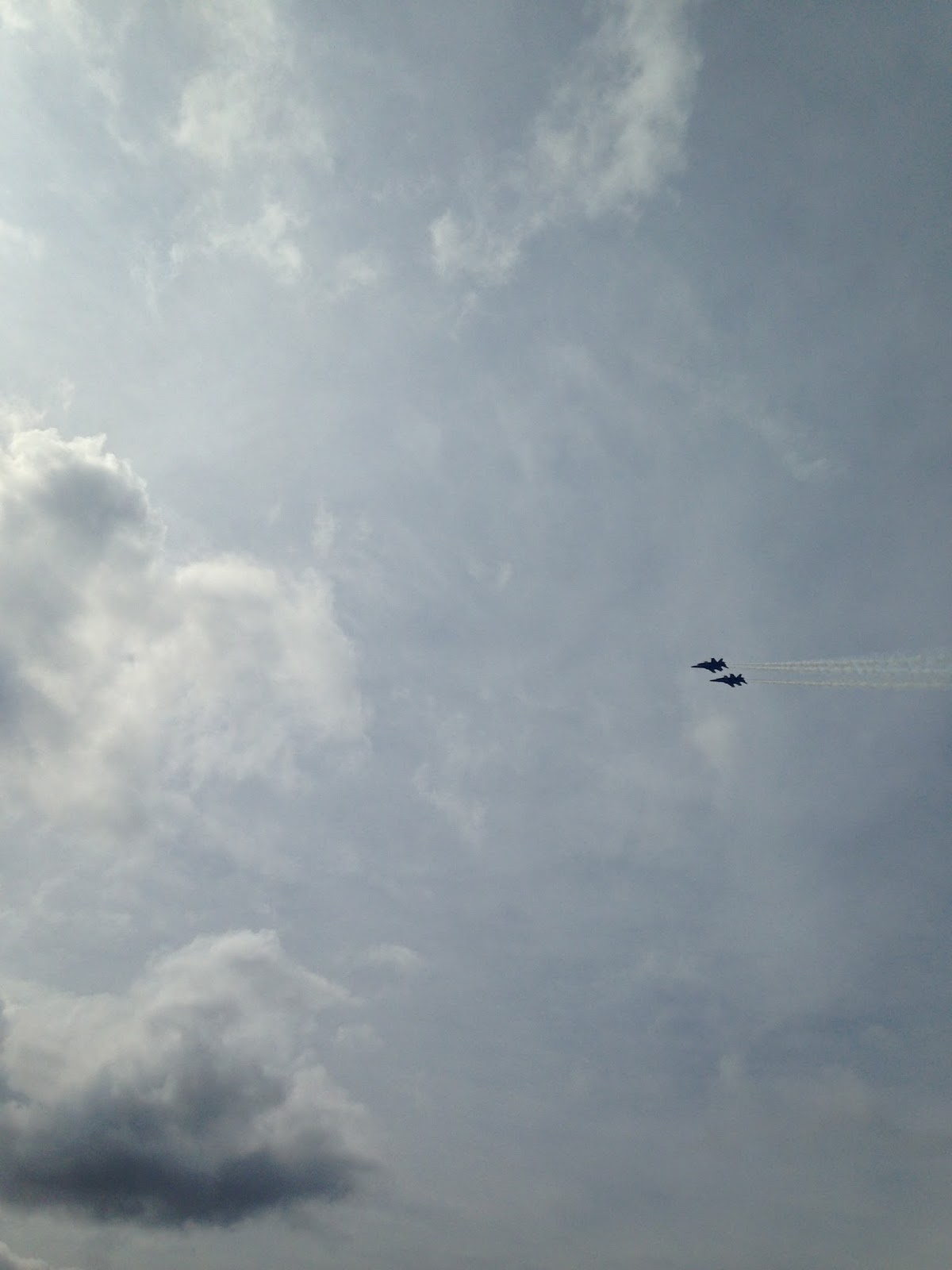 I didn't say it was a great shot or anything.

The only thing that really could have made the day any better than it was would have been if the Jack Link's sponsored Jet powered Bi-plane dropped beef jerky on the crowd.

That would have been epic. Well, another instance of epic in a day filled with epic. I don't think I laughed so hard, so often in quite a while. It was fun.

More fun that it would have been trying to get the shot. At one point during the Blue Angels, I was checking to see if I got a shot, Noelle nudged me and said 'stop looking at pictures...the show's up there.'

And damn if she wasn't right. I took some pix..and put them in my pocket as soon as they came out of the camera.

The sense of awe of watching an air show that I had as a kid came back and I was filled with a child-like sense of wonder again. Watching these men and women do things with machines that really shouldn't be possible.

And I got to see what is my all time favorite air show move...the Blue Angels Diamond something something. They all fly right at the crowd in a delta formation and they they all break off in different directions at the same time. It's epic. And so amazing to see.


I thought it was going to be a crappy day. It was pouring down rain when I left Columbus. And rained a lot of the way home, too. But at the Air Show, the weather was perfect. The day was a blast.

It's funny. In the sponsor boxes on either side of us were photographers with big ass lenses (bigger than the ones I have). And I could hear the sh-lick sh-lick sh-lick of shutters in continuous/frame-burst mode during the entire show. And I thought to myself...they probably got some great shots.

But I had a great day.


And as I was getting out of my car and taking my bag in, I saw this on the front passenger floor of my car.... 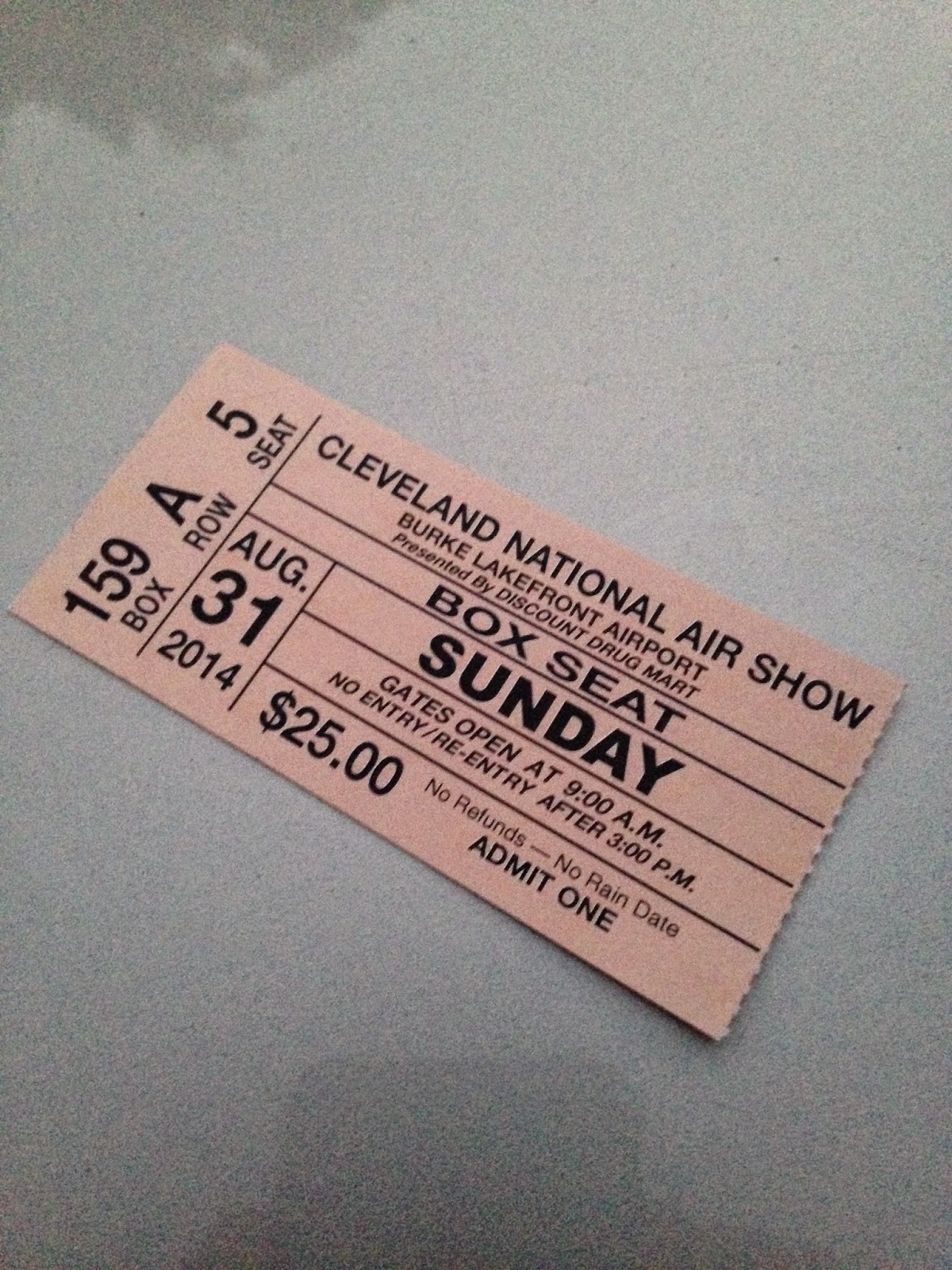 Ummmm. Hmmm.  Apparently they had not taken my full ticket. Hmm. Imagine that.

Alright...I'm wiped. Great days will do that to you, I suppose.