The Reason Good Tools Are Expensive

Simple. Good tools are expensive because they're worth it.

I liked many things about the Sharkk iPad mini keyboard case. But the two things I could not get past were the question mark in the wrong place on the keyboard and having to use a Fn key (not even a shift key) for the apostrophe ('). Those seem like really small things. And I had a co-worker tell me "Just retrain your brain-no big deal." Except it was a big deal. On my laptop, on my desktop, on any keyboard I used, those keys were in a different place from the keyboard on my iPad mini case.

And everytime I sat down to write with it, something about those two things would just completely halt the creative flow. I had to think to much. I wasn't able to just type (it's very tough for someone who's been touch typing since 1989 to just 'retrain their brain'). I tried. I really did. But was no good. Wasn't happening.

I looked at other iPad mini keyboard cases. Convinced that I still wanted something self contained so I wouldn't have to carry two pieces of gear. Almost every case in my budget suffered the same fate-size was the goal and people who could actually touch typed would suffer.

Now-don't get me wrong. Would it do in a pinch? Sure. Quick messages, whatever. It would totally be fine for that. But that's not what I wanted to use it for. I wanted to use it as a replacement for having to take my laptop with me everywhere. Something I could throw in to anybag along with my journal and have the tools to write whenever, wherever the fancy struck me.

It was clear I would need to step outside of the budget I thought I had set for myself. A couple of people at work had cases by Clamcase. The keyboard decks were aluminum and had a MacBook Pro feel too them. Everything about them was high caliber. Including the price tag. The case for the mini was $129. Almost $100 more than what I had paid for the Sharkk case.

I can tell you this with no hint of bullshittiness--It was worth every penny. I'm typing this post from the case. And I have to say, it types like a dream. It doesn't feel too terribly small. I mean, I know that it is, but what I mean is that the size doesn't detract and the typing is natural. No more getting distracted while I look for the effin' Fn key.

All in all, I've reached the conclusion that sometimes, for something you're passionate about, you have to pay a little more for the better tools.

This is definitely one of those times. 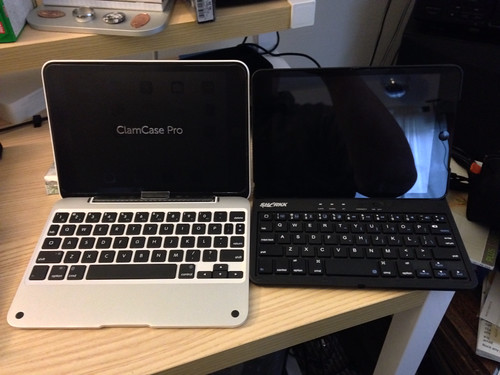 Even side by side, there's no comparison. The ClamCase Pro is just better. It's honestly like the difference between a cheap Windows laptop and a MacBook Pro.

I'm going to have to get used to not having access to the Mute button, but as I'm writing, that's a far easier thing to deal with.

Have a kick ass evening friends!

(Better here than floating around my head...Thanks Blogsy)
at August 12, 2014