Too Early For This Sh*t

I don't know why I put the * in Shit in the title but say it here. Doesn't make sense to me. But I do it anyway.

These are some of the trappings of thought that go through my head as the last of the NyQuil is wearing off. And I need to trim my nails. Typing or playing guitar with nails that are too long just doesn't cut it, it's annoying as shit. See? There I go again. Cue Whitesnake.

Now you know. And....(cue shooting star shitting a rainbow as it flies across your screen) "The More You Know..."

I could have gone with the GI JOE reference there, too...ya know.. 'Knowing is half the battle' but let's be honest....it's not really, is it? I mean....big ass guns are one half of the battle, and people willing to shoot them at each other are the other half.

So...thanks to not being on Facebook I have missed* two things. The first is hearing that Robin Williams' motivation for his self-offulation was likely induced by the knowledge that he had Parkinson's. My dad and I had a good talk about this. For a man as brilliant as he was to find out that his greatest tool would be slowly stripped away from him could definitely be devastating. I would like to think that if it were me, I could find some way to make it through that, but I'm gonna be honest...I just don't know. It doesn't change the fact that it pisses me off and that I still think suicide is the single most selfish act a person can commit, but...I get it now.

(arched eybrow). Again. No. I thought my first "no" made that clear.

Well did you see--

Dude. No. I didn't see it. I have no idea what the fuck you are talking about. I assume it's a fundraiser of some sort based on the age old tradition of dumping the water cooler on the coaches head after the team wins the big game. I don't know exactly how that's supposed to raise money. Do they ask for donations based on the number of cubes in the water or what? Don't know. Don't care. This is one social meme that I am more than happy to be blissfully ignorant of.  It apparently has gotten so annoying, that a few of my friends have told me that I got off Facebook just in time and that they were considering letting their profiles go dark for a month until the whole thing blew over.

*miss/Missing. I use this term loosely. Or rather, ironically. I have not actually missed (or been longing achingly) for either of those things. Neither of those things are compelling enough reasons for me to return to the time/soul suck that Facebook had become in my life.

I am finding that small doses of Twitter, the methodone of social media addiction, seem to be ok for me. It's FAR less of a rabbit hole for me and much easier to regulate my usage. And it provides much the same useless, mindless prattle as FB did, only without much of the bitchy in-fighting.  @atskaggs71, if you are so inclined. If not-that's ok  too.

The cold has moved to the 'thanks, but I think we'll be going soon' stage. Which is nice. I don't like being sick. Although, I'm suspecting it did wonders for my 24Day Challenge because I really didn't have the taste buds or desire to snack as I normally would have. So, go Todd's Body....well done you!

I resisted the urge for Pizza last night. Mainly because there was no place to get Rofini's pizza anymore. But also because of the self-chastisement I knew would ensue shortly after consumption. I'm going to get through this next 20 days playing it by the books. On day 25, I'll have my pizza. And beer.

Speaking of beer, I should get ready for work. But first, this.... 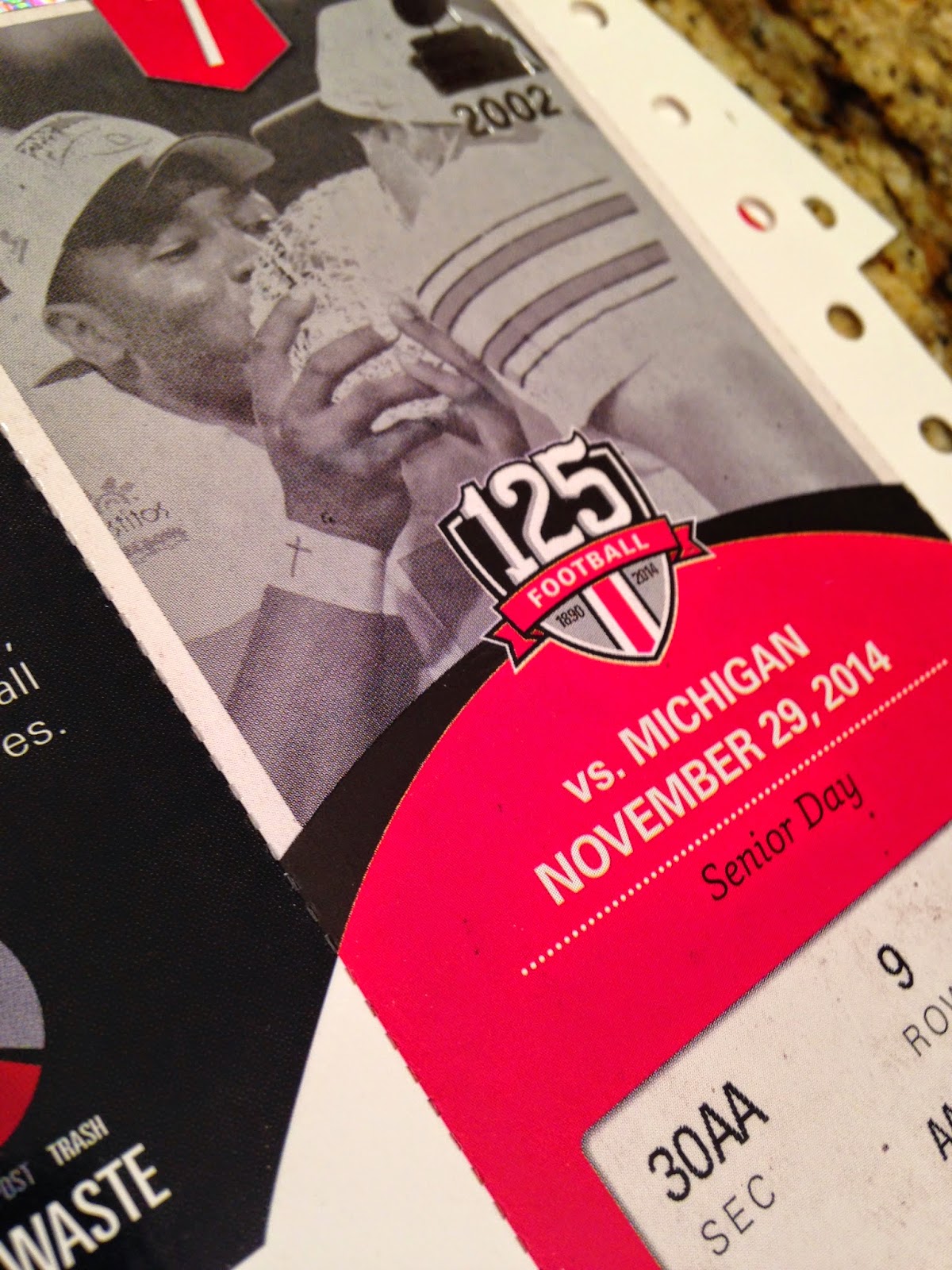 That's right. We got our tix. Steve and Dad and I are going to be dividing our games up this weekend. There are 7 home games and 3 of us. We are each taking 2 games and likely looking to sell the 2 Michigan tix. So...if you are interested...let me know. Looks like Tix are going for $300-$400 each. We'll see how it shakes down. Hell...I have an extra pay check in October...maybe I'll just buy out my dad and brother and treat myself. Who knows? Maybe that's the NyQuil talking. We'll see.

Have a kick ass Friday Eve my friends!!