The Surreality of a Single Second

When someone says something is ‘surreal,’ I believe they mean that something is/has/or will happen that is outside of the normal parameters for what they have up to that point known as their reality.  I have some experience in this definition, as I tend to find things like that on an almost daily basis.

Yesterday was no exception. Dad and I were on our normal sojourn to the Farm. This is something we do or try to do every month or so. The Farm is in Kentucky, and if you knew anything about my history with this place, you’d stop obsessing over the fact that I tend to almost always put it in caps. Yes, it is that important to me.
Our route takes us down 23 southbound for almost half of the trip. Although, after yesterday, it’s possible we will find another way around Chillicothe.
I remember this as though it was yesterday, because…well, it was yesterday. But, after what I had seen…been a part of…I imagine that in 50 years when I tell the story, I will still preface it by saying I can remember it as though it happened yesterday…

I was on the phone with work-my day job. I was on my phone and in a pocket of coverage where T-Mobile happened to still work. As I was talking, time slowed down and found myself saying the following

“Holy Shit. I…Holy sh— I gotta let you go. An accident is happening right in front of me. I’m going to have to call you back.” 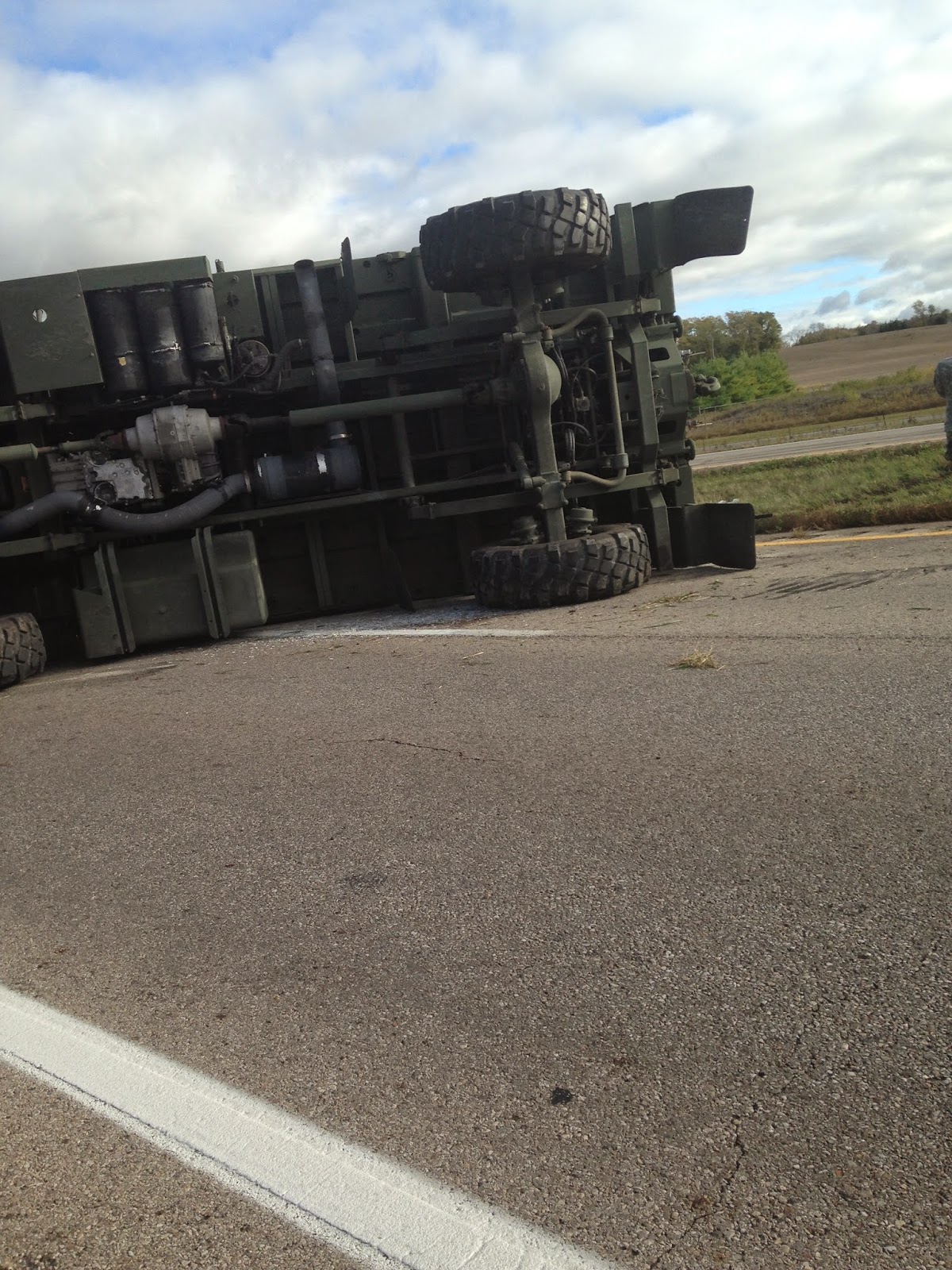 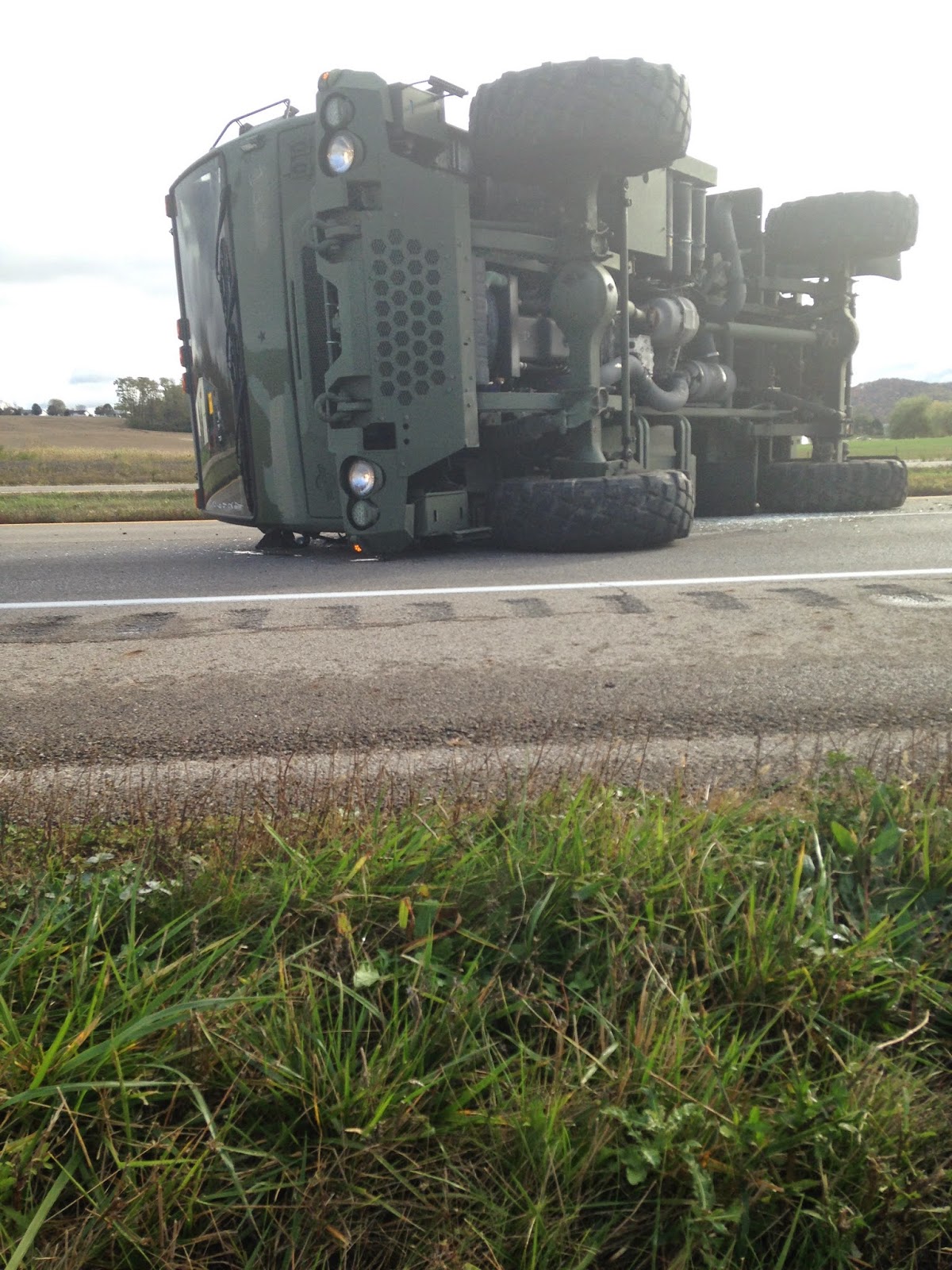 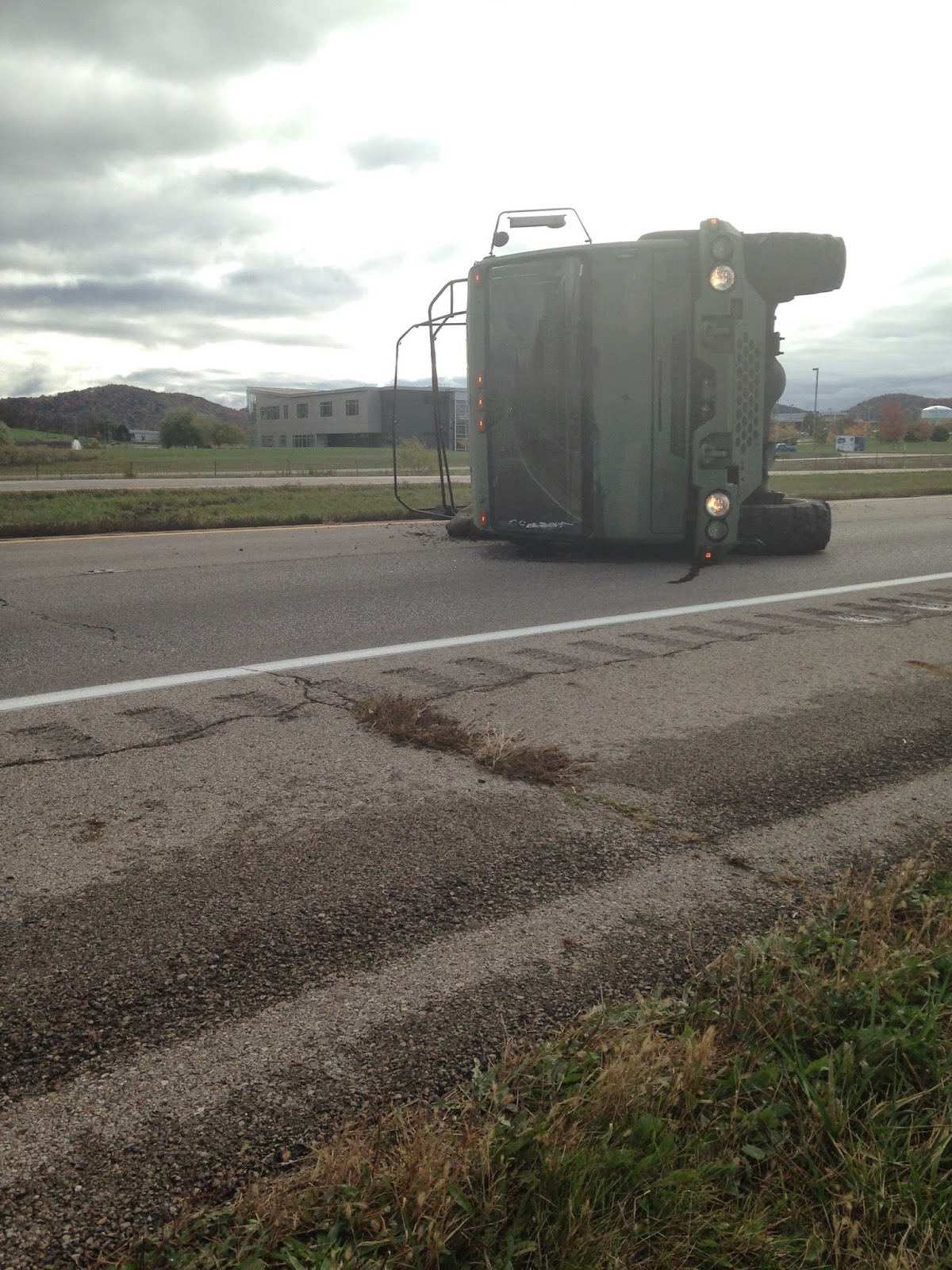 My co-worker started to say something. But I didn’t hear him as I hung up the phone. I set it in the center console and mentally braced for impact.
What gave me pause first of all was the sound. It was the sound that caused me to look up from my phone call. The exact sound is from the movie The Terminator when Ahnold is driving the semi-truck and he locks up the brakes on all 18 wheels. That monstrous groaning like a giant whale too far from home…the screeching….the sound of rubber going against the grain on asphalt. In short, it was the sound you hear when you know something is totally fucked.
That sound was what caused me to look up from the call. What I saw prompted the holy shit comment and quick termination of the conversation.
It was an army truck. Dad called it a deuce and a half.  It looked like the kind that troops sit in, only there was no canvas over the ribbing. And it was on the other side of the highway. Going perpendicular to the road. Making that godawful sound. And then it was in the median….still sideways although seemingly gaining speed as it was about to make a glorious entrance on to our two lanes of the highway. We were in the rightmost lane traveling south. The truck was now flying up out of the median (yes, I swear it seemed airborn) in to our lane- directly in front of us.
As it hit the pavement, it came in on two wheels.  I thought for an instant that it would actually right itself and all would be copacetic with the world. It didn’t. If flipped.
We hit the brakes and swerved right. Almost in the ditch ourselves.
I’d been playing with my seatbelt for a large part of the trip. I can’t be certain if it locked or not. If we had hit the vehicle, I’m not sure it would have held.
But we didn’t hit them.  We didn’t wind up in the ditch.  What we did do was as soon as we were stopped and ascertained that we were still alive was get out of our car and head to the overturned truck. There was a body against the windscreen and we were both..or at least I was…holding my breath until I saw movement. Dad was already trying to find a way to climb up the cab to help them open the door.
What seemed like an eternity later, two servicemen from the Army Airborne were on their feet in front of us. Another car had stopped by then and had called 911.  Dad moved his car up and made a lane using the shoulder. And we started directing traffic.
The whole thing was pretty fucked, to be blunt.
If we had been in the lefthand lane. Or if we had been 1 second later in our travel, we would have hit that truck head-on and there is not telling what would have happened or who would be injured. To be sure, it would have put a damper on our trip to the farm.
One second.
Think about that for a moment. I can assure you that in watching that truck flip in front of me with the full realization of what was about to happen—time slowed down. Everything was in slow motion.
One second felt like minutes at the time.
In remembering it now, one day later and thinking about what could have happened-one second feels like an eternity.
I’m not sure if it was our guardian angels, or those troops’ but whatever the case, they were busy. I’m glad they didn’t pause.

Even for one second.

Glad to hear that everyone is okay. That's crazzzy.