It's a little bit funny (this feeling inside?) no...but I was thinking (because that's what you do best, Butch) how quickly things that are completely fucked up become the normal. Not necessarily in general...but in my life. When acceptance of a situation was handed out as a coping mechanism, I think I was given a little extra. True to form, I'm sure I said 'huh...well. I suppose I'm meant to have that much extra of this shit, so ...let's have at it then.'

Maybe acceptance isn't quite the right word. But stuff that should bother me just doesn't. And I don't think that it's that I don't or won't stand up for myself. It's more that I just don't think it's worth getting upset over. I'm (relatively) healthy. I have a (relatively) decent life. I am able to write. You're able to read it. I jam and play music with my friends. And occasionally I have a nice glass of bourbon to wind down the evening.

It really is good.

I'm going to level with you. I'm not really much of a dater. I'm not what the coffee talk ladies would call dating material.  Perhaps its that I've been out of practice for over 13 years. Perhaps it's that I don't so much mind being a home body. The whole thing is just really awkward to me. I don't know what to say. I find it hard to be natural in that construct. Mostly because I find myself trying to tell myself to 'act natural,' which of course, is impossible. If I'm acting, there's no way it's natural. Even if I'm trying to emulate through my acting, what the 'natural' Todd is like.

The real Todd is quiet. I will watch. I will observe. I will smile a lot. I will laugh. I will yearn to have the natural conversations with someone that I see happening around me.

I spend a lot of time in my head. And, while that's great for the writing Todd, it's not so hot for the Todd that has to interact with real live flesh and blood people. I have a deep seeded need to belong. To feel that someone actually wants to be my friend. I know where it comes from. I know when it started, so there's no need to get all Freudian here. It's just a statement. I will find myself telling stories that I think are interesting or neat. Things that happened to me that were kind of crazy awesome or just crazy fucked up. And in my head I'm telling these because I think they are interesting. But really I'm telling them because if I think they're interesting, and you do too, then maybe you'll want to hang out. I have (over-)analyzed these conversations and stories later and thought to myself Holy fuck did I sound like a douche.

And then...because my mind can't really let go of anything before it takes it in to the alligator death dive, I wonder if people are just being nice to me because they're just genuinely polite. You know that thing where you weigh your friendships and you're all like I've got way more stock in the level of friends than they do. I don't know if they'd list me as a friend at all.

See what I mean?  It's a spiral.
So...if you ask me to do something that doesn't involve eating pizza, drinking beer, and watching Netflix...chances are I'm going to run a mental decathlon of what if's and 'do they really want me to show up's before I even leave the house.

The absolute cruelest irony about this whole thing is that once I actually do get out, I'm usually fine. I have fun. And I can usually just let go, shut off my brain, be in the moment. And then later I think to myself holy shit...that was actually kind of fun. I should go out more often.

And then the cycle has a chance to perpetuate.

Maybe this is normal? I don't know. Maybe our 'instant on' society has a part to play in this. Although, part of me has always had a hard time thinking that people wanted to be friends with me because of me. Look..I know it's fucked up. I get that. I'm not trying to defend it and I'm not saying it just so people can tell me how liked I am. I'm just saying....that there are times when I can't get the fuck out of my own head and see all the amazing people in my life.

And I'm sorry about that. When I hem and haw on making plans...please know that it's not you in the least bit, but it's really me trying to walk through the mine fields in my sub-conscious.

I'm sorry if I'm re-hashing bloggy blogs from days gone by, but this whole 'living alone' thing is really at the surface of my noggin these days.

And I'm pretty sure I know why. The book I'm working on has a central character who basically never leaves his apartment. And while it's not me....there's a lot of me in that character.  Maybe it's a metaphor for our society. We all have these areas that no matter how badly we might want to, we won't leave. Or maybe we don't want to leave them. Maybe we want to be isolated with the illusion now of being in touch.

I don't really know the answer, to be honest. But it sounds like I have a few more chapters to write.

After all, it's cheaper than therapy.

I leave you with a shot I took of a friend's pooch. I always smile when I see a shot of a happy dog.

Have a good rest of your day my friends,
-A.T. 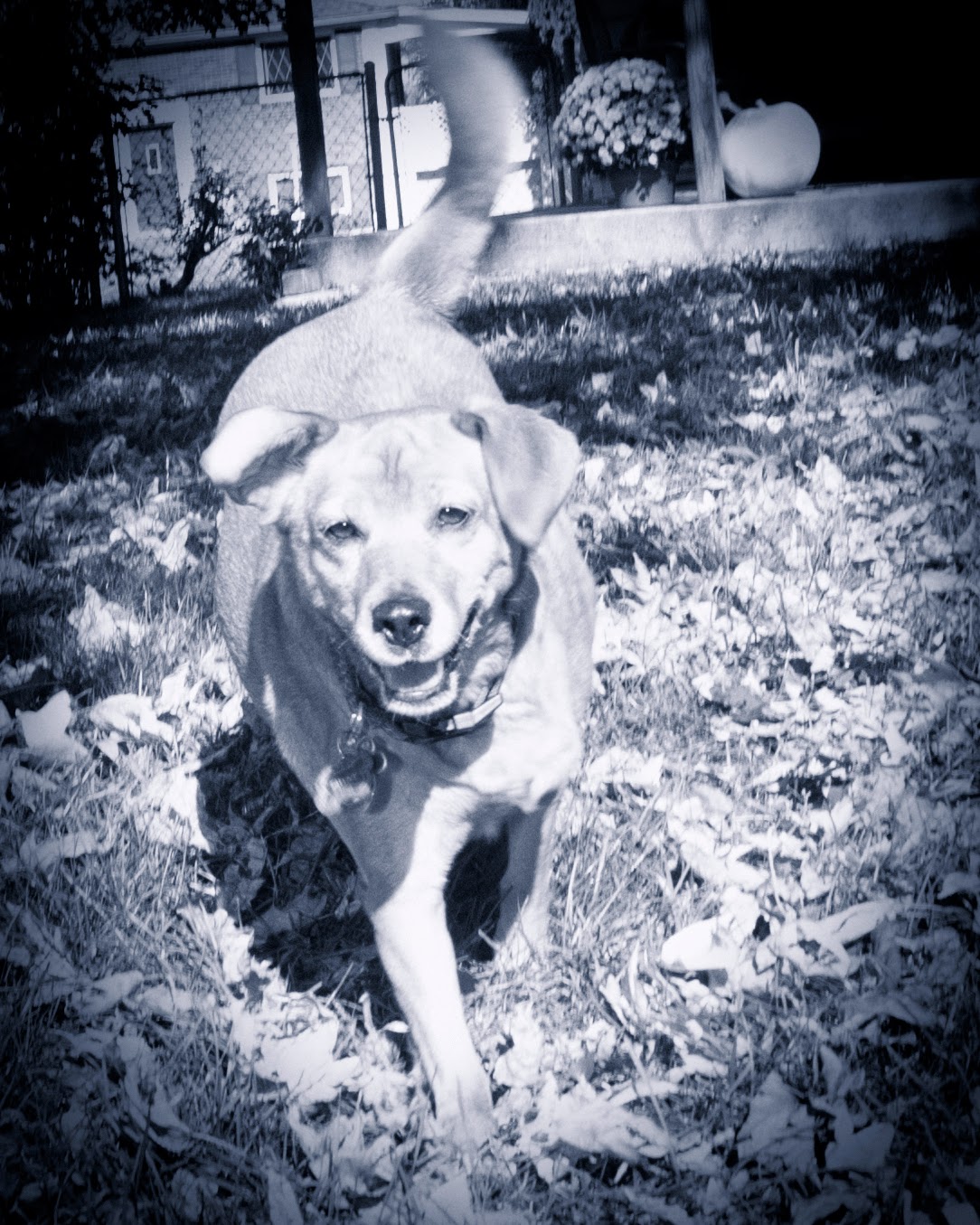