43 years is a long time to be asleep. And to be fair...I'm not completely asleep. And yet, there are times when the facade of this world holds on with such tenacity that I almost believe its real.

Case in point. Fight Club.  I finished reading it and instantly made a list of shit I didn't need in my apartment (or my life) anymore. The obvious target was the Blu Ray movie 'library' that has been sitting in the corner gathering dust. 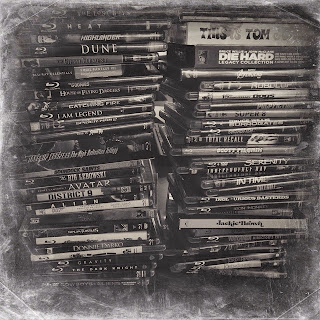 That's the stack of what they bought. The money I received from the disks was put to better use than pieces of plastic sitting idly by. They sent me home with about 6 of the disks I took. But of course there was about 20 movies...OK 40 (20 on Blu-Ray and 20 or so on DVD) that I talked myself in to holding on to. Because..you know...they meant something to me. And who knows. Maybe they do. Or maybe that's the illusion of this world not willing to let me walk away from abject consumerism.

There is not one single movie on that shelf that I needed to buy. The library lends DVDs and Blu-Ray disks out to cardholders for free. FREE. And if I go and they don't have the movie I want to watch, so what? I still got in a good walk to and from the library and maybe I pick up a movie I never thought about seeing. Or who knows? Maybe I pickup a book?  I don't know. To be honest, I just renewed my library card online tonight so this whole walk to the library to get a movie thing is kind of a proof of concept at the moment. But in theory it would be a good thing. There's a strong chance that I'll take the rest of the movies in  this weekend and complete the purge. That's what Tyler Durden would do. And I'm ok with that. Minus the lye kiss on the back of the hand, that is.

I guess that's the part lately that's been bugging me. The passiveness. Content delivered to every connected device we own. And the funny thing is...selling my record albums isn't an option for me. They aren't the same kind of devil that the movies and the TV represent. When I have a record playing, I am still free to create. To do something else. The music engages me on a deeper level. The level beyond obvious thought. I play music while I write. While I do the dishes. While I read a book. While I pay bills. While I file my taxes. Sometimes it's background, sure, but almost always my subconscious is absorbing it on a deeper level.

When I'm watching TV or a movie or whatever, I'm engaged in that. And engaged is misleading. Focused is a better word. I have to focus on that content. The story. The dialog. The images. To split attention from that is rough. It's like a part of my brain won't let me disengage when the idiot box is on. It's much like the illusion of this world. Crafted in such away that your focus...your vision. This massive vision capable of imagining dimensions beyond sight and sound is trapped in to focusing on this tiny box. This small patchwork square of fabric that represents an infinitesimal portion of the universe. The TV is the metaphor for the trappings of this world. This life is very much just a TV show (or one big commercial). Why is it then that so many of us have become passive observers in this show? Oh sure...just like the TV world, there are those in this universe who write their own shows (and even the shows of others). But most of us are content to sit back and watch. Dial up some microwave pop corn while we watch the latest episode of fear tearing down the house that love built.

I think I'm going to go back to my policy of only watching the TV certain days (or ever just one day) of the week. If I catch up on my shows, great. If not, at least the rest of the week was fulfilling.  I know that this won't be easy.

But I'm equally certain that it will be a vital step in releasing the person I was meant to be.

Stay tuned to see what happens next !