Surgery was this past Monday. That was Day 0 (as I think I may have covered elsewhere, if not-it was at least a nice chat I had with a dose of percocet somewhere along the way). It is now Day 5.

Today was the first day I woke up where there was no pain. Not just a little bit of pain. Or a lot of pain. But no fucking pain at all.  I felt it after I was up and moving around for a bit, but for a blissful 10 minutes on July 4th, 2015, I actually remembered what it was like to wake up and not be in any kind of pain at all.

Yesterday I had it in my head that today was the day I would switch to the Tylenol. A walk or 3 today has convinced me that it may not quite be the day for that.

But dude. No pain.

So here's where shit gets hinky. Sorry--Netflix has every episode of NCIS streaming. Which...I have to say is about the best thing ever right now. Not that it was a great show, or groundbreaking in any way what ever, but the fact is--it's a show I enjoy and something that is very easy for me to zone out of when the warm fuzzy blankie of pain-med induced naptime falls over my face.

Where was I? Oh. Right. Recovery.

2 weeks after surgery I'm not allowed to drive. Surgery was on 6/29. The soonest I see the doctor for follow up is 7/14.  I'm on FMLA, so I can't actually remote in and do work (although to be fair that urge only struck me once in the past week). And that's ok. This is Me time. At least it should be.

But I'm not going to lie. There are times when this feels like house arrest. As though I expect to stumble across the hidden camera placed by the scientists studying me.  I'm going slightly stir crazy. I can't drive. I can walk. And am encouraged to do so. And I have been taking walks.

I went Uptown today with every intention of watching the Parade through Westerville. But as I was walking around I was struck by how self-absorbed everyone was. The only thing that mattered was their little group. And staking out their area to watch the parade from. And I get that. My concern was--I am not 100% at the moment. I can't react quickly. I can't turn quickly. My peripheral vision is for shit right now because I'm not supposed to bend or turn my head. Leastwise, if I do either of those things, I'm not supposed to do either of them in any fashion that would be construed as 'quickly.' Even now, while typing this, I am moving my head and body at intervals.  All that to say that I don't trust people in crowd situations. The sidewalks were too crowded for my comfort and at 45 minutes until the start of the parade, I could only expect them to worsen as the parade start time approached.   Instead of taking any chances, I ducked in to my neighborhood pizzeria and ordered a small pie and a couple of tacos to go. By the time I got home, I couldn't be sure if the sweats were due to nerves, the heat, the roids I had just finished taking this morning, or a combination of all of the above.

And I think this is where people fuck up.

Affects of the anesthesia, steroids, and general malaise caused by the opiates I'm on, taken in to account. All things considered--I feel fucking fantastic.

And I'm home.  And I've got shit I want to do. Like clean and organize my second "bedroom." Not being in pain, I can genuinely say that I feel like I could tackle that project.

Because I can't bend. Or twist. Or lift or carry anything greater than 5lbs.

Five fucking pounds. Are you kidding me? My bowling ball is 16lbs.

My camera bag that I keep my instant camera in (along with 4 extra film cartridges and a second battery) is three and a half pounds. Five pounds is less than 3/4 gallon of fluid.  Don't worry, I split the jug of distilled water in to two containers before the surgery so I would be able to fill up my CPAP machine on my own.

But I know now why people fuck up doctors orders. Why they try to do to much.

The walks help. And I see myself taking more of them. If for no other reason than to get the fuck out of here. I'm going to work my way up to walking to the library. I figure the iPad mini in the Clam Case should weigh less than 5lbs and I can take it to the library and maybe do some writing. Sounds like a plan anyway.

Don't worry. I have no plans to countermand the doctor's orders. But fuck, I tell you what, man, I can certainly see why that happens.

It's insight. The last time insight hit me this strong it was when I was on the Rock and Roll Fantasy Camp Tour.

Sometimes you tell the day, by the bottle that you drink. Sometimes when you're alone, all you do is think....

The insight for that line came from being on a tour bus following a rock and roll band's tour schedule. It went a little like this:


It was about as surreal as it gets. By the 3rd day of a 6 day trip, I literally had no idea what town I was in. So...I totally get the whole imagery now.

And this isn't quite that bad. Except that it is. The names of the days of the week have no meaning to me at this point in time. People have come by to see me. I still don't really know what day it is.  I watch programming on a streaming service so little things like 'this show only airs on Thursday nights' don't really apply.

It's not prison. And I know that's a bad analogy. Because I can walk around. But I can't drive. And to have that mode of transport taken after it has been a staple of my life for 25 years is kind of fucked up. I feel very limited because of that.

Again, I can see someone getting to this point and getting angry. Angry with the doctor for limiting them. It is at this point, if I had no common sense that I would be getting in to trouble. I would be all 'fuck this--I feel fucking GREAT!!! Why should I wait another 10 days to drive?!'

Only I have common sense. I waited too damn long for the day to come along where I could wake up and not know pain.

Have a  safe and fun weekend my friends! 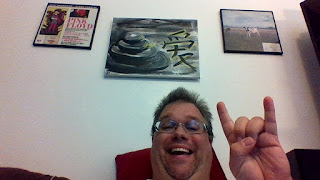