Went to bed last night about 1030. That's 2230 for those of you on 24hr time (I've recently switched to that on my time keeping devices because, well, it's simpler).

Woke up about 630 this morning. I slept through the night. I only woke up once when I realized that I was about to put my arm above my head. Don't ask me how I knew that in a dead sleep, but apparently I did.

After a few minutes of just laying there and collecting myself, I did the log roll up to a sitting position. Took a quick assessment of the pain and realized that I didn't really feel any. There was a bit of aching...feels more like a bruise than anything--in my shoulder (posterior, near the right shoulder blade).And no pain from around the site of the incision.

Mind you...today is Friday. The surgery was Monday.  It may be too early to call it a success yet, but fuck if it doesn't feel like one!

The no bending and twisting is hard. And to be honest, I'm doing the best that I can, but I haven't quite settled on a way to wipe my ass that doesn't involved bending or twisting...so...there are some minor concessions when I poop. Which...yeah...I've pooped a couple of times since Monday, too. I know it doesn't seem like that big of a deal--trust me--it is.

Sleeping through the night was kind of huge, too. I did some walking yesterday and this morning. And I think I'm going to go to the parade tomorrow, too.

It's all a but surreal. Try walking city streets without bending or twisting. I feel like a  robot that has no neck articulation--the whole upper body has to turn. Much like a body builder who has roided out his neck to the point where his head looks like a fat grape on his sinewy shoulders.

What's funnier to me than all of that is how invisible I felt yesterday.  The incision is apparent. And I am guessing that to a casual observer, it looks like a really bad shaving accident or an after school special gone wrong. But if you are holding a phone anywhere near your face, you become invisible. Obviously with the no bending edict, it makes it tough for me to assume the proper 'cell-phone-engaged-disinterested-in-the-real-world' position, but I can get it close. And just like that, you become invisible. Whether people think you're engaged in your own world or not, that's the one piece of hardware that makes you practically invisible.

I got my malt from Graeter's. Have you ever tried to order from a place that has signs like that without looking up? Not so easy. Luckily I knew what I wanted.   Malt in hand, I did some more walking up State Street.

This morning it was a similar route.

I got up...mostly pain free. Threw on my birthday suit and headed to the shower.

Showering. Again quite the chore with the no bending and twisting. I could make a joke about not being able to lift 5lbs either, but ....yanno...I'm not completely fucking vulgar (all the time).  And warshing my hairs.  I'm not supposed to engage in anything that is considered overhead activity. Which is really kind of a bummer since I've been looking forward to practicing my throw-ins on the pitch. So...yeah...shampooing is kind of a fun little dance with the shower head.

After the fun aqua-antics, I got dressed. Turning one of my t-shirts in to a v-neck a la 80's valley girl style. And some shorts and the treaded footies.  Grabbed a few bucks and headed for my walk about.

But what about those sexy white anti-blood clotting stockings you're supposed to be wearing until the 14th?

The walk to Schneider's this morning was good. I got a couple of glazed and a couple of chocolate iced-cake donuts. Along with some chocolate milk. And a bendy straw I just happened to remember to throw in my pocket.

Oddly, though, the chocolate milk didn't taste very chocolaty today. Not sure if it's the drugs I'm on for the pain or if something fundamental has changed with chocolate milk. It tasted very much like regular milk with only the slightest hind of chocolate for coloring.

Still sore when I swallow. I suspect that will be the case for a while considering what they had to do to to get to the spine.

I can't tell yet if it's affected my speech or not. Which is to say whether or not I'll have that kind of sexy raspy thing going on all the time or if it's just a temporary thing until my throat stops being sore.

Alright...I'm good for now. I need to get up and walk around about.  Here's one for the archives: 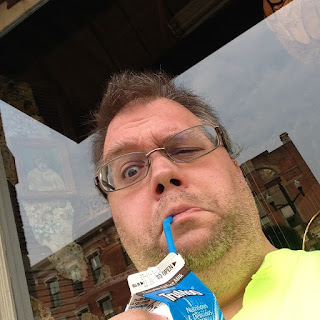 Have a kick ass Friday my friends. I'm sure I'll be around soon!

Glad to hear that things are coming along nicely. Just keep doing what you're doing (ie doing what the doc told you) and you'll be better in some time ( since we know "no time" is unrealistic :-)