I had my first post-surgical follow-up today. While it was pissing the mini-monsoon on Central Ohio this afternoon, I was in a waiting room. They took an x-ray of my neck and dropped me off in the waiting room.

For about an hour.

There's a lot that an imagination like mine can think of in an hour.  And it always starts with What in the world is taking them so long?!?

It just goes downhill from there.  Maybe they saw something bad in the x-ray. And so on and so forth.
It was a fun little diversion, though, when my thoughts spun around to the miracle of x-rays. And by miracle, I mean that somehow, someone figured out what was "safe and acceptable exposure" to a concentrated beam of radiation aimed, in this case, at my neck.

That was good for a few minutes.

My boss texted me a video clip of the monsoon I was missing outside. And I did a little parenting by phone.

If I had thought ahead I would have put the iPad in the case with the keyboard and got some writing done.

The doctor came in. Took a look at my chart. Took a look at the x-ray. Introduced the high-schooler shadowing him. And talked a bit about cutting the little knot of suture that was still poking out of my neck.

For whatever reason, he decided not to cut it, or "tug at it and make it hurt" as he put it. Thank goodness those doctors take that hippopotamus oath about not harming people first.

He wrote up the orders for my Physical Therapy and cleared me to go back to work.

He declared that I was the poster child for post-surgical recovery success. Or something along those lines. I know that all of those words were there, but I'm a little fuzzy on the order right now.

Dad and I had a nice chinese lunch (that I'm still burping up, btw). After which, he dropped me off at my place. After a quick bio-break I made a shopping list and grabbed the car keys.

You bet your tuckas! I was cleared to drive again.

Dude. It feels amazing. I had only had Elliot for about three weeks when I had the surgery and in those three weeks I had actually started to enjoy driving again. So to not be able to do that for two weeks after the surgery sucked big ones.

I'm just still...giddy...high...relieved...happy... I really don't know the right for it (which, granted, makes me a rather piss poor writer at this point)..all the same--it fucking rocks.  (Sorry Dad. It seemed to fit the sentiment).

Ladies and gents..I give you my new neck. Or rather my existing neck with a couple of upgrades. 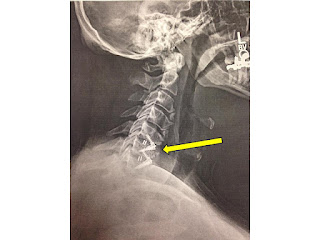 The arrow pointing to the two alligators eating sideways equal signs are where the upgrades were put in. Basically my disks were removed and 'appliances' were put in. The alligators are actually titanium screws (3 per) that are going in to the adjacent vertebrae. It's a newer type of fusion. Supposed to promote quicker recovery, less invasive, et cetera et cetera.

Anyway...I'm stoked. I feel like things are falling in to place. Just 4 weeks of PT (paid torture) and I'll be right as rain.

Have a kick ass evening my friends!