I think it's pretty much established that saying 'you're taking a break from Facebook (and/or social media in general)' is the adult equivalent of when we were kids and we would threaten to run away.

None the less, I am doing something of the sort. I'm not running away. But I am dialing shit way the heck down.  No, I'm not quitting Facebook. Unfortunately, I think it's so intertwined in our society that to walk away from it completely would label me some kind of cyber-pariah.  Which..to be fair, probably wouldn't necessarily be a bad thing at this point.

However, I'm taking smaller steps. I've removed the the Facebook and Facebook Messenger apps from my mobile devices. I find that it's much too easy through the course of the day to just reach down for my phone and 'just see if anything new has been posted on Facebook,' and then 30 distracted minutes later, I find that I'm hitting refresh to see if NOW there's anything new.

I've got too much that I really need to focus on. Ok..not necessarily quantity wise, but quality. As in quality of life.  If I'm going to earn my er  (go from someone who writes to actually being a writer) I have to limit my distractions...or at the very least focus them. Same with the writing. It needs to be focused. I find that I'm getting sucked in to the imaginary lives of "friends" who actually may or may not be friends.  I look through Facebook sometimes and think If I had to write these people a letter by hand, address and stamp the envelope, and mail it--how many of the people on my Friends List would I actually consider taking the time to do that with?  It's a short list. I'm just being honest. And you should be honest, too....if you got offended by that last thought, ask yourself, do you really want to get a letter in the mail every day-multiple times a day- telling you the glossiest points of someone's life? Random pix of their children or fur babies? Oh sure, maybe at first. But then it would just get to be old hat.  The letters would stack up until you found a couple of hours to read through all of the letters. And by then, the information is out of date or you notice that there's a very clear pattern of the kinds of letters you read from certain people.

The same holds true for the actual book of face. The difference, I think, is that technology masks the bullshit.  Yeah-it's fun to catch up...and to keep in touch with people. I just laugh when people say "It's the only way I have to keep in touch with so and so." No it's not. Postal service is still a thing. What you mean is it's the easiest way to keep in touch. And it's equally as easy when someone asks you, "Did you see my post about such and such on Facebook?" to say, "Why no, Bob. I didn't. But you know, that Facebook feed is so messed up these days...I probably just missed it."

Meh. I didn't mean for this to turn in to a rant. And I suppose it's just some empty venting. Or perhaps the groundwork for a character study of someone who was completely alienated by emerging tech and started to go the other way. We'll see.

For now, I'm out. Off to a photo shoot.  I'll answer in advance...no. I didn't get your facebook message. And no, I probably didn't see that post on facebook. And now in the ultimate hypocritical irony of a move, I'm going to go post the link to this on Facebook. Heh. Yeah. I get it.

Have a great rest of your day my friends. 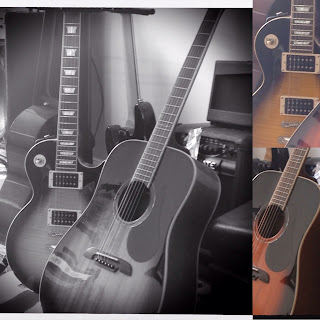