The Treachery of Rainbows

I drove home yesterday. It was a long day. Up at 4:30AM. In the office by 6AM.  Left at nearly 5PM.
The busy season is fast approaching for my team. We support 25 retail locations. And 3000+ employees. So, I know what to expect. The long days are just part of the job. Nothing more. Nothing less.

As I was leaving yesterday, it was raining.  My favorite kind of rain is a spring thunderstorm when I'm sitting on the front porch at The Farm.

This was not that rain. This was the cold, wet, screw you for still living in Ohio instead of moving out  West years ago kind of rain. As I was leaving, I saw it. 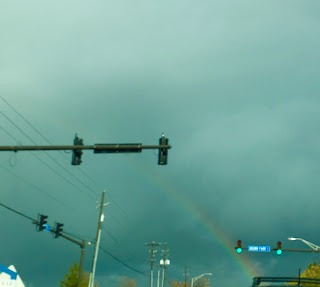 You'd be wrong. I'm not going to go so far as to say rainbows are evil. Or even that that are malicious. But they DO have a mischievous side about them.

Coincidence?  Maybe. But I don't think so.

I think it was the rainbows. You see, the rainbows know  that people want to see them. I personally shot something ridiculous like 12 pictures of them with my phone...as I was driving...on the way home.

Yes. Yes I know that's stupid. And Yes, I know that the only time that's really allowed is if it's some really jacked up bumper sticker or decal...or KITT from KnightRider...or the Trans Am from Smokey and the Bandit. (Previously, the General Lee would have been on that list, because it was a nostalgic piece of my childhood before I found out that the KKK was actually behind the whole show).

But dude. It's a rainbow. So I just had to take pictures.

As did, I'm guessing, the people who got in those accidents I saw on my way home.

Oh, I suppose it's possible that they are just bad drivers. After all, it IS Central Ohio, and there WAS some moisture in the air. And that is when people tend to lose their shit whilst driving. 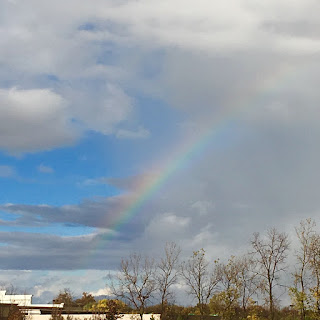 I mean, even if the 'double rainbows what does it mean' guy wasn't tripping balls (and I'm totally guessing he was), there is still that sense of mystery and wonder evoked when a rainbow appears.

Oh yeah. I know the science behind why they appear. And so do they. That's why they do it. It's like the rainbow just knows that there is sunlight AND rain...and suddenly there they are like "boom! Science, bitches!"

So...we do stupid shit. We take pictures while driving. Or stare wistfully at this color pattern in the sky that is ALWAYS THERE, but only appears at the moment when it becomes the most treacherous for us to stop and look.

By the time I get on the freeway, I was totally enamored with those prismatic pariahs and then...as though to keep me from completely dismissing their colorful prankery, they turn it up a notch.

"Oh hey there AT. You need more proof that we're awesome? Here you go. Have a look--we'll ride along with you. But we'll lead you IN to the rain. And if you want that perfect pic you're going to have to manipulate your phone, the wipers, steering, and pay attention to all the other vehicles around you. Except for the ones we've already driven in to each other. Those are ours." 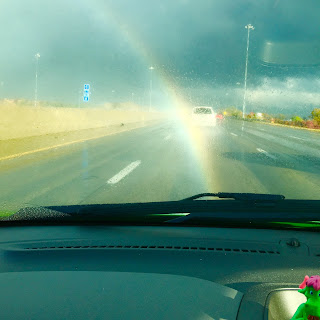 And, apparently a Honda MiniVan is roughly worth a pot of gold. I mean, it has to be, right? Because it was at the end of this rainbow.

That or leprechauns drive mini-vans. I'm not entirely sure what the takeaway here is.

Other than the fact that I'm pretty sure rainbows just like messing with us.

As soon as I got home, I hid me lucky charms.