The Role Of The Roll

The weekend of epically awesome things continues.  Today I drove north. Out of my little Uptown apartment and a little out of my comfort zone to attend a workshop in Ashland, Ohio.  The workshop was hosted by a very talented group of writers and creatives that I met earlier this month, the North Central Ohio Writers (check out their Facebook page here).

I like D&D. I like to write. And I liked the folks I'd met from the NCOW group. Seemed like a no-brainer.  There was a brief moment of panic this morning where I thought I might have actually slept through my alarm and shot my window for the 80 minute drive. I would have had to given it some serious thought at that point--anyone who was late was automatically relegated to creating a Bard.  I'm thinking this makes more sense if you play D&D. Suffice to say, I didn't want to be late.

On the drive up I started thinking about the topic. Linking character creation in D&D to other writing wasn't quite the straight line that one might think.  The multiverse of Dungeons & Dragons has had 30 years to evolve. Character classes, racial traits, backgrounds---heck all manner of minutia has been developed over three decades to craft one of the most amazing role playing universes in the world.

Character creation in the gaming system starts as a very mechanical process. Six major attributes are populated with the results of rolls of the dice. There are twelve major classes of characters. Each has strengths and weaknesses that can be cultivated depending on the strength or weakness of the numbers rolled on the dice.

Thinking to my own stories, I currently have nothing written in which I have a monk, paladin, warlock, ranger, fighter, or any of the other D&D classes as characters. How the heck was this going to help? It wasn't like I could just roll the dice and build some magical awesome character for my particular flavor of writing--or was it?

These thoughts were playing Red Rover in my brain bucket on the drive. When I got to the Ashland Public Library, I was greeted by happy faces. Some familiar, some new to me. I was greeted also by the smell of stew. As well as some delicious eggy potato concoction.  I knew the drive was worth it. I'm a simple man and food works. Add tasty food to my ability to get a D&D fix, and you've just added another notch in the belt of an already awesome weekend.

Things got underway and the character creation was in full swing after a brief discussion of the different types of classes available in the game. As I had played a couple of them, I spoke up and filled in some of the details of the classes in question.  And then the room became filled with 20 people rolling dice and the furtive sounds of pencils and erasers dancing wildly on the pre-printed character sheets.

I left my class and race to the whim of the dice and wound up with a Half-Elf Warlock named Bob Hooper. As I started plugging numbers in, I noticed something.  Within the Player's Handbook, which on first blush seems amazingly thorough, there was an underlying message.  The designers of the game were genius. At its core, Dungeon's and Dragon's and the scores of RPG (both tabletop and electronic) that followed was one simple truth from the creators: We have given you the basic constructs of the game...how you tell, live, or play the story however is completely up to you.

There was the tie-in for me. The a-ha moment, if you will.

Within the worlds we create as writers, there are some basic constructs.  Grammar...patterns of thought and speech. Mechanics of getting the story crafted.

Everything else, though, is wide open.

One of the best moments for me today was not creating my own character (although he's going to be fun to play even if he is a squishy 'caster). No, it was helping someone else. One of the participants was sent over to me to help fill in the character sheet (there are a few who know me that will laugh at this considering I second guess myself all the time with those damn character sheets).  She was building a Ranger and had her base rolls done, but had some questions about how to build her character beyond that.

I was flustered at first--flipping through the manual and trying to figure out how to calculate certain items, then I took a step back and we talked about the story a bit.

That's the key. Once you plug the numbers in, you can't actually play with your character until you create its story. Where did they come from? Why are they the way they are? How the hell does a Half-Elf have a name like "Bob Hooper" and is there really a place called the Straits of Sessymia from which he hails?

There's the hook. The same energy and process that goes in to creating that character's life are exactly what will help develop characters in the stories each of us are writing.

Like life, in the creation of our characters there is always more than just a roll of the dice. 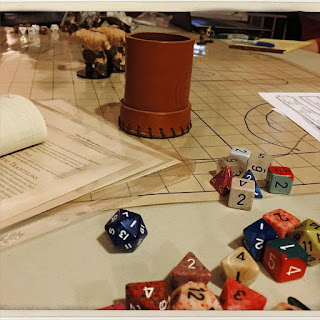