Dick Magnet
I have come to the conclusion that as a society, we suck as humans sometimes. I think men are a little higher up in that ranking. I realize that as a member of our species that has a penis, I am lumping myself in this mix. And that's OK. I'm an asshole and a dick sometimes. I will readily admit this.  But, as of late, I've had a couple of things happen that give me pause and make me think about the way people treat each other.

The first one was an incident that happened a few weeks back. I was on my way to a meeting of the writing group I belong to and was at a traffic light. I was in my patented powder blue tuxedo t-shirt and had on my Pabst Blue Ribbon trucker's cap, as ya do.  Window was down and I was probably jamming to either some old school hip hop or one of the dance stations on XM.

Perhaps it's the bright green car. Or the fact that I'm singing whatever I was singing like I didn't have a care in the world. I can't be certain what caused the next series of eye-popping events to unfold.

An orange Mustang pulls up to my left at the light and I start hearing whistling and cat calls. I look in my mirrors to see if there is a car of women anywhere around that might be the cause for this.

Now...there's a few things that troubled me about this in retrospect. The first being that my first reaction was to see if there were any women around that might be the object of these rather misguided attentions. As if that kind of abhorrent behavior should only be directed toward women.

The second is...as soon as I realized it was directed at me, I became very uncomfortable. I didn't want to make eye contact. I looked at the light...staring at it. Willing it to change from red to green so I could speed away.  I felt disgusted.  There were a couple of reasons for this. The first was the straight up objectification that I felt. I didn't feel flattered or complimented. I felt gross. I felt like to even acknowledge their calls would be to make me as slimy as they were. It was a terrible sensation that I hadn't felt in quite a long time. The second reason for the disgust was the fact that all over the country, maybe the world, there are people treating other people this way. Not just men being assholes to women (although that's likely the largest demographic), but people treating other people as objectified pieces of meat.

I'm gonna start this bit off with a pic of a text exchange that I had. 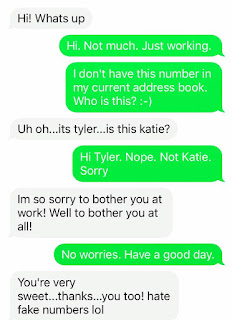 So being a writer, I have already thought of the circumstances behind how Tyler got the wrong number.  He was out. He was hitting on a woman who said her name was Katie.  He asked for her number in what I can only assume was a smooth lol kind of way that the kids ask for numbers these days.  She didn't want to be completely rude (a free drink is a free drink). So she gives him a number. Maybe one or two digits are transposed. And voila.  Tyler thinks he's a stud. Katie gets her drink on. And the world keeps on spinning.

A couple other options. Maybe Katie wrote it on a napkin. Something caused the ink to smear. Tyler sucks at reading smeared ink napkin phone numbers. Now Katie is pining by her phone wondering why that cute bearded man with the too-perfect flannel hasn't called or texted. I mean,  they had a riveting conversation about the over-inflation of IBU percentages in pseudo-microbrew IPA's. What the hell, Tyler?!?

Regardless of how Tyler got the wrong number, intentional or accidental, he had it.  And Kudos to Tyler for finding a silver lining. He assumes he was given a fake number.  And he assumes I'm a female. I didn't respond to his last message and he followed up an hour later with a message that said 'Text Anytime!'

While I applaud Tyler in that regards, I'm also a little skeeved out by it. Because...dude...you thought you were texting one chick. You realize you aren't and now you start the ball rolling with what you think might be another chick.  I really hope this doesn't escalate. I really don't want to reach for my phone and find a pic of Tyler's man berries. Because, again, men are stupid. Now..don't get me wrong...I'm not saying that I've never had exchanges like that before, but I have always made sure such exchanges were welcome. Either way it makes me weep a little bit for humanity. It's like...well, you're not the chick I was hoping for, but maybe just maybe you'll do.

Sorry Tyler, that's not how I roll.  Although, I'm not going to lie, I am going to be intentionally obtuse a little while longer just to see what happens.

That's the best part about being a writer.  Everything...literally every fucking thing that happens in my life is fodder, inspiration, or motivation for a story.

And we all know how I love to spin a good yarn.

I wonder if Tyler drives an orange Mustang.

Oh, my dear, sweet innocent Todd. This happens to me all the time. It's not terribly uncommon for me to receive dick pics from people (men) I've never met in my life, but it's slightly more common to receive texts from people (men) who pretend like they've gotten a wrong number, and then try to turn it into a conversation/pickup attempt. It's one of those things that happens so often, I couldn't begin to think of a number of times. Just a fact of life, like ... I don't know ... thunderstorms. You never know exactly when it's going to happen, but you know for sure that it will. Repeatedly. There was never any Katie. Just a sad little man child. Welcome to girl world, Todd. It's a scary place.

Ashley,
Scary and a little sad. People suck sometimes. I guess I'm still trying to clean off the rose-colored glasses of my youth to see if they still fit sometimes.

I can't say I've ever received a dick pic, and cannot imagine a place where directed misogyny would ever be acceptable. Women are the most beautiful of God's creatures, and I see them as above equal to any other.

That being said, I see this Tyler ideology a little different. I do still have my rose colored glasses, and I insist on always trying to see the best in any situation. Perhaps an embattled Tyler had FINALLY worked the nerve up to talk to someone at his Church or work environment after months of turmoil and stress from his social awkwardness. Katie, in her flowing yellow sundress and ocean blue eyes, simple disregarded Tyler, knowing she could never be interested in someone of his stature. Unwilling to embarrass him, however, she takes the easy way out, and simply provides herself a quick way out of a situation she has dealt with way too often. To Tyler's dismay, he reaches out to you.

What if it HAD been a female, one whom herself doesn't feel comfortable in the throws of large gatherings? Perhaps the most wonderful type of relationship begins to bud, one that Katie can only hope to find in her petty existence. One that spawns a love affair that changes cities and conquers mankind's iniquities. What if, by his only other moment of courage by saying "You're sweet...", healed a chasm left in a new boo's heart.

Please let Tyler down easy. I have so much hope for his tortured soul.