The Rise of Relevance *Amended*

I have said many times in previous posts in this here bloggy blog some of what follows, so apologies for the seemingly rant-like nature of this post, but it ties in somewhat with one of my works in progress.

The piece I'm working on is called The Treachery of Rainbows. It will likely be classified by some as dystopian science-fiction (but like most authors, I think there's a deeper message in the piece). In it, citizens are connected in most of their waking hours to the feed. The feed is tailored for their likes, dislikes, friends, and family. It provides news, entertainment, employment opportunities, and social engagements.  It's not a stretch to see what kind of technology in our current lives inspired this. The concept is fairly straightforward. What would happen if Facebook (or some other social media) became such a part of our everyday lives, that it was-in essence-Big Brother?

I thought, as I started it last November, there's no way this could actually happen. Would we, as thinking rational citizens, allow something like that to consume us and direct every facet of our lives?

What scares the hell out of me is that after the last 72 hours, I can see how it could actually happen.

As a society, we have already made social media far more relevant that it should ever be (in my opinion). It is fueling the feelings of instant gratification that pervade our society.  I think as the age group decreases, that expectancy of instant-gratification and entitlement increases.  And maybe that's the effect of aging. Maybe older generations always see that in their young.

I think, though, this is different. My generation is the last generation that knew life before the world-wide web and instant-on access to the internet in general.  The definition of patience? Waiting for that 2400bps dial-up connection to make the handshake and connect up to Angel BBS, or Prodigy, or CompuServe.  And praying no one else in the house picked up the extension while you were on-line.

These days, that world is in our pocket. There is no dial up. No patience. No hoping that someone in the house doesn't decide to order a pizza while you're trying to download that swimsuit gif for the next 2 hours.

I think our social media landscape is breeding an air of 'I'm important. And the more likes I get on this post, the more it will be relevant.'

It's Facebook. The site that was created to be a way to pick up co-eds on a college campus. The site that has since evolved in to one of the most sophisticated data collecting tools of our time.  The NSA doesn't have to track your movements from your cell phones (which they can, I'm sure do)--you tell them exactly where you are and who you are with. Hell, most of the time we tell them what we had for dinner. It's frightening how much information we divulge on Facebook.


And so much more. I'm not picking on anyone with the above list. All of the above is shit someone could learn about me by spending no more than 30 minutes on my Facebook page. Hell probably ten minutes.

But Todd, we use Facebook to connect with friends and family across the country and the world. It's a great tool to stay in touch.

No. I would argue that it's not a great tool. I would argue instead that it's a convenient tool.  Certainly browsing a friend's wall on Facebook is a quick and easy way to stay involved or see what's going on in another person's life--if they want you to know about it.

Facebook is, in most cases, the ideal version of someone that they want the world to see. It's not real. And when it is real, people get nervous and uncomfortable. It's the reality TV of the internet. It seems like you know what's going on in my life. But if you call me, or heaven forbid--write me a letter, I can guarantee you that the reply you get back will be more raw and real than anything I've ever posted on Facebook. I want people to like me on Facebook. I don't think I'm alone in that. No one likes to think or get indication that they are assholes.

And that's the other downside of social media--the Keyboard Conquistadors. People who will sit and shred someone simply because they don't have to actually see the effect in real life. There's no room for actual conversation or growth.

Case in point.  I posted a quote the other day about the 2001 movie "Pootie Tang," written and directed by Louis C.K.  The quote was the bit about the gorilla killing Pootie Tang's dad in the Steel Mill. I thought it was funny. I posted it. In quotation marks. Because the absurdity of the context of the quote made me laugh.  A friend commented...basically throwing guilt my way and asking if I really thought that quote was appropriate at this time.

Took me a minute before I figured out that he was referring to the incident at the Cincinnati Zoo. The two were completely non-related. But because I had the word gorilla in my quote, it was enough to get a dose of Facebook shaming.

I almost never take down something I post on Facebook. Except the time I accidentally posted a...well...I mean I almost never delete a post.  But I deleted this one. Not because I thought I was wrong, but because I have met this particular friend in real life. He's a good guy. And I don't like the thought of hurting someone.

And then today I see he posted something about the Cincinnati Zoo having a dead horse.  And I thought to myself, "well, I guess it's ok to start making jokes about this now. The pendulum of people giving a shit about this has shifted the other way."

That's really what it is, though. We have chosen when something matters, when we're going to be bothered by it, and when it's just over and done.  It's a false sense of relevance. That used to be delivered to us on the nightly news. The news cycle was spread out. Networks had to pick and choose what was important to their viewers or readers. That's what we saw on the nightly news or in our morning paper.

For example, I hadn't really followed the story of the child that climbed in to the primate exhibit at the zoo. Therefore I had no filter when I posted about a gorilla.  But it was important to my friends. So I became the asshole.

Now people are done with it.  It's all so crazy. The truth is, nothing on Facebook is relevant. It's a false sense of importance. You are not going to save a sick child by clicking on the 'like' button. Nieman-Marcus is not going to give you their chocolate chip cookie recipe (hint: the recipe on the back of a bag of Nestle's Toll-house Morsels is the only chocolate chip recipe you need), and Bill Gates is not going to give you $1000 for forwarding an email.

Facebook is a tool used to collect data for companies to market their products and services to you.  The rest of it that you might feel (the staying in touch, the coordinating of events) are things that have been incorporated to help ensure that it stays a relevant part of your life.

And it's working. We're all on the feed.

I guess I need to get this story done before it stops being science-fiction.

Well, that, and my lunch is over. 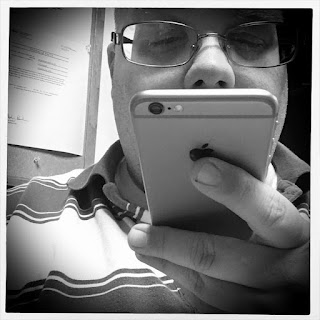 So...interesting turn of events. The person that I thought was offended by my original quote actually wasn't offended. But..given the headspace I was in at the time and this little crusade I was on to vaguely call him out on my blog...because you know...we sometimes hide behind keyboards and bust peoples balls (seriously...weren't you paying attention earlier??).

The reason I was so bugged by the whole exchange was because I thought I had offended someone I considered a friend.

The reason he called me out was because he wasn't offended. He actually was worried that my comment might stir up a shitstorm from others.  And because we have mutual friends, he called me out because, well, I was kind of a dick about it. No...I kinda was. Seriously, scroll up. And I made it seem like he was crying about my post.

" Only the third time a man had been mauled by a gorilla at that steel mill..."

It's not a remarkable line, by any means. And any other time, it would have died a gloriously unspectacular death on my (or probably anyone's) Facebook feed.

But I took exception to the comment. Thinking I was being guilted or somehow shamed for posting it.

To be clear. I wasn't. I talked to my friend and we cleared it up. And shit is cool.

And I quote, "I just didn't want people thinking I was crying about your original movie quote.  Truth be told, I don't know shit about kids or gorillas and it doesn't affect my life at all."

Which...if you think about it, goes back to the point of this whole thing.

One throwaway movie quote + One comment of concern mixed with a healthy dose of misinterpretation=something that got blown way out of context (pretty much entirely by me).

Which, based on my observations on 'the feed' is what happens on Facebook on an almost daily basis.

I somehow thought I was above that bullshit. But I don't think any of us are. I think at some point we're going to read something the wrong way. And we're going to take it to a place it was never meant to go.

On the flip side. If I had done that, I wouldn't have this seemingly deep post on how the craziest shit becomes relevant for no good reason on Facebook AND I wouldn't have found out that another person actually reads this blog.

So...all things considered, I look at this as a win.

And, yes, it's true. Sometimes I can be a dick. As can we all. But this time, I think I just took things the wrong way.

Until next time, dear readers,  May your fish sticks be breaded and your tater tots be cheesed!