July 09, 2016
Another writer's group meeting this morning. We all rotate who is going to lead the meetings. I'm on deck.  I like the idea of writing prompts, so I tried to think of one.

Here was my picture. 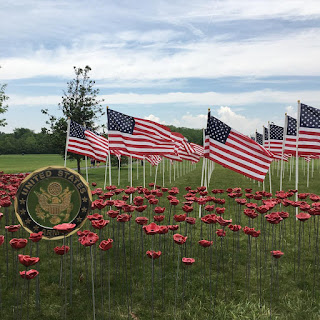 The word on the back was "surprise."  What follows is the result after 15 minutes. It's not perfect, but I think I will file it and maybe come back to it someday.

The flags stood stoically. Frank hadn’t planned on going to the memorial at all. He wasn’t one for displays of patriotism.

“This is fucking bullshit,” he thought as he pulled into the public parking.

“Welcome, sir, to the Field of the Dead,” an older gentleman said to him as he exited his car and started walking toward the flags.

“The Field of the Dead, Frank.”

“What the fuck are you talking about? Do I know you?” Concern grew in the pit of Frank’s stomach.  That’s where it started.

The old man stood before him, withered. But somehow familiar.

“What the fuck I’m talking about Frank is that you are in a field of the dead.  Each of these flags represents the lost soul of someone you took from this planet too soon.”

A wrinkled hand,  hardened by decades of manual labor caught Frank just above the elbow just as he was turning to leave.

“Not so fast Franklin.  We’re not done here.”

Frank stood paralyzed.  Only three people in his lifetime ever knew his name was actually Franklin. Two of them were dead.

“Yeah, dickhead. It’s me. And you’re not leaving. You and I have some unfinished business my friend.” As the word “friend” came out of his mouth, the old man’s face turned sinister, spittle accentuating the harsh edge of the word.

The pit in his stomach grew to a cavern. Beads of sweat gathered behind his ears. Shock and surprise at this sudden turn slowly gripped him. Any thought of escape at this point was moot.   He had to see this through at this point.

“Yes. You were there.  You were there when we all died.  There are three-thousand flags and nine-hundred and seventy-five peonies. And you put us here, Franklin.”

Speech seemed like a foreign concept. Jack led him around the memorial, which despite the holiday weekend and hour of the day, was surprisingly void of any life.

A placard hung from each flag. Each placard held four vital pieces of information. A name. An age. A location. And lastly, a cause of death.

The cause of death on each card was exactly the same….