I am still riding the high that comes after an event that one later recognizes as life-altering.

Dude. It was just 15 people partying in a cabin all weekend, how life altering do you think that really is?

Prior to the retreat, I had spent less than a few hours engaged in conversation with any of the other attendees. I mean, sure, I had gone to other work shops, talked about writing, and done the thing where you give a vague but still slightly interesting answer to the question, "so what are you working on now?"

This weekend was not like that. Not only did I have to answer that question, but when I did it was met with, "And then what happens?"  It's a completely different conversation because I know that there was genuine interest. Not only in what I was writing, but helping me make it better.

There was a breakout session where we had to throw an idea out in to the ring. Something that we had an idea for but hadn't really fleshed it out. When I did that, four other authors chimed in and helped brainstorm. So...my idea of a serial killer that poisons passengers before they board their flights to parts unknown got some much needed fleshing out. I actually have a clear direction for the story and some plot points I hadn't really considered before then.

And then, when we all got the point where we read, to the group, from a book that inspired us, I knew that I had found my people.  It wasn't their reaction to the book I had picked (although I was pleased to see that it had moved a few as much as it moved me. "Illusions," by Richard Bach--highly recommend it).  No it wasn't that. It was the fact that as 14 different people shared 14 different books that inspired them, I got to know 14 different people a little better. I got to see deeper in to what makes them tick and more importantly in to what makes them writers.

"OK. All of those who drank the dwarven ale, I need you to role a Constitution check."

I rolled a 7.  Bree Underbough, my female halfling Rogue who sounded much like a cross between Madea and Samuel L. Jackson, was now drunk. As fuck.

Not only that, but there were rats to fight. Apparently this particular tavern had rats in its larder that nobody really wanted to take care of. At least that's what that handsome Jonah and his twin brother (holy shit this IS some tasty Ale) told us. So, me and a few other of this rag tag band went down to fight some cotton-balls with teeth.  That Gnome, Short Round--or whatever his name was broke the damn key off in the lock. Luckily I had my thieves kit and even though I was at a slight disadvantage, I managed to pick that lock like a boss! Mmmm chile, you don't mess with Bree. Girlfriend, I know how to get it done!

To say that the 4 (or was it 5) hours that we spent playing a one-shot campaign were probably some of my most favorite role playing hours ever would not be anything near a gross exaggeration.  I had a blast and stayed in character for almost all of the entire session. Even going so far as to cause something of a can't stop laughing situation when I followed our cleric in to the ramshackle shrine to try to convince the local padre to revive our dead dwarf friend (look...all I asked, in my best Bree voice was if they had any of them tiny little crackers).

I didn't create Bree. Cassidy did. I was just playing the character.  It was a pretty epic moment though when Cassidy looked at me and said, "You know, I totally didn't hear Bree as a strong black woman, but now I can't hear her as anything else."  I just looked at her knowingly, clucked my tongue and said, "mmmmm girlfriend. I KNOW that's right!"

While we were trying not to get eaten by a treasure chest with teeth, others were playing Cards Against Humanity.  The cabin was filled with so much laughter that any creature that fed off the joy and frivolity of others would have been in a food coma for days.

After gaming, some fecked off to bed. Others (myself included) made our way out to the porch again.  I felt that I had not fed the mosquitos enough the night before and wanted to make up for that oversight.

In all seriousness though, those fun times were about connecting to each other as people.  Building the relationships. And to me, a self-proclaimed introvert with social tendencies, those moments were almost as valuable (maybe more so) than the writing-centric discussions.

As the clock was approaching 4 A.M., I thought it best to head up to the futon for a quick nap. I knew they would be getting up at 7:30AM to start the breakfast prep. And sleeping in the loft pretty much meant that I'd be getting up as soon as people started to stir down below.

A handful of us were up after 7. I stumbled down after those handful and did my best to wake up. The breakfast casserole, toast, and Monster helped with that.  A discussion of the twerking that Val and I had done whilst making breakfast the day before came up somehow. Well, wait. I'm jumping ahead. first we had to wake Carma - our fearless, albeit nearly voiceless, leader.  Valerie volunteered, I tagged along. We had just improved a skit at the breakfast table and decided to go with that. Only that's not even remotely what came out of our mouths when we stood at the foot of the bed. Somehow it turned in to some warped rendition of the Sound of Music. Needless to say it worked. She got up.

From there the conversation with the others somehow made its way to the footy ninja monkey pajamas I said I was going to bring.

"Oh, I brought them." I said casually nibbling on some toast (YEAAAAH Toast!).

When asked why I hadn't worn them, I replied, "Because it's been hot as balls."  I knew, though, that wasn't going to be enough to get me out of it. So I trudged back up to the loft and threw on the footied pajamas and came back downstairs.

NOW the question of twerking (based on my bacon making methods that were revealed the previous morning) hit the table. And Val, armed with "My Humps" playing on her cell phone and I, armed with monkey ninja footy PJ's and a willingness to twerk in peoples faces as they slept, went around to wake up the rest of the cabin.

Again. Not something you can put on the brochure. But every bit as valuable as the portions that focused on the writing.

I learned an invaluable lesson this weekend. No, not that I am part of House Ravenclaw (although I am--took the test again this morning and got sorted in to the same house). Nope that's not it.

Here's the lesson I learned, in a nut shell. 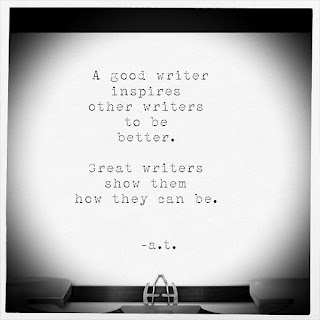 And this retreat was a collective of great writers. I don't care if you can't read their published works yet, every one there was great. Great for the fact that we love writing, can't imagine what our lives would be like without it, and can't for a single second NOT help someone else who is as equally infected with this disease as we are.

That's what made it great.


Have a great Monday my friends and may you find those who share your passion, for they are your family.