August 10, 2016
I am a writer. Not sure I'm an author yet. I'll get in to the differences (in my mind) between the two at some point in the future, but suffice to say that the first time I wrote just for me that wasn't something that was a school assignment and kept doing it, that was when I knew I was a writer.

Last August, about 37 years after I knew I was a writer, I took steps to actively seek out and become a part of a community of writers and authors.  Needless to say it has been an amazing year for my writing. True, not a single word has been published anywhere but this blog, Facebook, or Instagram, but that doesn't change the progression.

I know my writing has grown. And that has made all the difference.

This weekend I am going to a Writer's Retreat. A weekend filled with activities where other writers and I will be sequestered in a scenic cabin to grow the craft. And there will be some writing. Oh yes. There will be writing.

It may seem like a natural progression (and it is) and something that should be a no-brainer (it is that, too).  But it's a huge step for me.  HUGE.  It's me coming out and saying, "Hey. I'm a writer. And I'm serious about it now."  It's me looking at the other 15 people going, "yeah....I have so many fucking stories in my head that need to come out or they'll have me curled up in to a sobbing ball in my living room--Help."

If that seems dramatic, maybe it is. Maybe it isn't.  You don't really know what my brain is like. But it  is the next step in me earning the 'er'.  Going from someone who writes to actually being someone that can say "I'm a writer."

And I'm a little terrified.  I mean, not really, But kinda.  So...to combat the nerves, I find myself obsessing over things that really don't mean shit in the grand scheme of things.

The main obsession in relation to the Retreat is which writing tool I will take.

When I first signed up for it, I romantically thought that I would take a typewriter and a couple reams of paper. But the practicality of that never bore fruit.  It may one day be part of my writing workflow, but at the moment, it's not something that I can easily incorporate and would wind up hindering the process.

That led me to the 3 most obvious choices with what I had at my disposal.

The Chromebook.
The Macbook.
The iPad with a keyboard.

The three key criteria that I was looking at were portability, battery life, ease of use, and software/tools.

So, with those four criteria in mind, I started down the rabbit hole.

The Macbook was the heaviest with the least battery (4.5 hours).  The iPad and Chromebook were neck and neck with portability and battery life. The software gave the iPad the edge. The ease of use tipped it back to the Chromebook.

The question then became "What will I want to write in most?" If it was a straight up doc, then Google Docs would be fine. That alone would make the Chromebook the clear winner.

But I've recently started using Scrivener and I purchased the iOS version. So I could easily go back and forth between iPad and Macbook. I also have OmmWriter--a brilliant distraction free writing app that I used for most of NaNoWriMo. Both of those are loaded on both the Macbook and the iPad Mini.

This brought the key factors down to Battery Life and Ease of Use. The Macbook is the easiest of the lot to use. I love typing on the Macbook.    The iPad Mini wins on battery life, and with the ClamCase Pro, it's not terrible to type on. I do have to slow down a bit but overall it's a decent experience.

So, it's looking like the iPad mini is going to be the winner. And that's cool. But last night, in a conversation with one of the other authors, I realized that there may be a bit of alcohol involved in this weekend's events.  And if I need to type whilst slightly less than sober, the ClamCase has a strong chance of pissing me off.

Do I take the iPad in ClamCase and an extra keyboard then? It would wind up being something like this: 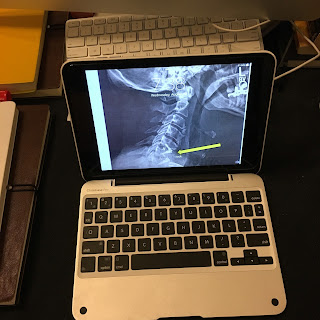 Not so much sober typing:T 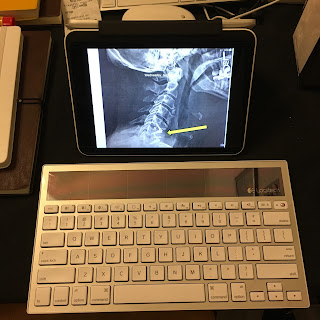 Logically I know the answer.  The answer is the Chromebook.  With an 11 hour battery life and a keyboard that has a very similar feel to the 2009 Macbook I'm using, it's kind of a no brainer.

That isn't going to stop me from obsessing over it until I leave for the cabin on Friday. I mean, it will literally probably be the last thing I pack in my bag.

At the end of the day, though, no matter how much I obsess over the tools I use--in the end they are only tools. There is nothing about either of the three that will make my writing any better or worse. Any more or less pure.

All of that rests squarely on my shoulders. A pack of Bic stick pens  (fine point with black ink) and a pack of legal pads would do just as well. And with the exception of the software, would blow the other devices away.

It's a security issue, though, isn't it? Or rather an insecurity issue.  I think a lot of new creatives (painters, sculptors, photographers, writers, filmmakers) get it in to their heads that if they have the BEST TOOLS OUT THERE that they will have no choice but to succeed. I know I suffer this for sure. But the simple truth is, the hammer doesn't do shit unless someone it holding is. And someone who is wired to build something is going to fall in to a natural rhythm whether you've given them a $5 hammer or a $50 hammer.

It's just a tool.

That's what I have to remember. And I think that's sometimes what I'm afraid of. What if the stuff I'm writing actually sucks? What is going to happen when other writers actually read my work. Not just other writers, but authors I know and respect. If they look at me, then my laptop and say..."does that thing play Solitaire? Because you may want to just stick to that.  Oh, not very good at solitaire either? Sucks to be  you."

I don't honestly think they would say that, but the doubt is a very real cloud that follows me daily. I can't speak for any fellow authors, but I have since lost count of the number of times that doubt has met me in the dark places of the night and asked me point blank, "what makes you think they want to read that?!?"

And I have found the answer to that question. It has been there all along. And it's the key, for me.

"There is nothing that makes me think anyone wants to read what I write. But that doesn't change the fact that I want to write it."

Whatever I take this weekend, you can rest assured, I'll be writing.

Darrin said…
Have fun at your retreat bro!
8:18 AM