You Should Read This Book

I will be the first to admit, Romance Novels aren't my go-to genre.  However, a series of recent events has softened that stance somewhat.

You see, I've always been a fan of the paranormal and supernatural storytelling.  And that's where this comes in.  I fell in with a rough and tumble crowd of writers a year ago. They had one underlining purpose to the group, to elevate each other. It was actually pretty cool. And through that group of writers, I met another group of writers. One of whom is the very talented Monica Corwin.

Monica writes paranormal romance novels among other things.  She just released a new book, the second in her latest series.  In the interest of that whole supporting fellow authors thing (especially ones I know personally), I pre-ordered her second book. And I also ordered the first book (which we'll get to momentarily).  I will be completely honest, I wasn't sure if I would read them--they were romance novels at heart.  But I did read them, and I'm glad.

I was instantly sucked in to the story and kept turning pages to find out what happened next.

And now Monica has asked me to share a special deal. You can check out that first book in the series that had me hooked for a stupidly low price on your ebook reader of choice. Just click on the link below the pic.  And then read the book.  And then go leave a review.

From "On A Red Horse"...
Scarlet needs a new job, but Horseman of the Apocalypse doesn’t sound good on a resume. Three years ago she followed her companions to Earth in an effort to live human lives. But the moment she left her husband Tyr she knew life wouldn’t be worth living. Lonely and longing for her husband, Scarlet is on a path of destruction that could endanger all the riders.

Tyr, god of justice, hunts his wife across the realms. From Hell to the Golden Throne, he travels until he finds her working as a phone operator. Scarlet is no longer the woman he fell in love with, and he is determined to bring that woman back to him if it takes the rest of eternity.

Even though the Horsemen live on Earth, they are still responsible for guarding four seals that can unleash the Apocalypse. When a prophecy is awoken by a deity who only has her own interests at heart, they must go on the defensive to keep their homes on Earth and protect the seals. If even one seal opens, it will start a chain reaction that will force the Horsemen to take up their mantles and destroy the new lives they’ve worked so hard to build. 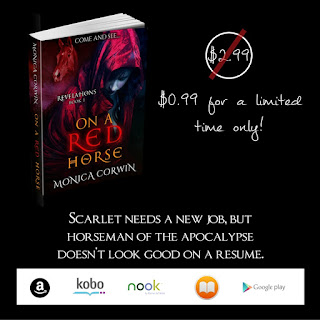 If you want to check out more about Monica and her other works, you should do that. Seriously.
Here's where you can find her.
Newsletter Sign Up: http://bit.ly/2a2cgiv
FB: http://on.fb.me/1cXqSLd
Twitter: http://bit.ly/1Bj1xXM
Goodreads: http://bit.ly/1JJgJOa
Amazon: http://amzn.to/1JJgUJB
Website: www.monicacorwin.com