Introspection and a Brain Dump of Sorts

There is a thing that people when they fail at something. In the process of doing this thing, they look at what happened, what went awry, is there anything to be done to prevent the same kind of failure from happening in the future. And what can be done in the future, should they attempt to undertake the same challenge.  This process is commonly called 'growth.'  It requires some serious introspection and asking yourself the tough questions sometimes.

Which explains why I haven't really done much of it since the second divorce.

The last person you should really look to is the guy who has tried to be married twice (didn't really take either time). It's OK, though, from the first marriage I got an amazing daughter. From the second marriage I got some good lessons and insights in to the kind of person I am and the kind of people I need to be in my life. So...it was kind of an 'all's well that ends in divorce' kind of scenario.

If you are looking for me to bash either of my ex-wives in this piece, you probably ought to move on. That's not really what this is about. Both women put up with me as long as they could, the best they knew how.   Now--don't get me wrong, I'm not taking all of the blame for the failure of both marriages. Short of abuse or death, the success or failure of a marriage is (in my humble opinion) solely in the hands of both people in the relationship.  Marriage is (or at least I think it should be) like this thing that you both hold on to. I got my end, you got yours and we walk together through life.

So, in the quiet hours in my apartment, it occurs to me that there are some key things that, had they been in place, would have allowed either or both of the marriages to continue. Maybe.

Maybe not. Maybe I'm delusional in that regards and what follows is actually the stuff of fairy tales, but I've seen marriages work and I think that the ones that do have, at their core, the following three things:

I should pause here to mention that I have absolutely no credentials in this field and this is all just stuff that's been floating around in my head. And it's been there so long that it's time to do a brain dump and move on.


A Deliberate Choice to BE in Love
I think falling in love with someone is by and large biological. We are attracted to certain people for certain reasons. Reasons that make us want to be around that person more and more. And at some point, we reach the conclusion that 'Hey...this person is pretty neat and I'd like to spend as much time with them as possible, please.' I'm pretty sure that phase is called being in love.  Being in love is such an amorphous term. It means something different to different people. I think most would agree that loving someone and being in love are two different things. Up to and past the point where the judge told me I was no longer married, I loved both of my wives. I still have a love for each of them. It's nowhere near the same kind or level of love that I had for them while I was married (or courting or whatever).  There are people in my life that I love. I tell them that I love them. Because I genuinely feel a love and gratitude that they are in my life. They enrich it.

Not at all the same as being in love. At least not for me.

So...here's what I (think) I figured out.  Being in love happens. I think it happens at some point for both people in a relationship. Once you've both identified it, that's when it gets wonky. I think the trick is that as soon as you realize you are in love with someone, you have to actually work to stay in love.  Just loving a person, just caring for a person isn't enough. You have to do those things to express your love for that person. You have to learn their love language and have to help them understand yours. There's at least one or twelve-teen books about love languages out there, so I'll spare you the bad paraphrasing.

I never really paid attention to it in the first marriage. And it in the second marriage, I knew it, but stubbornly refused to speak it or help my partner understand mine.

Being in love gave way in both cases to being in apathy. Being in a routine. The occasional sparks of fun and joy were there, but there was nothing deliberate. I wasn't doing what I needed to do to woo her every day. In turn, though I loved them, I think they thought I didn't--or I stopped caring. And eventually I did.

So...actively making an effort to be in love would have definitely helped. Maybe. I don't know. But that's where my head took me on that particular thought.

Open, Honest, and sometimes Painful Communication
Volumes have been written about this. Most much better than I could explain it here. You should go read some. The key with this one was the fact that I shut down.  I know that. One of of the marriages ended with a handwritten letter. The other end was precipitated by passive aggressive texting.

Gay marriage didn't end my marriages. Todd shutting down and turning inward, however, definitely contributed to it.  And when I shut down, as I tend to do (being the introvert that I ultimately am), then my spouse also shut down.

Laughter
There has to be laughter. You have to enjoy each other's company. There has to be silliness. Whether it's laughing at stupid shit post-coitus or finding those endearing inside jokes--laughter is critical. If I can't laugh with someone, I can't live with them. Period.

For me, when the laughter goes away, the other two areas just don't matter. If I can't laugh with you how can I be in love? How can I talk to you if all the communication is stilted?  Short answer-I can't.

I don't know where I was really going with any of that, other than I needed to get it out of my head. Yes. I am twice divorced. Yes. Both of my marriages 'failed' as some would say. But I don't think that the marriages failed as much as the people in those marriages failed each other.  For the part I played in that, I'm sorry. I don't know that either of my exes read this blog or not. But if you are reading this, I am sorry that things ended the way they did. None of it was really fair--to either of us.   I have long ago forgiven myself. I don't know that I can really have a conversation with either ex at this point. I just don't know them. I don't know what to say. I'm not the same person anymore and neither are they.   It just feels awkward from the standpoint of knowing that I used to be intimate with someone and in love with someone and now I don't even know who they are.

The last 3 1/2 years have been a roller coaster ride for me.  I have gone through an interesting journey of self-discovery.

I'm not ready to be married. I'm not looking to seriously date. I don't want a girlfriend. Someday I may be ready for and want those things again. But I'm still learning myself, to be honest. I'm still trying to figure out what makes Andrew Todd Skaggs tick and click and whir.

And it feels pretty fucking good. I'm on a mission....going for something that might be waaaaaaaaaay up there, but I know in my head it's reachable. So....we'll see.

For now....thank you for putting up with me and my random meanderings. It means more than you know.

Have an awesomesauce day my friends! 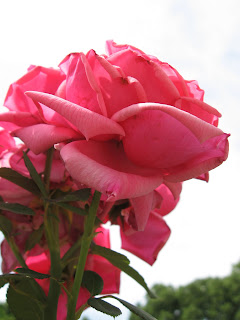