The First and Final Meeting of Overthinkers Anonymous

If you have spent any amount of time on this blog, it should be readily apparent to you that I am an overthinker. I used to think it was just me. I have a very layered thought process about things. The areas where I think I have disappointed someone, or may have done something to cause someone to think less of me (and therefore exclude me from their life) are the ones that pretty much set me in to a tailspin.

I whipped up this crudely-drawn scenario, because, as it turns out, I'm not alone.  So, this piece is called "The First and Final Meeting of Overthinkers Anonymous"  It's kind of how I think such a group might go. The guy starts off the meeting and everyone instantly starts overthinking things. 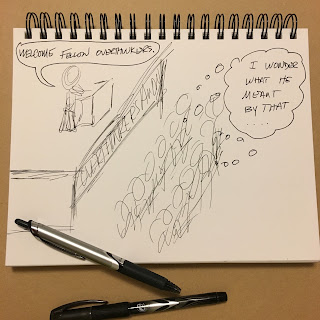 Turns out, though, that I'm already in a group like this.  Apparently other members of my tribe (who shall remain nameless) also fall under the siren song of this affliction. But just like the Argonauts, tied to the ship's mast with wax in their ears, this group...um... No, actually I'm not sure where I was going with that. Because, thing is...I know that sometimes this over-thinking paralyzes me. I come up with scenarios that will probably never happen (or, if I do want them to happen, that's a sure sign they won't). And sometimes I have entire conversations around something that really boiled down to me misreading a signal/cue/comment/email/whathaveyou. Did I mention that most of the time these conversations take place in my head? I mean...you knew that some writers are a little off their rocker, right? No? Well....now you know of one.

Case in point - The Saga of the 10 Second Story (hashtag 10secondstory; hashtag amwriting). Tuesday morning on Instagram, I posted the following: 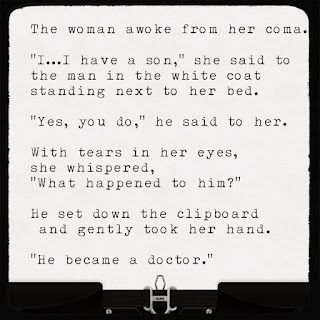 It was based on a few sentences I had in my little gray idea book that goes everywhere I go (including the Writer's Retreat last month).

There are a few things you need to know to put this in to context.

Up to speed? Good. So...I posted this. I was kinda proud of it. Then one of my friends posted a comment on it that simply said, "Who gave you the right."

Now....take all of those bullet points above and swirl them in to a nice big mental stew of, "holy shit--what did I just do?!?"  And you'll have a tiny glimpse in to the brain of an overthinker.

Here's what went through my mind before I could really even process what was happening:
And to further fuel the paranoia, others in the group liked the comment on the photo.

Had I looked a little more closely, I would seen that the same person gave it a 'heart' on Instagram, which is typically not done if you're mad at someone.

And I also should have thought through the fact that this person would have just told me offline, out of the public eye of a Facebook newsfeed if they had an issue with something I had written.

All of this made sense and I mostly calmed down about it. But not before actually sending a message to this person asking what I had done and did I really screw up?

So...remember the bit about me not knowing dick about Tumblr? Yeah. So...apparently there is a hashtag floating out there on the interwebs that goes a little like this #whogaveyoutheright .  This hash tag apparently means, "Who gave you the right to make me feel these emotions that the thing you posted is currently making me feel?"

Which is what the comment meant when it was posted on my pic (and why others also 'liked' that comment).

So...some good news. I didn't piss anyone off, but more importantly I didn't steal anyone's story line. And I don't have to go into hiding from this wonderful group of people that feels like a family to me.

This got me to thinking (well...I mean, let's consider the topic of this post) about how a few things. How much I really need this group. And how much I value the opinions of the people in the two writing groups I'm in.

It's not as important that they like me. I mean, it makes meetings easier if I feel welcome and actually like to be around them, but oddly enough--it's my work more so than me that I want them to dig. I value their thoughts as to whether I have the chops of a writer as much if not slightly more than the friendship (I realize that it it tightly interwoven, but yeah...).  Thus, the thought of possibly swiping another writer's idea was mortifying to me.

I could probably take a pill and quiet my mind a bit. I know I could. I did for fifteen years. And I have to say that those fifteen years were terrible for my creativity. When they stopped the depression, or rather stopped me from thinking about the depression, I realized that I no longer had that wellspring of pain to pull from.

I don't know how other writers work, but for me that pain is vital.  Something goes to shit in the "real" world, so I turn to the world I can control and make something beautiful. OR (as is often the case), I make something darker so that this world that I have to live in all of the time doesn't actually seem so bad.

This post just makes me love you more and realize how freaking glad I am that you finally found your way "home" to NCOW. :)

This post just makes me love you more and realize how freaking glad I am that you finally found your way "home" to NCOW. :)

Thank you Carma. I feel the same way. <3