I was thinking about a clever title for this. Something involving a messenger with winged boots, but in the end, Sir Elton John's 1972 classic summed it up quite nicely.

I briefly eluded to the saga of the Rocket back in a previous post (which can be found here).
Before I get too far in to that, however, I feel like I should give some background in to TTC (or Todd's Typewriter Curse as I have affectionately come to call it). It seems that when I find a typewriter, there seems to be something about it that's amiss.

There's the Royal that was actually doing well until I pressed on the platen knob the wrong way.   The Safari which the cat seemed to think was it's own personal....space (that beauty came from Craig's List).  There was a Royal Arrow that I think it's actually mostly OK. Just needs cleaned. I'm hoping. Otherwise, it might be an issue with the escapement. Fingers crossed that a good cleaning is all it needs.

The last of the typers to fall under the curse was an Underwood Electric 565 that I got at a garage sale for $10.  I can hear the hum of the motor, but it just won't advance. I'm hoping that's something simple like the tension band (at least I think that's what it's called--I'm still learning).

So...fast forward to about 3 three weeks ago. I was at a writing event at a friend's house. This friend collects typewriters and has been my sherpa. Guiding me through the jungle of thrift store finds and helping me make sure I don't wind up with something I won't be happy with.

While there I got the chance to actually type on some of the machines in her collection.  I fell in love almost immediately with the Hermes Rocket.  I set my sights on that gem of the ultraportable world. It's sleek. It's sexy. It's a dream to type on. And I wanted one.

The Hermes, in car terms I'm told, would be something along the lines of a Mercedes or BMW. You are getting a quality machine. One that is built to last.

Here's a shot of my friend's Hermes Rocket: 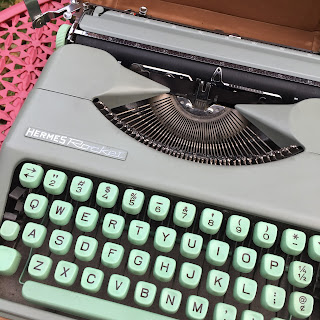 I knew I was going to Herman's this year (after the way it was described to me, I really couldn't miss it), so I put the word on the Antique Typewriter Collector's page that I was in the market for a Hermes Ultraportable (Rocket, Baby, or Featherweight).

I didn't hear anything. I found out later it was because most of the people were trying to get their own gear ready for the meet-up at Herman's (and not that they were ignoring the newb as I had originally feared).

But my friend came through. Unbeknownst to me, she also put the word out and I found that I was going in with my choice of a Rocket or a Baby.  I was beside myself.

We got to Herman's and I saw my two contenders on Saturday.  The Baby was gray in a gray case. It had the classic Hermes portable look to it.  It also had the Montgomery Ward decal.  I was tempted. Sincerely tempted, but then  saw the Rocket. 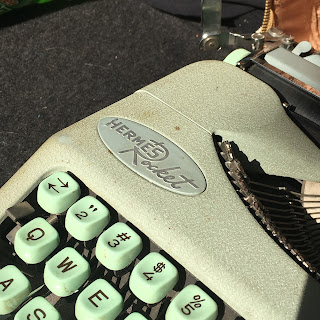 I'm told this one dates from some time in the 50's. It had that classic green case/keys.  I loved the logo--it reminded me of the sci-fi classics I grew up on as a kid.  It did not have the classic snap-on travel case, though. It had a leather attache case, which looked to be custom made for the Hermes ultraportables. 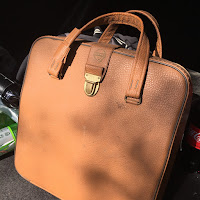 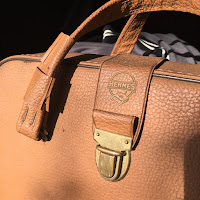 Being a huge fan of bags, I found the tipping point. So, that's what I went with.  I knew the zippers on the bag would need to be replaced and the Rocket would definitely need to be cleaned.

I was showing a couple of the other collectors there the Rocket later that night and made a deflating discovery.

Todd's Typewriter Curse had again struck.  We were putting it back in the case and found that the Carriage Release seemed to be....well...missing.

Yes. Missing.  It wasn't that the knob had snapped off. Nope. We could see the holes in the carriage where the bar is supposed to be. The bar, and release at the end of the bar were completely missing.

And I was a bit sad that I was going home with a non-working machine. I mean, it worked, but there would be the minor annoyance of not being able to release the carriage without hitting the space bar.

The seller of the machine was completely unaware, and no one else there had really ever seen or heard of such a thing. I know he's on the lookout for a replacement part so that machine could be made whole again, so I left feeling a little better about the whole thing.

And then, Monica, the writer/friend/typewriter guru who set me back on this path of creating on these beautiful machines, again did something unexpected. She said, "Here's what we'll do. You'll take my Rocket until we can get yours fixed. You should have a machine you can type on."

I was speechless. Not a new state for me this past weekend.

That's what this community is like, though. I made some new friends this weekend. Friends that I know I can call on for advice or help. And if there's something I can do to help them, like craft a clever blog post--I definitely will. It's yet another tribe that I find myself in.

I have my borrowed Rocket.  And I thought that really would be the end of the saga, but as it turns out, that's not quite the case.

On the way home we stopped at an antique mall for a crash course in 'typewriter hunting.'

I stumbled upon this. 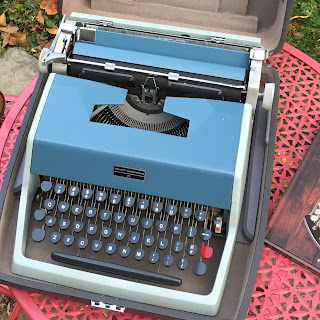 It's an Olivetti-Underwood 21. "It's basically the guts of an Olivetti, wearing Underwood clothes" as Monica described it to me.   The machine also has a very similar feel to the Olivetti Lettera 22 that was the favorite machine of one of my writing inspirations, Mr. Leonard Cohen.  I knew from there I had to have it. And...thus far it does not exhibit any signs of falling prey to Todd's Typewriter Curse.

Fingers crossed.  Now, if you'll excuse me, I have some typing to get to.