I'm glad I took the day off work. I have found that taking a day after a major event or weekend to process said event or weekend is a worthwhile thing.  Had I tried to process all of the amazingness of this weekend in the limited span of yesterday afternoon, I know I would have been a zombie today.

I'm still pretty much a zombie, but at least I'm home to process it in my own way (involving shorts and a t-shirt).

Todd--what was this amazing event that has you zombified and in gym clothes?!?

It was the Annual meet up of Antique Typewriter Collectors.  Or, as it's known by most, "Herman's."  As in, "are you going to Herman's?" or "Can you bring that with you and I'll get it from you at Herman's?"

This is Herman. A gracious man, a generous host, and a font of knowledge when it comes to typewriters. To say he is world renowned in this field would, in my opinion, NOT be hyperbole. 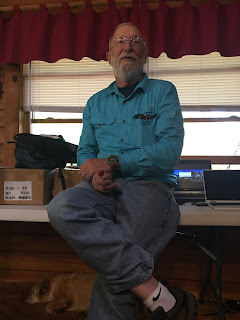 A friend and fellow writer got me turned back on to the manual typewriter. My feeble attempts at collecting had yielded quite a few Royal models in various states of functionality, a couple of electrics, and a 1929 Underwood from my dad that I want to restore to its former glory.

But I didn't really have a typer I could use on a daily basis. And that's what I really wanted. After trying her Hermes Rocket at a recent writing event, I knew that's what I wanted. I put word out on the Antique Typewriter's collector page on Facebook that I was looking for a Hermes ultraportable, but got no bites.  But that's a story for another time.   The saga of my Rocket is its own tale.

So, who in the world collects antique typewriters?
Doctors of Philosophy, authors, college students, elementary school students, entire families, retired professors, I.T. professionals, mechanics, mechanical engineers, photographers...the list of people who collect is as eclectic as the machines they collect.

It is a wide and varied group.  A group that looks a little like this. 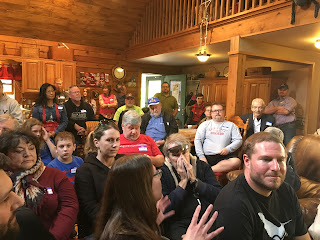 One commonality among the group is that most everyone here that has a passion for the machine known as a 'typewriter' has a passion to see the machine working and usable.  Granted, when they get that machine restored and working they may never type on it, but they know they could. That's what separates the collector from the etsy hobbyist who buys old machines to chop keys for those cute, hip necklaces or charm bracelets. To me that's as bad as the albums that get melted and formed in to chip bowls.

The other thing about this group, is that it is overwhelmingly welcoming.  I'm a newbie to typewriter collecting. I barely know what I want in terms of machines to focus on. I was the second newest 'collector' there (and I missed getting an award for that by one week).  I have 8 machines. Most of the people that came to Herman's brought that many machines from their collections to sell and trade this weekend. Never once though, did I feel that my questions were stupid. I was welcomed. It was awesome.  Again, to find people who have a passion for something I really dig and the fact that they wanted to share their knowledge instead of hoarding it.

In short, it was amazing.

There were a couple of "once in a lifetime" moments that really made the weekend special.

At the meet-up last year, I'm told, Peter Weil and Paul Robert talked about the upcoming release of their book, Typewriter.

This year they did more than talk about it. They brought the first 100 copies.  Signed and numbered.  AND BOTH of them were at Herman's this year to sign the books.  Considering that Paul is from the Netherlands, this is definitely one of those rarities that seem to abound a weekend at Herman's. 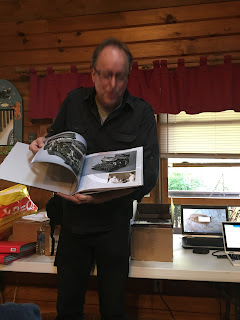 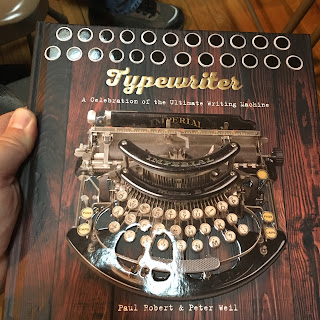 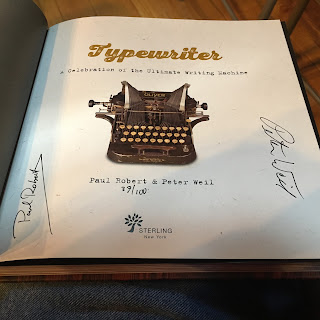 I know this is definitely one of those special things that won't happen again.  It was just one of many that are currently swimming around my brain bucket awaiting some kind of processing.  Side note--you should totally go over to Amazon and get this book. The photographs are beautiful and the history of the various machines is unsurpassed. It is a masterclass in a book. And if you are the least interested in typewriters, it should be on your book shelf. Don't let the blurb about hipsters scare you away from getting it. You need this book in your collection.

Another book you should look at is The Typewriter Revolution by Richard Polt.  It was the first book I was told to get when I expressed an interest in typewriters.

So...another cool thing about the weekend--Richard Polt was there. I got to meet him. Talk with him. Watch him crush the speed typing competition. 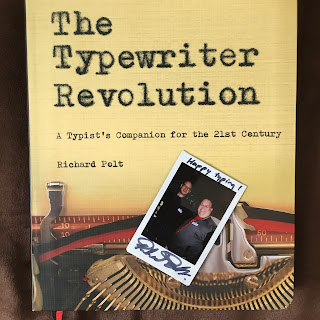 I can't really say enough how great the weekend was. I think as I go through my life and become unashamedly geeky about the things I am passionate about, it's refreshing to me to find pockets and tribes of people who are also geeky about those things. I don't really like large groups (and most of the time small groups, if I'm being honest), but it's different when I'm around people that share the same love for those things that I am now (or for years have been) geeking out over.

This weekend was such a weekend.

In case you're wondering, I did come home with a Hermes Rocket. Monica, my typewriter pusher, made a few inquiries and I wound up with 2 Hermes Ultraportables to choose from.  Of course, I chose the one that invoked Todd's Typewriter Curse (more on that another time). But all was made right.

And on the way home, a quick side trip yielded another find.... An Olivetti-Underwood 21 in its original case with original accessories.  I'm told it has a very similar feel to the Olivetti Lettera 22 that one of my inspirations, Leonard Cohen, swears by.  So we'll give it a go. It's in beautiful shape and appears to be fully functional.

Just another feather on the cap of a kick ass weekend. 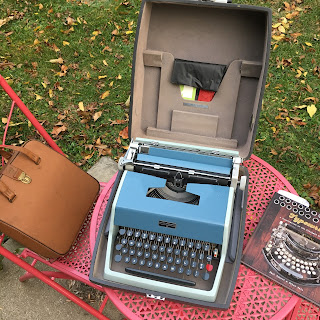 If the weekend has taught me anything it is this.


Alright. It's time to step away from this machine of the future, and load some paper in to this machine from the past that is sitting here waiting for me to infuse part of my soul on to the pages.

Have a wonderful day my friends!

Could you please post more detailed photos of your Rocket and the case!! Thank you for this wonderful blog account-wish I could have been there!

Thank you for this wonderful article!

A great write-up from the heart Todd! Wish I could have been there but there's this big pond they call the Atlantic in the way. Please you got a nice little Hermes!

Todd, it was great to meet you. I am glad you had a good time and hope to see you again next year, for the TENTH CONSECUTIVE ANNUAL TYPEWRITER COLLECTORS' MEETING. There were about 20 for the first meeting, we had only 7 one year, but reached over 60 this year.

Herman,
It was my pleasure as well. I was beyond excited to attend. I'm already planning on being there next year. This is high on my list of things I will look forward to annually from here on out.

It truly was an amazing weekend for me. Thank you and the rest of the group for making a newbie feel so welcomed!

What a great post. Thanks for sharing! When I heard Richard was going to be there last minute I was exited for you all. Even some of us who couldn't make it in person had "typewriter pushers" and got machines. What a great event and a great community Looking forward to #10.

Fantastic article! I'm glad you were able to attend Herman's this year.