Two Questions And A Gassy Lambchop

You might be sitting there asking yourself, “Dude...you won. You hit your word count goal for NaNoWriMo. Why the heck are you still writing?”

And that’s a good question.

Or you might be sitting there asking, “Why are you writing another flipping post about NaNo? Jeesh dude. Move on. We need some insight in to why sheep farts aren’t blowing holes in to the ozone layer.”

The first will be a bit easier to address in this forum.  Yes. I finished my first draft. And yes, I hit my word count of fifty-thousand words. Both of these are true.  Thing is...I finished my first draft before I hit my 50,000 word count. So, while I could have easily said that I hit my goal and purpose for participating in National Novel Writing Month, it would only be half of the answer.  Just as hitting the fifty thousand word count is only part of the answer.  Sure...to be deemed a ‘winner’ by the magical word counting applet on the NaNo site, you have to hit and submit 50,000 words.

Here’s how I’m looking at it though. It’s “National Novel Writing MONTH.” Not “National Novel Write until you hit 50,000 words undefined period of time.”  And this year, I’m all in. Including today I have 3 more days to write. I’ve already written a couple of poems and a daily list of reminders to live by. So I’ve got a couple hundred words on the day so far.

And then there’s this. Whatever this might happen to wind up becoming.

But Todd, what if I don’t have anything to write about? What if I can’t?

THAT is the time you MUST write. When you think you have nothing to say. When you think you can’t possibly type another word in that manuscript. Write.  Fine, don’t put another word in the manuscript. Write a poem. Write a love letter.  Coincidentally, I have proven today that both a poem and a love letter can be written to pizza.  I mean, sure, I don’t want to marry a pizza , or know one biblically, but I can’t imagine a life without pizza. Some people in my life are like that too, but dude...pizza.

Sorry, where was I?

I think for me, one of the ways I knew I was a writer  (as opposed to someone who just writes, because there is a difference), is that if a day goes by where I haven’t written something in a creative vein, the day feels wasted. Lost. Like there was some bucket of potential awesomeness wasted. Like my muse is looking down on me and shrugging her shoulders, turns to the other muses and says with exasperation, “Sheeeeeeeeeyot. I have NO idea what his problem is. I’ve been popping nuggets of inspiration in his brain bucket all day, that muhfu’er is trippin.”  I mean... I have to imagine my muse is a cross between Samuel L. Jackson, Pauly Shore, and Sigourney Weaver (circa “Paul”).

So, that’s why I’m writing. On a day where I have already typed ‘The End’ on my first draft of one of my works in progress.  And why I’m writing after having technically won NaNo.  Because I need to write.

I would love to be able to wake up tomorrow and tell my job that I’m not coming in. I would love to sit at the kitchen table and write out checks to pay off all my debts. I can see myself licking the envelopes and affixing the stamps. I’d take the stack to the post office, because it’s more dramatic.  I’d post every single one of those bills, paying off the final payments. I’d drive home from the post office, throw some gear in the car,  and head down to the Farm.

I’d go in to town for supplies. I’d come back to Ohio for writing events with NCOW and CMC. I’d probably squat on someone’s couch for the Month of November, if they'd have me.

And I’d LIVE to write.  As opposed to now, where I write to live.

I see that so vividly that I know some form of that is going to happen at some point in my life. There are other things that I have seen vividly, too. Not sure how true those will be. Kinda hoping the one about losing my legs passes me by. But the one about sitting on a rocking chair on the front porch rocking while the woman I love sits beside me is one I could stand to see come true. I never see her face in the dreams, but I know she’s there. Wonder if I’ll see her face in the dreams when I meet her? Who knows (I can already hear my dad whispering, “The Shadow knows...”)?

And there you have it.  Almost 900 words toward my daily word count.

OH. There was another question, wasn’t there? Well...to be fair, I don’t have much knowledge of the destructively flatulent properties of domesticated livestock, but I believe I read somewhere that there is a particularly high concentration of methane in the farts of sheep in Australia and because of that, the ozone layer is noticeably thinner over that region of the globe.

As to why another post on NaNo?  Simple. I wanted more posts on NaNo last year. I needed to hear from other people who were struggling, but making it work. People who were determined to hit their count no matter what. And if there was a healthy dose of profanity and wooly toots along for the ride, so be it.  But I didn’t have that. I didn’t find it. I didn’t find those nuggets of fortitude in the posts of my friends who wrote.

So...in the (highly terrifying) event that there is someone like me out there, I want them to have these kinds of posts.

These, “Yes, NaNoWriMo can suck your soul dry, but you’ll come out a writer” kinds of posts. Call in paying it forward. Call it padding my word count. Either way, it’s creative writing. It’s something that is now in this universe that wasn’t there an hour ago when I sat down in this (amazingly kick ass) pizza joint 3 blocks from my house. 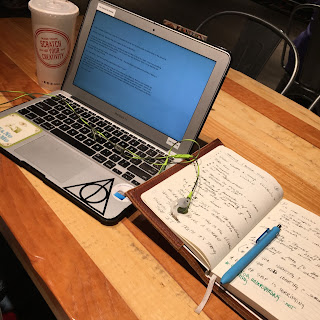 Whatever you choose to call it, I call it writing.