I think I'm a little crazy.

Sometimes I fall down the rabbit hole of amazing televised dramas. Last year a sleeper of a brilliant show called Sense8 hit Netflix and I was hooked. The Wachowski's and JM Straczynki teamed up for a 12 episode mind-fuck that honestly affected me deeper than anything since the first Matrix movie and deeper still than the Vorlons in Babylon 5.

And then life happened. I would talk about it when it came up with people who had watched it. And then...I find out there's a Christmas Special coming out in 2 days AND they are doing Season 2 next year. So...I do what any obsessive fan would-I binge watch the first season. Sleep be damned.

Rewatching it, I'm viewing it through a different light. No spoilers if you haven't seen it. And seriously, if you haven't, you should.

I caught a line about Dr. Strange that I missed the first go round.

But I picked up on something.  THIS time I know what's happening to the sensates.  They don't. And the first time I watched it, I was figuring it out along with them. Knowing what they're going to discover before they do puts a powerful spin on the series and reveals the rabbit hole to go deeper than I had originally thought.

So, Todd. What does a kick ass show have to do with you thinking you're crazy?

Well, plot device, I'm glad you asked.  I have long since thought that if someone has the wherewithal to question their own sanity, then they are probably not going insane.  I am not a doctor. I did not google that or find it on WebMD or wikipedia.  It's just something I've always believed.  Right or wrong.

And to be fair, it's a rather self-serving hypothesis. It keeps me calm when I think I'm crazy.

Honestly, I still think I am, to some degree. All of the creatives I know are crazy. Or broken. Or in most cases, both.

I'm probably in the latter category if I'm being completely truthful. There are days. Nope. Scratch that. There are hours and minutes of every day where I look at the life I'm stumbling through and think to myself, This is not my life.  These things aren't real. In my life, I'm a successful writer. I'm friends with the writers I look up to (THIS piece of the 'dream' is actually something that lives in both worlds, so I'm pretty lucky there).

Not to sound like a Talking Heads song, though, there are times when I DO look around and think My god, what have I become?

And then it hits me.

I haven't. I haven't become anything yet.  I AM BECOMING...but that process is still ongoing.

This world that feels real some days and like a bad high school musical set piece on others isn't my true world. It isn't my true self.

It's my chrysalis. And it would seem I'm still in my transformation, because I haven't shed its trappings yet.

But back to Sense8, many of the people in the cluster thought THEY were going crazy, too. Then they found themselves in these lives...these places that were both foreign AND familiar.

I know this feeling often. There are times when I'm going through the day to day stuff and I shift from POV to Third-person.  It's the weirdest fucking thing when it happens, because when I'm in third-person, I can see other alternate timeline versions of me. Sometimes they are from this timeline and haven't yet manifested.

I don't know. it honestly made more sense in my head. And I'll probably revisit it at some point, because I think it's a think. Like there are times when I am grounded in this reality, but have memories or feelings from the other realities. it's a bit trippy when it happens, but it's somehow calming, too. To know that in an alternate timeline, I'm already a successful, best-selling author. And I know that it's possible to move things from one timeline to the next, to adjust them. To clean them up (because alternate timelines are messy by nature).

Which, of course makes me sound like a crazy person. But I'm not, because I think I might be. Right?

Alright, before someone calls Dr. Metzger,  I'll sign off now. I need to talk to Jonas about a few things anyway. 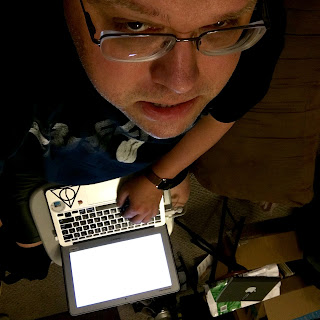