The Darker Side of Empathy

The day was a pretty typical day. I went to bed Friday night filled with plans of waking up early and taking charge of the day. Laundry, apartment rearranging and junk purging, writing, dishes..it was quite the list of domestic godhood.

Saturday's alarm clanged out at the appropriate ungodly hour and my snooze reflex engaged for the next hour or so.

When I finally did roll out of bed (literally), the morning and day didn't seem as clearly defined as it was when I made the list the night before.  The morning was spent nibbling leftovers, Monster and binging on Travellers on Netflix.  Funny thing is, I was OK with this shift in day plans.

I did some more work on the web site, Twistedzen.com.  It's still not great, but it's better than a 404.
I managed to do a couple of loads of dishes and combine my dirty clothes in to a single pile of shame, so  I marked it as progress.

I was catching a movie with a friend in the afternoon.  Side note, if you have not seen Collateral Beauty, I think you need to. Seriously. Not only did the movie go a long way to restore my faith in humanity, but I think it's hands down Will Smith's best role. It had all the feels. The timing was on point and it was just an amazing movie. And yeah, I cried. If you come out of that movie without at least getting a little teary-eyed, then I'm not sure I want to know just what it would take to emotionally move you.

So...yeah.  The movie. It was a flood of emotions.  This is normally the kind of thing where I would come home to a silent apartment and process everything I just saw and felt.  It was an intense movie emotionally.  And for someone who considers hisself an empath, being in a movie theatre full of people processing those same deep emotions was pretty much like getting dosed. I was working through a thick, gray, emotional blanket of..stuff. And I'm not sure I was very good company at that point. And that probably led to me not really thinking through what it would be like to hit BW3's on a Saturday night where there were many sports events happening, including a Columbus Blue Jackets game.

Throughout my life, I have been in touch with my empathic nature in varying degrees of sensitivity. From the tingling that something about someone just isn't quite right to the full on feeling of rage standing next to someone who is seething, the anger rolling off of them in waves.

Last night topped them all.

At first I thought it was just my stomach being it's normal odd self. The appetizers of fried pickles went down easily enough. The Leinenkugel Cranberry Ginger Shandy wasn't bad. Then the food came out. We'd been there about thirty-minutes at that point and I noticed that my arms were tingling. It was as though there were tiny bubbles of carbonation rolling over the entire surface of both arms, temperature fluctuating between warm and cold.

I had to step outside a couple of times to take work calls. It was single digit temps last night, but somehow it actually felt better to me when I did step outside. Coming back in to the restaurant was like walking back in to a wall of thick sounds that  I couldn't quite navigate. The feeling was disorienting.

I think that's when I figured it out. Going form the silence back in to the restaurant. I tried to focus on the conversation at our table, but it was like I was hearing every single other conversation all around me at one time.   Then the visual stimulation of ten flat screens in my immediate field of vision.

At that point my stomach started letting me know that it wasn't having any of this.  I thought, again, it was just the same old tummy bullshit that my stomach had been giving me earlier in the day.

We finished, and as soon as we stepped outside, I felt the queasiness notch down. It hadn't completely abated, but it had decreased.

After getting dropped off to my apartment, I walked in and curled up on the couch.  A dark quiet apartment.  Within about 15 minutes, the sickness had floated away.

That's when I started putting all the pieces together.  I went from the flood of seriously intense emotions of grief, relief, pain, and joy from the movie to an establishment full of agitated and amped up sports fans and it was too quick of a 180 for me to process.  I guess that's the darker side of empathy. It's never a cakewalk for the empath. I don't care what anyone says. Gift or curse, there is always a price for giving in and letting it wash over you.

The plus side is, if I ever decide to write about a fledgeling telepath who suddenly hears hundreds of thoughts in his head, I'll know what that feels like. Or how it feels to be attacked with a non-lethal sonic weapon.

For now, though, I will go back to my regularly scheduled day of playing D&D and not being Batman, LEGO or otherwise.

Have a good rest of your day, my friends. And please, stay warm.
-AT 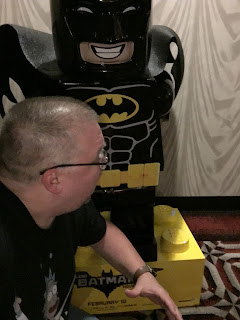 Sending you a big warm blanket of comfort.

Thank you. Today is much better. Especially knowing that I'm not crazy and others have felt this too. 😊