There Is No Time

In between rehydrating after Saturday's D&D session (and subsequent all night whiskey/philosophy session with one of my favorite writers and mentors, C. Bryan Brown), laundry, and seeing how many ways NPH was going to break the fourth wall in the Lemony Snicket's Netflix series, I had an idea hit me.

It was an idea about time.

Another one of my favorite authors and friends, Monica Corwin, had a newsletter come out a couple weeks ago with a subject line that has been wandering just below the surface since I read it.  It said simply, "Time Doesn't Exist. Clocks Exist." I assumed it was from an episode of Dr. Who that I have not yet seen (I'm still stuck in the Tom Baker years, forgive me). A cursory search on the googles found the quote all over the world...in graffiti, on numerous boards on the black hole that is Pinterest, and in scientific journals.

It seems I'm not alone in my view of time.  I started thinking about the quote. "There is no time like the Present."  I stared at that sentence for no less than thirty minutes before I realized that it was grammatically incorrect.  So I fixed it.  In at least three ways. 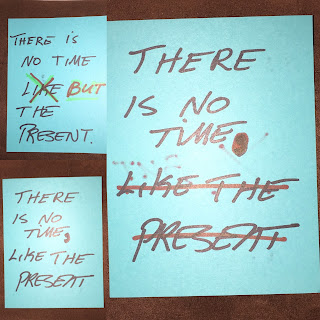 Based on the way my brain has thought about time, all three work. To me, though, the large one on the right is the best one.

There is no time.

Time is an imaginary construct. It is an agreed upon unit of measurement. A mass hallucination of the highest order. Meant to keep humans on a 'schedule.'

But it's complete bullshit.  If it were a constant, then we wouldn't need "time zones."

There are people much smarter than me who have, on a quantum level of physics, postulated the misuse of Time as the fourth-dimension so I'm not going to embarrass myself by attempting to paraphrase them here.

I will instead apply this to how I see it being at work in my life.

From my teenage years, I have known, as surely as I know my name that Time was not linear.  Time was not a constant. If it was, there would be no way that it could be 7 pm in Ohio and 4 pm in California.

I love people talking about time machines-how they can't wait until we have time machines.  I look at them dumbfounded.  We already have them, I say.  They are called air planes, cars, busses, sneakers. Anything you can use to cross from one of the so called Time Zones to another is a machine for traversing time.

The construct of time or our measurement of time leads us to believe that it's linear. I discard that notion. I have always thought that anything that has ever happened, and will ever happen, is happening right now. In this instant.

Because in this instant is the only time that actually matters. The present. This moment you are living in. Right now.

But Todd, you're not ANY of those things right now. What the hell, man?

Glad you asked. Thing is...I AM  ALL OF THOSE THINGS. Because time is not linear. It's here. All at once. Those things are in this cloud called time, I  have glimpsed them because this form I am in is tied to those events. So at some point in the universal trip, my form will shift in to that space and my present reality will be one of those things.

As sure as I am sitting here typing this, I know those things are going to happen.

Maybe it was just a dream...wishful thinking. Did you ever think about that?

Oh god I hope so!

What is a dream? Is it our subconscious working out problems of the day, or imagining ways to help us reach our goals?

It's a work that someone created.

Who is to say that this life I'm living, that we're all living, isn't some tale in some cosmic tome?  Each time a page is read and turned, some cosmic event in life that I've seen or dreamt because the reality.

A book as a beginning, a middle and an end.

So too, does our life. But as with a book, the only thing that matters is the page you are currently on. Sure...you can skip ahead to see how the book ends (and I think we do that do an extent with our lives in dreams and vision quests).  And you can read the previous pages to examine how your character got to where they are.

But only page that matters at this moment is the page that you are reading.

The present. This page right now. You have to read this page to know how the story works later (Even though you are holding the entire future.

I'd stay and dig deeper on this one, but my lunch break is over and there's just no time.