Peeling Back The Layers

I apologize, dear readers, for my absence of late. I know if you follow me on Facebook, you might have seen the guest post I did for the awesome Violet Patterson. And you know that I'm currently in the middle of writing a piece that's going to be included in an upcoming Urban Fantasy boxset called Midnight Magic.

But that doesn't really help you if you are jonesin' for a piece of ye olde bloggy blog, now, does it? No. No it does not.

I appreciate you sticking with me friends (or people who read me, secretly hoping I'll fall flat on my face with this writing thing...either way, you're reading...so...I kinda win).  I'm not going to totally bore you with what's going on in my life. OK. Maybe just a little.

So...this might come a shock to you, but most people I know who are even a little bit creative aren't really what society considers "normal." I am no exception to this stereo type. I long ago embraced the fact that I was broken. And instead of trying to fix myself, I was going to use my creative outlets-whatever they may be- to try to help other people navigate the waters that threaten to drown all of us non-normals. Writing, video, music, photography, and anything else that helps me tell a story of some sort are the palette I draw from in this endeavor.

Erm...so along with that whole 'broken' thing...eh. Let me back up a bit. Here's a little insight in to the inner sanctum of my brain bucket.

I have social anxiety.  I don't know when it really kicked in. I can hazard a guess. If I had to guess, I would say it was that unseasonably warm winter day in the Waterbeds and Stuff on North Campus. I was back in the section of the store separated by the cheesy beaded curtains, looking at the porno videos and sex toys when I heard the bell above the door jingle. And then I heard the click of a lock. That wasn't normal and I was about to come out, but I paused when I saw some dude pointing a gun at the clerk. I was the only other person in the store. The robber took all of the money from the register and he took the phone off of the wall and bitch slapped the clerk upside the head with it. Telling him that if came out of the store in the next 15 minutes, he would shoot him. He then unlocked the door and ran out. Leaving a dazed clerk and me, about to piss myself, my legs threatening to rebel with the mother of all charley horses from trying make myself as small of a ball in the back corner of the naughty section of the store to avoid getting shot.  The clerk jumped when I walked out. Apparently he had forgotten I was there. This was before cell phones were widely popular.  Land lines were still vogue.  He told me he needed to go to the next shop and use their phone. And he locked me in that fucking store. It felt like forever until he got back. I had to wait and file a police report. I was useless. Gun focus had taken hold, as it does with a majority of eye witnesses to an armed robbery.

Here's the thing, I don't instantly go back to that memory. Hell, it was easily 20 years ago. And I was well-adjusted for quite some time. But that was, if I had to surmise, the day the seed was planted. It took a decade or two to really take hold.

For the past few years it manifests itself as these insane conversations in my head. And, to be fair, sometimes aloud. There has to be ample time for me before an event to go through the reasons why I shouldn't go. Usually it boiled down to the fact that I was invited because the person just felt they needed to be nice to me, but didn't really want me there. This resulted in me waiting to join the local writers group. It caused me to nearly miss the gathering of writers hosted by a friend of mine which led to me also joining the writer's group up North. These three events have been responsible for my writing growing more than it ever has in such a short time.

And yet, it took three months of invitations to get me to go to the first meeting of Creative Minds Columbus. And as for the gathering of writers...the only (and I am NOT exaggerating this), but the only reason I followed through with going was that I had committed to making a dessert. It was the first time I had made this dessert (but I had eaten it at many potlucks).  This dessert led to several marriage proposals that night. I am apparently a dessert husband to several women in the North Central Ohio area. Which..I'm cool with, to be honest.

Point is--I almost didn't go. Looking back on it, I feel much like Will Smith looking for cigars, "Almost put a hex on the whole damn thing."

I dealt with this (still deal with this) for years. This anxiety about being around people in a social setting. Are they judging me? What do they think of me? Am I funny enough? Do I have good enough stories?  There is a long ass list of questions that loop through my head when I have to interact with people out of the constructs of a business. And it's not fun. It really does a number. I start to question feelings, get emotional about situations that are only causing me distress because I'm overthinking the fuck out of them.

So...in talking with a few of my creative friends, I learned that I am not alone. And prior to these conversations, I never really thought of myself has having anxiety issues. I never had panic attacks.  At least not that I knew.

Turns out that overthinking and going down the rabbit hole when you have one of those stray thoughts IS a major component of many anxiety disorders.

I was about to apologize for being too real, but the simple truth is, if you made it this far that's on you-warning or not.

So, I talked to my doctor on my last gyno visit (I think I covered this somewhere), but anyway...yes. She and I talked and she started me on something classified as an anti-anxiety med. I was adamant that it not be an anti-depressant. I knew after being on them for 20+ years that they sap all of the creative urges from my body.

I've been on them for almost two weeks. And as funny as it sounds, I was afraid I wouldn't be able to write. So I was avoiding sitting down at a keyboard. Which, let's be real, is a phenomenally stupid course of action when I have deadlines for that box set that I'm in.

Some may argue that I still can't write, but fuck those guys. This is the breaking of the seal, as it were. I feel good about the fact that I can still write. The overthinking conversationalists in my head have quieted for the time being, and that's a very good thing.

Being able to engage with people on a social level again is kind of huge. I'm looking forward to it.

And now, if you'll excuse me, I have some writing to do. 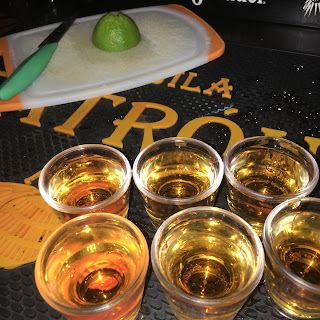