A Dialog With The Universe

I am no longer a man of religion. I may be again one day, but for now I observe a healthy distance from most things that would fall in to the bucket of religion, or rather 'organized religion.'  My reasons for this are the topic for another blog post and are neither here nor there today.

Nor am I man fully of science. I recognize the role of science in this world, but I recognize there are things beyond the cold formulas and precise calculations that reduce the universe to a series of equations.

Rather, I am somewhere between. I would call it spiritually optimistic. I believe and hope that there are things in this universe, these universes, beyond what both science and religion can explain.  Maybe magic is a word that fits.  Those of a purely religious bent might consider this magic to either be the work of God or the work of Satan.  While those on the science track would say that it is a thing that has a logical explanation, we just have yet to determine what that is.

Maybe they are both wrong. Maybe they are both right.  The beauty and built in catch-all for religion is that the system is set up so that someone always knows more than you. Ultimately ending with God working in his mysterious ways. And the beauty and built in catch all of science is that there always has to be an explanation and if there isn't, confirmation bias explains away most of the universe's mysteries.

I'm not here to dump on either one of them today. If you fall in to either of those buckets, good on you. You do what you need to do to make it through the day. You do your thing and I'll do mine. I'd appreciate the same courtesy, though, of you not dumping on mine.

Here's a post I put on Facebook 14 hours ago, after what I can only describe as a life-changing day.


I am sitting in my silent apartment in awe of the waves of gratitude washing over me.

Today the Universe ushered me over to the curtain and waved its hand in a Vanna White-esque motion. It said, "This is what you think is happening in your life."

Looking around to make so no one was watching and that I was fully engaged, the Universe motioned for me to come closer.

Pulling back the curtain, it said, "This is what it means."

It was beautiful. I was part of something amazing and beautiful.

And my soul hasn't stopped weeping with joy and gratitude since.

Was it a religious epiphany or a deep thought of neurons and synapses firing in a way they had not previously fired?

That's not really the point. The point is, for me, it was a moment of clarity.  The immediate thread that led to this started two weeks ago with a text from a friend. The gist of the text was, "What are you doing on the 8th? Because I'm kidnapping you. Be ready at 7AM. And bring stuff to take notes."

Cryptic, but not nearly as surprising as it might seem, given the source. I didn't question it. I had no doubts about it.

In short, I was open to whatever this event was.  And that has been the key. I realize now, that the openness has been the key all along.  The place I am in my life now, at this moment, is due in large part to me being open to what the Universe was giving me.

Fast Forward to yesterday. At 7:12AM I get the text, "Here." Heading out with my cooler, food bag (I was in charge of road snacks for the kidnapping as it was a three-hour trip one way), and my writing bag, I got in the back seat and settled in. Anxious and excited to see where the day would lead. I knew it was going to be a day of learning and awesomeness. This was confirmed by the next sentence spoken to me. "That's your mocha there, and here's a breakfast sandwich."

Seems like a little thing, but it speaks to the thoughtfulness of my co-kidnappers. There is a small list of people that I would consider to be directly responsible for where I am as a writer (and a human) today. And two of those people were in the car. Kidnapping me to an event that would, again, improve my skills as a writer.

About an hour in to the journey, My face was hurting from smiling so much. I was listening to the two front-seaters sing a surprising amount of show tunes (the driver controls the play list). It was a good start to a great day.

Now, if you know me at all, you know that an hour is a long time for me to go without creating any sort of mischief. So, I pulled out a notebook and a Sharpie and made a note for passing cars. I mean, that's what you're supposed to do when you're being kidnapped, right?

My kidnappers never saw the note, but I'm sure this isn't what they expected it to say. 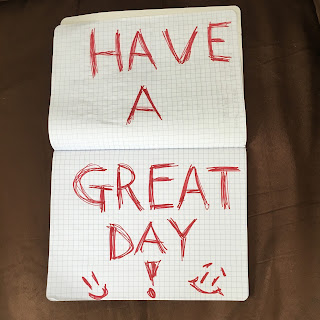 I'm not sure how many drivers on 71-Southbound saw this yesterday, but I hope those that did smiled.

The rest of the drive was fairly on point with a standard road trip (that was anything but) with three great friends. I found out where we were going thanks to the joys of social media, but it didn't matter. I was still as excited. Since I had already done my make-up and hair before being picked up (as I was the last), we switched seats so Monica and Carma could do theirs, not that either of them needed it.

Which meant the play list changed to DJ AM and his amazing "12 Days of Mixmas" set on Power 106 (RIP AM).

We got to Transylvania University (no joke) with minutes to spare and found a parking space and headed up to the workshop.

So...even without the workshop the day would have been amazing. Let me just put that out there. A road trip with two kick ass friends, lunch at Five Guys, and thrifting, Half-Price-Booking, and a frantic search for a wallet all make for an incredible Saturday.

But the workshop. OH MY GOODNESS, YO!

It was on Dialog (beyond He said, She said) with international Bestselling author, Tiffany Reisz.

AND IT WAS AMAZING.

I took 7 pages of notes and mentally found myself going back through my stories and realizing ways to make them stronger.  Moving forward, I expect my dialog to kick ass after the lessons I learned.

The big take-away (one of the biggies, anyway) was that dialog should only be used for two reasons.
That's it. And the third use (a.k.a. the exception to the above two) is if it gets a laugh.

I also learned to not make Harrison Ford sad. Some things you can type, but you can't say.

By the end of the 90-minutes, my head was swimming, but I knew that I had tools to make my writing even stronger. To further my goal of becoming an international bestselling author.

In short, to making my dreams come true.

And I realized as I was sitting there that this was another milestone. This day was another moment that I would look back on and know that it was a key component in living my dream.

I looked at the two people that I was spending the day with and I knew beyond a shadow of a doubt that they were two of the three people that were directly responsible for where I am today in my writing. No. Not just in my writing, in my life.

I won't bore you with each of those milestones, and I won't embarrass them by mentioning every single thing each of them did to help build the author you see before you (because I can list, in detail, every single moment..the clarity is somewhat disturbing in an awesome way), but suffice to say that it is with no sense of hyperbole that I say that I would not even be close to where I am without these three people, two of whom I spent an amazing 12 hours with  yesterday.

So, back to the Universe smiling at me.

On the way home, I was driving as I was really too amped up to sit still in the back seat (and largely because both Monica and Carma had been up since the ass-crack O'dawn).

And I started smiling. Carma asked me why. So I let the waves of gratitude wash over me. And I told them both, live and in Technicolor, why I loved each of them and how much they meant to me and how I knew beyond a shadow of a doubt that I would not even be close to the writer, author, and person that I am today if they were not in my life.

And then I apologized. Because I told them that I was in no way, shape, or form done with leaning on them.

Monica said,"Good. I'm sure Stephen King has people that he leans on."  Of all the authors she could have picked, she picked one of the ones that I have looked to from an early age.

You see, when the Universe puts these amazing people in your life that get you, it delights in reminding you so. Maybe just to see if you're paying attention.

There's probably a bible verse or a scientific theorem to explain that kind of thing.

But to me there's only one word for it.

Have a wonderful day my friends, and don't be afraid to open yourself up to the magic all around you.
-AT

I'm so glad you had an amazing time! You're going to go places. :D

Thank you!!! I'm not going anywhere without my friends, though. We're all on this ride 😊

I had an amazing time, too. It goes both ways, you know. Need I remind you of the "rising tides" conversation we had in the library that day? You help others more than you realize my friend. :) And I must agree. You are going places.

Thank you :-)
I'm still in a daze from the whole day.
hashtag blessed doesn't even begin to cover it.