If you follow me on any other social media (first of all, thank you), you will recognize the above (and below) image(s).

This is the cover for the urban fantasy box set that I am thrilled to be a part of.  There are 15 other amazing authors at various points in their writing career, including USA Today and New York Times Bestselling authors!

I am in some incredible company.

So why call this post the Ninety-Nine Cent Dream?

Because, for ninety-nine pennies, you (yes you) can take an active role in making a dream come true.

Dreams are pretty amazing things. Almost like a virus. When you catch wind that someone has a dream, it sits there and you wonder...wow. that's interesting. What's that going to look like if they reach that dream? What's next?

Because if they fail, then they have proven that dreams don't come true. And when we have evidence that a dream doesn't come true, then it's ok that our dreams are sitting up on the shelf getting dusty.

That's when it gets good.

And you know what? If you're reading this blog right now, you're watching a dream come true.

A little kid from Westerville, Ohio who started writing in spiral bound notebooks when he was in elementary school is about to become a published author.

It has been nearly a forty year process.  And I'm not going to lie. There were times that the dream got put back up on the shelf. Covered under layers of dust, regret, self-doubt and time.

The writing woke up.  The creativity refused to be in hibernation.   Poems, lyrics, blog posts and all manners of my dream brain flexing its muscles.  Like a cat stretching after a long nap in the lazy afternoon sun, it was time to start pouncing on things.

A series of coincidences starting with being invited to an engagement party (and more miraculously, overcoming my social anxiety and actually going). At that party meeting a dude that I connected with on a friendly level. Like I knew I could hang out with him and have a beer and shoot the shit. It wasn't until ten minutes before he and his family were leaving the party that  I found out he was an actual honest to god published author. Yeah. Kick in the head there.  And then, his persistent emails to me for the next three months telling me about a Columbus writing group.

This snowballed in to meeting up with members of another writing group which included even MORE amazing an inspirational people.

So now, two years later, I am on the cusp of being a published author. I am sure my heroes, Asimov, Bradbury, Adams, Shakespeare and the lot are giving each other high fives and simultaneously shaking their heads in pity as another writer enters the fray.

A writer. Soon to be a published author.

This is literally the dream. This is how act one of the dream unfolds. I said last year that before the end of 2017, I would be a published author.  In twenty one days from now, that will be a fact.

I hear people say all the time, they don't know how they got there. Like suddenly their dreams had come true.

That's not me. I can tell you every step. Every decision. Every fork in this long and winding road that brought me to here is etched in my soul in indelible ink.

And I can say with all honesty that those of you that are reading this blog are a big part of that journey.  As a writer, I write for me.  As an author, I'm taking the next step and saying, "Here. I wrote this for you. It started out for me, but I'd like you to have it."

That's where the ninety-nine cents comes in.

The other authors in the set and I are doing a big pre-order push on Amazon today for the box set.
And if you're going to get it anyway (and I hope you are), I would ask that you head over and order it today.

The main reason is this. The pre-order sales numbers help give us visibility and add to our 'stickiness' on Amazon searches. So that if someone just searched for 'Urban Fantasy,' we would have a greater shot of being in those search results based on the pre-order sales.

I know it doesn't seem like much, but ultimately it's about ranking. And part of this dream of being an author, for me, involves just being an author. Full time.

So there's my pitch.  For 99 pennies you can have an active role in making sure this dream unfolds to its full potential.

And how many times in your life can you say that you play an active role in fulfilling someone's dreams.

Whether you click on either of the images or this link (https://www.amazon.com/dp/B06XXKFS3J) to go order, or if you're just sitting on the sidelines, or waiting until later, I thank you.

Thank you for the role you played in me getting here.

And thank you for letting me tell you a story.

If you like my debut novella, SHADOW INITIATE in the box set (or if you didn't), leave me a review.

Either way, I'm going to keep telling stories and living this dream that we've just unfurled. 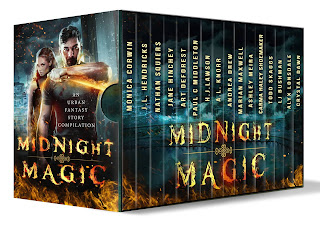 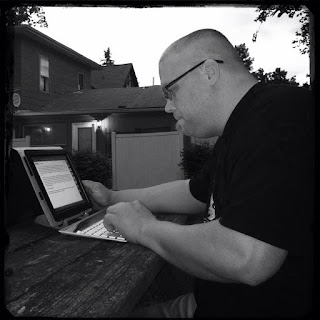 Soooo proud of you, brother. I'm anxiously awaiting April 25th so I can read this great work!

Thank you, brother. It is the first of what I hope will be many for you to enjoy!!