There is a popular idiom regarding 'drinking the Kool-Aid.'  The currently accepted meaning and usage of this is to represent believing with unquestioning acceptance what someone in authority is telling you.  If you 'drink the Kook-Aid' then you follow, almost blindly, whatever is being fed to you.

The reference comes from the Jonestown massacre where followers of cult leader Jim Jones were ushered in to the hereafter upon consumption of cups of Flavor-Aid laced with poison.

I have always had issues with the phrase itself. Partially because it's inaccurate (although "drinking the Flavor-Aid" doesn't really flow off the tongue as easily. I wonder if it was some twisted PR rep at Kool-Aid that subtlely twisted the narrative (but that's the cynic in me).

The second thing that always bothered me is that the phrase has now come to represent merely being a follower. A lemming. If you're going to accuse someone of drinking the Kool-Aid (or Flavor-Aid if you will), then that should mean "HEY! DON'T DO THAT OR YOU WILL DIE!!" At least that's how it should work in my twisted noggin.  Maybe that's why it's always Kool-Aid in the phrase...because it wasn't actually Kool-Aid that was the death delivery system.

What I do know is that I started off this post on a completely different tangent than I had intended.

In looking at my notes, I had written "Drinking the milk vs. Adding More Cereal." And yet, my mind automatically finished the phrase "drinking the..." with the word 'Kool-Aid.' So powerful are idiomatic expressions in our culture.

Now I'm sitting here at lunch trying to rein my brain back in to what I had originally meant in my notes regarding cereal and milk.

Please bear with me for a moment.

OH! I remember. It had to do with how we approach life in general. Now...I just need to remember what each aspect represented.

I think that in life we are faced with situations. These are given to us like a bowl of our favorite breakfast cereal (or in some cases our least favorite).

We have a bevy of choices facing us when eating cereal. Do we eat it slowly or quickly? Do we savor it? Do we hurry through the bowl to get on to something else that we perceive to be more worthwhile than the acerel I really enjoy like Cap'n'Crunch, I will eat as much of that as possible. Sometimes even more than is actually good for me.

I will eat quickly so the cereal doesn't get soggy. Pro-tip, this also uses less milk because the milk has yet to soak in to whatver cereal you're eating (you all know about that milk bloat that most cereal gets when you leave it sit in the milk too long).

I know I should probably take the bowl to the sink at that point, acknowledging that whatever moment I should be enjoying has reached it's natural conclusion and it's time for me to move on.

And sometimes I do. Usually I will drink the milk before putting it in the sink. Although these days I do that less for the simple fact that I don't drink as much milk as I did in the days of my youth.

Sometimes, though, I do something whacky. I get the cereal box.../i and I add more cereal to the bowl!!

Usually this first addition of cereal is not accompanied by additional milk. It's dumped in there, dry. Whatever milk is in there is in there.

If I plan on having a third bowl, though, I will add milk on the second cereal pour.

I know you're asking yourself what this has to do with life. And truthfully I don't know. I don't even know if it really does.

I just noticed somewhere along the way that there are events in my life I want to drag out and others that I want to be over as quickly as possible. I'll either wind up eating 1/2 of that cereal in one sitting because I can't get enough of it. Or I'll eat it as quickly as possible to get through it (sometimes I won't even drink the milk).

I know. I'm not sure where it's going either and maybe I need to re-visit the whole Kool-Aid thing again. At least that train of thought had some teeth.

No matter. I'm almost through with lunch anyway.

I know you can't tell, but I'm actually writing this on the AlphaSmart NEO2. You see, I have a wild hair that at some point I want to get the FreeWrite. It's supposed to be this awesome distraction-free writing tool. It is an AlphaSmart on roid-rage. BUT...it's also $500. And that's a lot of dough to spend on something that I'm not entirely sure I would really use to its full potential. Enter the AlphaSmart. Also a distraction free writing tool that I got for about $40.

So the current plan is to use the AlphaSmart in the situations where I think I would have wanted to use the FreeWrite. And, if I get to the point where I have an extra $500, then maybe I'll know that I can make it work. If I'm only doing blogs on it, that's just not going to work for me.

This is one of those instances where there is a new cereal I'm dying to try, but I have a cupboard full of cereal, a fridge full of milk, and no money to buy anymore cereal at the moment.

So we'll see how this plays out. After all, I certainly have no desire to drink from the cooler of non-carbonated soft drink in that regards.

And with that, I should probably get back to work. 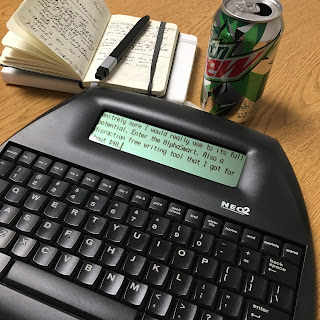