Admittedly, I should be inside cleaning my apartment. It needs it. The walls are angry with me, I can tell. There is that telltale clutter that perfectly illustrates genius bordering on insanity. Or at the very least, delusions of the creative genius.

I will get to the apartment later this evening.

But it's time to write now. I'm sitting at my little bistro set on what can barely be called a patio. It's 59 degrees and there is a nice autumn breeze. I know it's spring, but this breeze is definitely an autumn breeze.

Here's a bit of what it looks like at the moment. 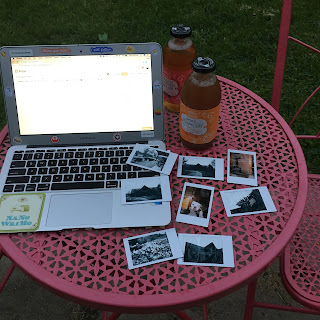 Nice and cozy. It smells like it's going to rain soon, but I haven't checked the weather app yet to see. That would just put too much pressure on me to try to bang out some half-assed blog post before the clouds opened up. And by half-assed, I mean more half-assed than normal.

I feel like today is actually the end of an amazing week.  So many incredible things happened in the last 7 days that I still am not convinced they are real.

On April 25th, my debut novella, Shadow Initiate, appeared in the Midnight Magic urban fantasy box set. If you don't have it yet, you need to jump on that. After tomorrow it will only be available on Amazon and it will no longer be the pre-order/intro price of ninety-nine pennies.  But I digress.

That's what I became last Tuesday.   I could easily pen a dozen posts on dreams coming true and as many more on the people in my life who directly and indirectly led me here. And I probably will.

Tonight is about Marvin's.

A lifetime ago, my freshman year in college was spent at a fine liberal arts college nestled in the god-fearing town of Greencastle, Indiana. I'm not sure why DePauw was on my list of schools to go to, but I got in.  I made a mess of the first half of my freshman year and then turned it around the second half.  The economy and lack of grants conspired against there being a second year at DePauw, but that's OK.  One was enough to experience Marvin's. 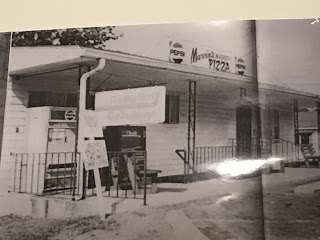 To be fair, I think the whole year I was there I only actually ate inside Marvin's one or three times.  It wasn't necessary, nor was it really encouraged. You see, because MARVIN'S DELIVERS!  In the dorms, at 130 in the morning after a long night of....studying...you get the munchies.  And Marvin's delivers. I had the number memorized.  And the order was almost always the same.  Usually though, you checked with your neighbors and friends in the dorm WHO WERE ALSO STUDYING LATE to see if they wanted anything from Marvin's.  And then you ordered. And you didn't have to go pick it up. Because after all of that intense STUDYING, you might not navigate the dark campus streets so well.

That was the thing. Marvin's Delivers.  There were pictures plastered all over the walls of DPU Alum with a big sign stating that MARVIN'S DELIVERS TO and then whatever exotic location all over the world they happened to be at.  It honestly rivals the OSU Alum doing the O-H-I-O everywhere. Trust me, I've attended both Universities. I know what I'm talking about.

We pulled in to the parking lot at Marvin's.  Wait...PARKING LOT? Yes. Parking Lot. From the outside, Marvin had all the markings of a respectable small town sports bar. We could see the many TVs broadcasting their testosterone fueled siren song through the open slatted blinds on the windows.

My fears were assuaged when we walked in. Immediately in the entrance-way we were greeted with walls filled with "Marvin's Delivers To..." pictures from around the world. And for the umpteenth time that week, my eyes filled with tears of joy.

A piece of my history that I didn't think I'd ever get a chance to revisit was wafting over me like the smell of well used fry grease.

The banner that I'm standing in front of was there, at the Marvin's of my DPU days.  Seeing myself in front of it, I briefly entertained the notion of dressing up as Marvin for Halloween, but only like 4 people would get it and 2 of them are out of state and wouldn't see it. 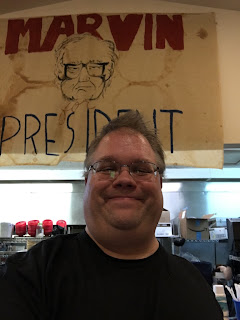 After convincing the young co-ed behind the counter that yes, we really did drive 4 hours from Columbus JUST for a GCB, we ordered. It was like no time had passed.

"Oh...I know." I smiled the knowing smile of one who was going to use the extra cheese sauce to dip his GCB in.

I looked. They didn't serve Pepsi products anymore.  I couldn't order my liter of Dew.  That was the order. "GCB, Cheese Fries, Liter of Dew." I opted for a regular fountain drink (of which I made a suicide, so it was still like a trip back in time).

None of that mattered when they brought it to the table. 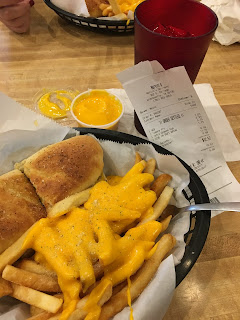 You will notice the receipt. This required special dispensation from the shift manager sitting behind us in the corner booth. No one at Marvin's is allowed to keep their receipt.  If a receipt is lost and recovered by a drunk college...er...a student who has been STUDYING all night, they can come up and claim they never got their food.   I had to promise not to leave it behind.

After toying with some of the fries for a bit, I dove in. 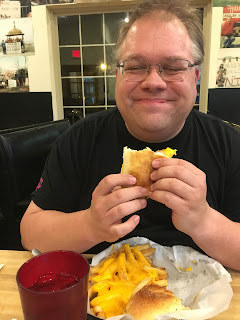 This look is not staged. It's the real deal. That is literally how happy I was. I had lost count this past week of how many times I was living in a moment that I never thought would happen.  Is having a GCB on the same scale as becoming a published author?  For me, in some ways, yes. What you see here, and it's a lesson I am reminded of over and again, is someone truly living in the moment.

I am experiencing bliss and living in that moment.  If you asked me a year ago if I thought I'd ever have a GCB again, I'd tell you no.

And it was every bit as amazing as I remembered. 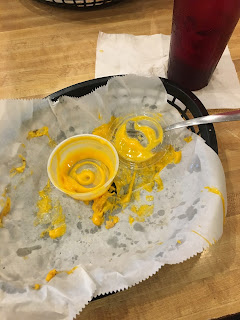 And the sadness in the basket above at it being gone wasn't really sadness anymore. It was the knowledge that I had thoroughly enjoyed something as simple as a burger and cheese fries.