Giordano's, A Tale of Family

There are so many amazing little nuggets that happened in the 2 1/2 hours between 6:15 and 8:45 tonight that I'll likely forget something. And then I'll probably owe Ross even more money. Or pizza. Or Beer. Or a Get Out Of Going To IKEA free Card--although he might not go for that last one after hearing Alex talk about their cinnamon rolls.

Lest you think this is some weird FanFiction about the time Ross and Rachel were on a break and he went to IKEA, let me stop you. It's not. Although...excuse me a moment...*gets pen and jots a few notes down* Right. Where was I?

My Second Favorite Pizza in the Whole World (so far).

The funny thing is, my two favorite pizza joints in the world (so far) could NOT be more diametrically opposed. Growing up in Westerville, there were a few local mom and pop shops. My favorite was Rofini's. Thin crust with the pepperoni that cooked up in to little upside down dart cups of grease. If you want to get down to brass tacks, it probably wasn't great pizza by any means, but I loved it. It always reminded me of Westerville. Even as an adult. I love Rofini's.

Loved.  It's gone now. Owner's decided to sell after 40 something years (or so it seemed).  I will never forget Rofini's.

But, since it closed up, my number two favorite pizza joint in the whole world (so far) became my Number 1. And it's fitting. They apparently already had the boxes ready for the transition. 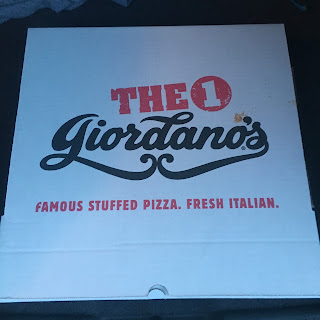 Now, I have made no secret of my love for this amazing pizza pie. Hop back in time to a post from March 2016 to get the full Giordano's in my life origin story (http://www.toddskaggswrites.com/2016/03/it-was-twenty-years-ago-today.html).

Regular readers of this blog will know that I don't usually do things in any kind of order on these pages, it really is a stream of random meanderings. Tonight is no exception.

As I was driving home, I came up with a dozen great opening lines, but the line I wrote down at the bar tonight was, "Shit, now I owe Ross money."

I knew this past Sunday as I was heading to brunch that something special was happening. I saw people in red shirts go in to Giordano's. I got excited. We were close enough to lunch that I could've easily had a light breakfast and a heavy lunch. But Tim (probably not his real name) told me that Sunday was a training day only and that the "real" opening would be Tuesday. And by "real" he meant the soft-opening which is where the restaurant gets used to dealing with public types and not just the people on the payroll. Role playing is over and it's game on.

Fine Tuesday. I could wait.

Then Tuesday came. Which, if you're reading this the day I wrote it, is today.

I was leaving work today and thinking, "You know what? Sure. I have tasty leftovers in my fridge, but dammit, Giordano's is opening today."

I grabbed the Alphasmart Neo2 and headed out the door. I knew it would take at least an hour from when I ordered my pizza and I figured it would be some great writing time.  Little did I know it would be so much more.

I got there and walked in and was instantly greeted by the awesome Candice Lee. She had put her order in when they put their name in for a table (which...is a great pro-tip. The pizza takes an hour. Put your order in when you give them your name and you'll be ahead of the game). We talked for a bit and then it was my turn to give my name.

Shit. What was my name.

No. That wasn't my name.

My name is Todd.

Oh crap. She asked me how many.  One.

She said would be a 40 minute wait or I could go right to the bar and order and eat there.

I bopped back to the car to get my phone, my idea journal, a hard copy of a story I'm working on, and a pen. I knew there probably wouldn't be room for me with the Alphasmart, so I went totally analog.

I quickly glanced the bar.  Wedged between the disinterested whatever the hell they call goth girls when they grow up and a tattooed couple was the dreaded corner stool.

You know the stool. It's the one stool that always gets shoved in to someone's knee or used as a buffer to keep people from getting in to the bar.

But fuck it man, there was pizza to be had.

I asked the bald, ginger bearded dude with two full sleeves if the seat was taken. He gestured to the stool as if to say, "clearly it's empty, but Wednesday might have something say about it."

I looked at grown up goth and she nodded indifferently.

Awesome. Wedged in there, the hostess handed me the menu. The bartender came over and asked if I needed a minute.

A beer? Yes I need a beer. I said handing her the menu.

I ordered a Guinness blonde. No doubt influenced by the signs they had for it over the bar.

Guinness in a bottle? she asked me?

They didn't have it, but they had Goose Island 312 on tap.

And I put in my order for food right away. I knew what I wanted.

Stat, of course meaning in about an hour. You can't rush perfection and the bake time is 30 minutes by itself.

I have a confession. I'm something of an introvert. BUT...in social situations. I often insert myself in to conversations with (I think) hilarious and sarcastic side comments about the common situation I find myself in with complete strangers.

If they give genuine laughter back my way, I keep going. If they give that 'pity smile for the homeless guy' grin to me, I shut down.

I don't remember the comment that got me in with Alex and Ross....oh...shit. Yes I do.

One of the managers came around canvassing and asking about our experience. And, as often happens, no one assumes I'm actually out alone.

From there conversations happened. Coincidences and moments of "no freakin' way!!" soon followed. And what I find hilarious is that it was a good hour before we even exchanged names.

I'm gonna sit on a few of the memories, since I'm still basking in them right now (it was really that cool of an evening).

Beer is proof that God loves us, per a one Mister Benjamin Franklin. Goose Island 312 is as much a confirmation of that theory as anything. 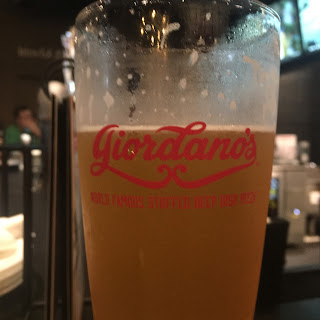 Started off with an app roasted garlic fries. They are every bit as delicious as you think they would be. And they came out quick. I offered some to Alex and Ross (before I knew their names). 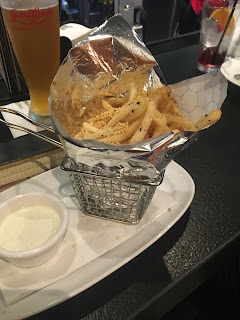 My pizza. This is a small. They teased me. The brought it ALMOST to me and then the bartender stopped it. I was sad. She said they needed to make sure it was mine. I told her that it looked like mine. 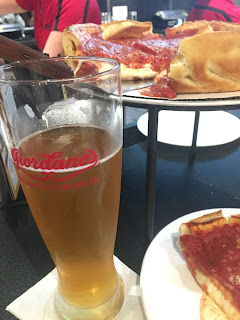 It was mine.  This is a SMALL. 6 sliced.  I ate the slice you see plated. And one more slice. Yes. 2 slices. Of a SMALL. So dense and amazing. 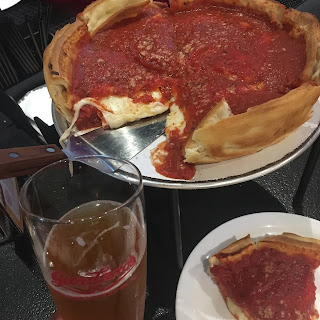 So...my bill was a little higher than I had thought it would be (damn Goose Islands...) BUT...I was there on the first night they were open to the public. With pretty much a restaurant full of people who have been waiting over a year for this place to open. Mainly because we have all been to Giordano's at least once.

Except the lady who came in just before my pizza game out.

She was on her way to buy a bottle of wine, and saw that Giordano's was open. So she came in and came up to the bar, taking the stool previously occupied by grown up goth That's not fair. She wasn't really that goth. But that's the first thing that came to mind.

Anyway...young miss professional asked for their wine selection and picked something of the white grape variety.

My pizza came out. Remember, it's a small. For just me. And she asked if I had ever had the pizza there before.

Here? Um, no. They just opened 3 hours ago. I had it in Chicago. Pretty much along with the entire restaurant full of people and the 20 outside waiting to get in.  I offered her a slice of heaven (if you know me, you know what a huge gesture this was--offering pizza to a stranger. OK...if you really know me, you know I'm a sucker for a nice smile and so that's no so odd.) But....dude. Pizza.

And she said no.

She was there for a glass of wine.

Even Jane and Todd (another couple we met that night) were stunned. Apparently Jane had gone so far as to already beat me to the punch and offer her a slice of my pizza before I did. You read that right. The bond with Giordano's lovers is so tight that they will go so far as to offer strangers a slice of your pie.

Now...I'm going to level with you. I have a very hard time trusting someone that comes in to a pizza place-ANY PIZZA PLACE-and just gets wine. That shit just didn't make sense.

Sure, she said she was full. Maybe.  Maybe she had some kind of weird pizza intolerance. OR...maybe she was an alien. Which...if that's the case, seriously, rock that shit. I'm wearing a Stan Lee shirt for crapssakes!! If anyone is going to be in to the whole alien thing, it's a geek like me.

But no. She did not fall prey to the sweet deep dished siren and left after one glass of wine.

Incidentally, she is the reason that I owe Ross.

But that's a story for another time.