If you have taken the time to actually read through the user agreement associated with your Bookfacing account, first let me offer my sympathies. The thing is beastie and dry and somewhat convoluted.  But, it does detail things that can cause the big Blue F to put the smack down on you, account wise. The punishments range from a virtual slap on the wrist to being banned from the social media site altogether.

I had a friend locked from posting for 'liking' too many posts. Another for putting too many URLs to other sites, so the offenses can run the gamut.

I awoke yesterday morning to find that I had been put in to Facebook Jail. I had, somewhere along the way, violated the terms of service of the book of Face. It was a valid infarction and I own it. What it was isn't as important as the effect it had on me for the next 24 hours.

Because of the violation, I was barred from posting anything, commenting on anything, even hitting the 'like' on any post for a period of 24 hours.

My initial reaction was panic. The reaction immediately following was to see how far reaching this was.

I tried posting. I was taken to a page that would allow me to dispute the sentence. Nope. No dispute. Like I said, I owned it. So, moving on.

I tried liking a post. Nope. There came a little popup that said "You're in Facebook Jail. You broke a rule and now you can't do shit for the next 24 hours, except look at stuff."  I'm paraphrasing, of course, but that was the gist of the pop-up.

I tried posting something from Instagram and sharing to FB.  No joy. That didn't work either. The only thing that worked was Messenger. Which, really wasn't much help for my Social Media jones.

Facebook for the 24 hours would be, in essence, Read Only for me.

There were exactly 3 times that it sucked. But for the rest of the time, I have to admit, it was glorious!

In marriage counseling, it sucks. But on social media it was actually pretty cool.  There were a couple of posts that had triggered some snarky responses on my part, but I couldn't say them!! And now, a day later, it doesn't really matter. Whatever it was that annoyed me about the post, is done and gone.

So I spent the day scrolling a bit and thinking, "wow, that's nice" or "oh man, that's sad" or the ever popular "what a douche."  It was honestly no different than what I normally think when I'm scrolling the feed, but now, knowing I couldn't reply, I just looked, had the thought, and moved on. There wasn't really any engagement on my part.

I found that I checked the book of face a lot less during the day, too. I would reach for my phone and think, well...doesn't really matter, I can't reply. So, when I did check it, I would see how many things I actually needed to reply to and used Messenger for that. The long and short of it...1.  1 person that I needed to actually contact directly about something they had posted.

I kept waiting for people to ask me if something was wrong because I wasn't promoting a friend's book or posting geeky shit. But no one did. In truth, I'm sure no one noticed. I'm not saying that to elicit a reaction, it's merely a statement. We are all inundated with so much information on the feed that the reality is, if your friend's list is over twenty people, you probably won't notice if one of them drops off, unless you make it a point to look at their feed often.

In a way, it was kind of cleansing. And it was a lesson in the power of waiting before you reply to something. So often I see keyboard commandos just firing off responses from the proverbial emotional hip and rather than create any kind of meaningful dialog, it just winds up being incendiary and divisive.

I'm done, I've been released from the social media drunk tank and release on my own recognizance and I think I've learned something.

I don't have to immediately reply. In fact, sometimes it's actually the better course of action. As Mark Twain said, it's better to remain silent and thought a fool than to open your mouth and remove all doubt.

I'm doing something extra special today, I'm giving you a twofer.  That's right, you don't just get one Lunchtime Bloggy Blog, but today only, I'm throwing in a second Bloggy Blog mostly unrelated to the one you just read.

So...I've started doing hashtag bullet journalling. Hashtag Bujo, if you will.  Which for me simply means that instead of the daily/weekly/monthy/yearly lists that I would normally make in my Moleskine journals, I'm making graphics and trackers and charts and of course lists.  Now, that's not to minimize it. It is merely to say that I don't exploit the full phenomenon and potential of the bullet journal movement. I have friends that do and they rock the shit out of it. What I do works for me, and that's pretty much the underlying sentiment Do What Works For You. If you don't like it, fuck it. Change it and try something else. That is an underlying sentiment I can get behind for sure.

That being said, I put together a tracker for my August Writing Goals. It looks exactly like this: 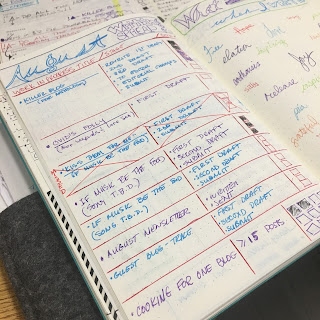 A couple of key entries there are the story "Killer Blog" and the pieces for If Music Be The Food, an awesome project helmed by Jack Wallen (check his stuff out here). But, even in posting this, I can see that I had lofty aspirations for August.

August that only has six days including one weekend left in it.  As you might have noticed,  I'm woefully behind on my posts for this blog. In order for me to hit my blogging goal, I'd need two posts a day until the end of the month.   Not sure that's going to happen. But we'll see.

I can still hit another IMBTF post if Jack posts a song Monday.

I can (and will) still write a guest spot for my friend Violet Patterson's awesome blog (check it out here), so we're good there.

Kiler Blog is now in the editor's hands, so I'm at her mercy. Not much I can do about that now.

And then we get to Ovid's Folly. My story for an upcoming Mythology Box set coming out in December. I know, you're thinking Todd...it's only August...why are you worried about that now?

Well, I'll tell you.  November is already booked. And half of the weekends in both September and October are already booked. I need to get a head start on this. I am excited about the story line and want to make sure I give it the time it deserves.  I'm done phoning shit in (obviously this blog is excluded from that, since I feel like I'm pretty much transcribing a conversation I'm having in my head with you, my intrepid reader, and well...that's pretty much like phoning it in, isn't it?).

So...I will make a September Writing Tracker. I think I'm going to make it a two-page spread and include daily and weekly milestones (word counts or chapters or something).

Also...exciting news...I will be putting out Shadow Initiate as a stand alone novella.  I'm pretty pumped about the cover, which looks like this: 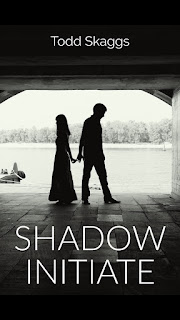 It's not my first cover ever (I'm counting the cover on the box set as my first actual cover), BUT it is the first standalone cover for something that's just out there with my name dangling in the wind.

Oh...I almost forgot. I have started editing The Treachery of Rainbows. For those that have been asking about it (Jamie and Monica), I'm sorry to have kept you waiting, and now that I know what it feels like when someone asks (rather insistently) "When are you going to finish insert title here?!?" I promise to stop asking that question (at least in that way).


And there you have it, my friends, your lunchtime twofer.

Here's hoping the rest of your day is awesome and that your weekend kicks much ass.

And remember, be safe out there!